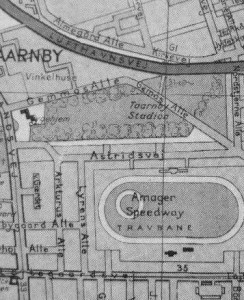 A Taarnby map showing the speedway in the infield of the trotting track.

At the opening of the track September 4th 1952 the text below could be read in the race programme. (Translated and shortened by Søren Kjær)

“Today a new era in the history of Danish motor sport begins. You are spectators at the opening of Denmark’s first genuine speedway.

Since day one it has been the motor sports people’s greatest wish to create a first class track which they could solely consider their own, and today the result of yearlong efforts are presented. – Denmark’s first and until now only real speedway “Amager Speedway”.

The objective was to build the optimal track where this particular branch of motor sport could fully unfold. In every aspect the job was based on knowledge gained from studies of events as well as tracks in England and Sweden.

The resilient wire mesh fence has been abandoned and replaced by a wooden fence. A kickboard of 10 inches height surrounded the track itself in a distance of 5 meters from inside the fence. Thus a rider going too wide in a bend will first hit the kickboard and have a chance of correcting. If t failing and falling over the kickboard he will still have 5 meters left before hitting the fence. Furthermore he would find himself in a neutral zone with little risk of being hit from behind by other riders.

The start area is provided with an electric start grind, and the gates are tarmac surfaced.

The top layer is a mix of cinders and soil, which at the Charlottenlund horse track had proven very durable, and it is hoped that it will produce a hard and even track surface not prone to ruts and holes.
The length 333 meters is the one found most ideal, and the bends are given sufficient with to allow passings from behind without the dangerous moments that often occur on narrower stadium tracks.

Behind the entire job is the organisation “The Motor Club’s Track Foundation” of 1945 consisting of 9 cooperating motor cycle clubs (see note). It has raised a fund of 150.000 DKK, which has made the building of Amager Speedway possible.

The motor sport has got a home, and the stage is set for Danish motor sport to live up to the great traditions from the pre war time, and we can revive the unforgettable hours on the old track at Roskildevej in the heydays of Danish Motor sport.” 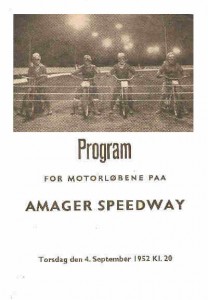 This is the original meeting programme from the opening night.

The first year after the opening saw a great number of events on Amager Speedway, A. o the “Golden Helmet” and the Danish speedway Championship. 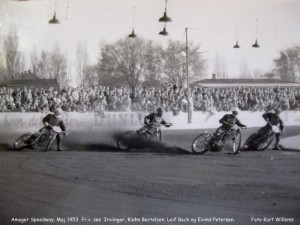 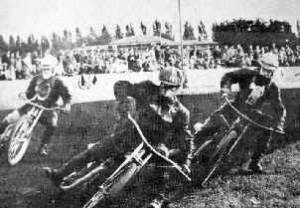 Owe Fundin trailing Kiehn Berthelsen, Irvinger tries to follow on the outside. 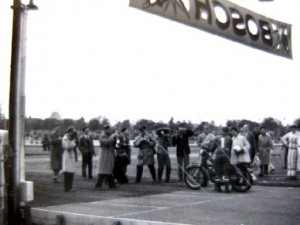 Photographers gathering at the gates in front of Kiehn Berthelsen,
who prepares for the lap of honour.

Lap of honor with the”Golden Helmet” and
the popular actress Lily Broberg sitting behind.
The JAP racer was replaced by a more peaceful
Nimbus street bike. 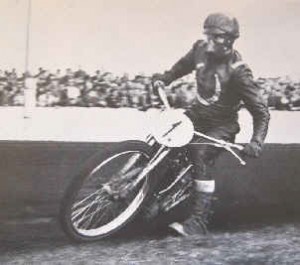 By the opening of Selskov Speedway at Hillerød Amager Speedway lost its status as “the National Speedway Stadium of Denmark”, which obviously led to a lower level of activity. However still many meetings wre held there, as can be seen below.

These 8 riders proceeded to the Nordic Final. The best Danish rider Kiehn Berthelsen got the reserve place ahead of Leif Bech and Arne Pander. 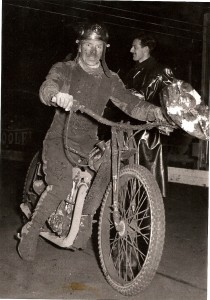 Ejvind Petersen with the Golden Helmet

The team from Amager won the Danish Team Championship in 1958 with 7 match points ahead of the team from Funen with 5 match points. Kurt W. Petersen was the team’s top scorer with 29 heat points. Note the horseshoe on the jacket, referring to the home track at Amager trotting track. 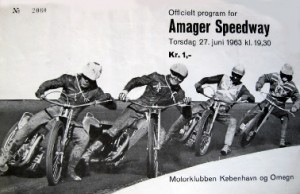 The very last event on Amager speedway got staged on June 27. 1963.
This is the front cover of the last programme.

The report from this meeting does not tell much. In the Expert class Aake Andersson and Evert Fransson from Sweden met Kurt W. Petersen and Poul Wissing from Denmark and Sverre Hartfeldt from Norway

If you posses any informations, stories, pictures or other material regarding this track,
you kindly would make available for this website, please do so by proceeding
to the contact page or by using the e-mail adress: sk@speedwaylife.com
Thank you very much in advance.