The meetings got organized by Aabenraa and Sonderborg Motorsports club (ASAM)
From 1946 and several years after the Aabenraa Stadium hosted many fine speedway meetings, often with participation of German riders, whose bikes and other material lacked quality due to the poor financial situation i Germany shortly after WW2. In that respect, the Danish riders were better off.

Exactly when the Stadium closed as a Speedway is not known to this site, but there are reports that in 1955 it was still active. From 1956 and on no meetings are reported. 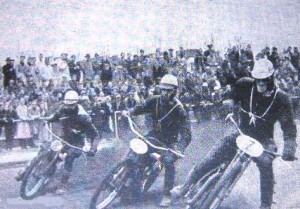 If you posses any informations, stories, pictures or other material regarding this track,
you kindly would make available for this website, Please do so by proceeding to the
contact page or by using the e-mail adress: sk@speedwaylife.com
Thank you very much in advance.