Holsted’s first speedway track was placed west of the town in the terrain at Goerklint close to the Holsted stream.

Its origin is almost unknown, but according to Holsted Speedway Klubs 25 years jubilee script an earlier motor club in Holsted, named Holsted Motor Sport on favorably terms leased the area as early as in 1956. The track got digged out by volontary manpower from the members. Neither safety fence nor other facilities were present in the beginning. Gradually the surface got stabilised with cinders from the Skaerbaek power plant at Kolding Fjord.

In 1969 a safety fence in shape of a grass covered earth wall got built . Although the track was not accepted for public attendance, it got intensely used by the members for practicing on bikes and mopeds.
What later happened to Holsted Motor Sport, and when the club closed is unknown, nothing is filed anywhere.

Holsted Speedway Klub got founded on  November 5. 1974 and Kurt Bogh, an active rider himself who earlier used the track almost as his private practice track, got elected as the first chairman. Swiftly the track got practice track for all members. Immidiately the new club applied for adoption in the Danish  Motor Union, who reluctantly  accepted the track, although only for meetings without public attendance.
In 1976 Danish  Motor Union threatened to close the track again, saying it was too short. A dispensation got given and year by year prolonged until the track got abandoned in 1989, when the club moved to the new track.
In 1969 an open referee’s stand got built, from which the start tape could be released manually. This got in 1974 changed to a wooden shack and electric release, and in 1976 a wooden safety fence got erected.

The terrain sloped down towards south and the gates were placed on the western straight. The downhill start gave the riders very high speed into the first bend.
Between the fence at first bend and the stream there was only a narrow pathway approx. 1 meter wide. Stories are still being told about riders that after hitting the fence unwillingly got a cold bath in the stream.

The track was 260 meters long and were used for 500 cc as well as for 50 and 80 cc.
The uncrowned king of the track was Kurt Bogh, who developed a racing style that made him close to invincible on this track. 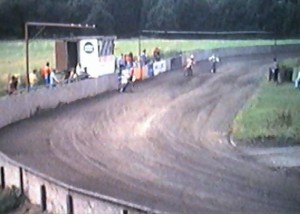 The shack with the referee’s box 1977 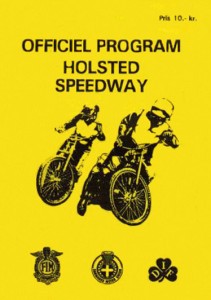 Although the track has been abandoned since 1989 it is still
possible from the air to recognize the outlines of the track.