The Dirt Track at the Braendkjaer Farm near the city of Kolding was opened on June 19. 1932.
The Mayor of the city Kolding gave a speech at the opening..
The track was built and owned by the owner of Braendkjaer Farm, Mr.Ingvard Hansen – a man of strong will and determination, who had 15 men to do the construction work. Furthermore he held the chairmanship in the Dirt Track Club. (Initially Kolding Motor Klub was not involved)

Representatives from the dirt tracks in Vejle, Aarhus and Odense were met at the opening ceremony together with notabilities from Jutland Motor Union and Danish Motor Union.

The track was 400 meters long and cinders surfaced. There was a grandstand with 1500 seats. The opening was attended by nearly 7000 fans.
Partly the construction material was bought second hand from the Roskildevej Dirt track in Copenhagen which from 1932 to 1933 lay idle..

The track was located south of the Agtrup Road between Frederik the 7th Road
and Braendkjaer Street, facing the South Circular road, which at that time
was not yet built. The X on the map shows the approximate position.
The farm itself got removed in 1958, and the whole area has been developed.

A number of the best Danish riders like Morian Hansen and K. Hansen together with the local riders Tranbjerg, Bojsen and Hoegh and the popular German rider from Hamburg Alfred Rumrich attracted numerous fans.

The opening meeting began with two track record attempts, where Ejnar Knudsen from Copenhagen in the special class got the official time 1,35,4, and Gunnar Jensen from Aarhus rode his Triumph in the standard class in 1,38,3 min.

In a match Denmark v. Germany K. Hansen in the first part got the winning time 1,28,1. All 3 finishing riders came under the official track record. German star Alfred Rumrich really had a bad day with crashes in the first two parts and an engine failure in the third. Denmark won the match over Germany 10 – 4 p.

Rumrich got revenge in a meeting on June 23. same year by winning a crack race in 3 parts with flying start with 8 points ahead of Morian Hansen 6 p. and K. Hansen 4 p. 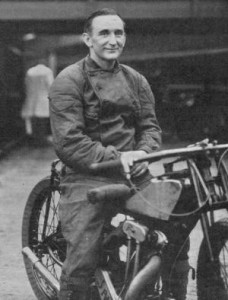 The German Champion Alfred Rumrich was
a popular visitor to the Danish tracks. 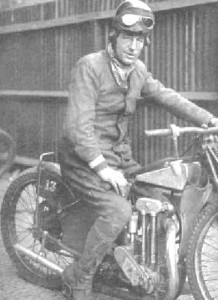 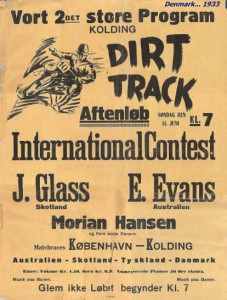 June 11.1933. Programme cover from an international meeting in Kolding

In 1933 the Danish Government imposed an entertainment tax of 40% on the entrance fee, and in march 1934 the Supreme Court issued a verdict saying that Dirt Track was not sporting events and therefore the tax had to be paid not only by this track but all Danish motor tracks whatever Dirt track, Moto cross or road racing.
When the tax later got raised to 60% it only made life for the tracks even more difficult, and caused an early closing for several of them.
The final meeting on the Braendkjaer track was ridden on May 13. 1934.