Hvidsten is a village approx. 7 miles north of Randers city on the main road to Mariager. The village’s road inn is particularly known for its role in the resistance against the German occupation of Denmark in the war years from 1940 to 1945.

In the early 60-ties a speedway got located a good mile east of the town. See map below. This track got from 1968 to 1973 utilized by Aarhus Motorcycle Club as home track for the club’s two speedway teams the Pirates and the Pythons in the Danish team tournament. The members of the club often called in at the inn through those years. The track curator was Karl Hansen who ran a retreading shop in Hvidsten. 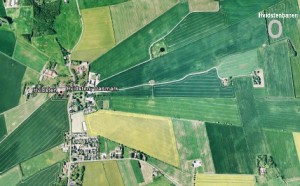 A satellite view of Hvidsten village. The speedway symbol is drawn
in the upper right corner, positioned approximately
as shown on the air photo beneath 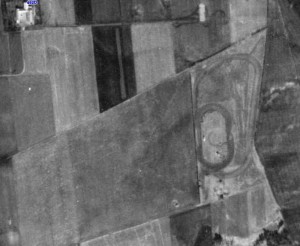 Air view of the Hvidsten track in 1965.The property in the upper left corner
is Mariagervej 492 D. Around the speedway the nearly pear shaped
outlines of the car track are visible. 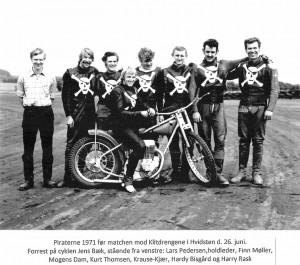 The Pirates from Aarhus at the Hvidsten track in 1971 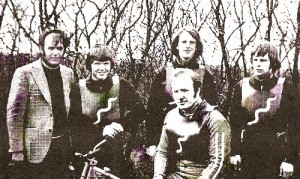 Karl Hansen (nicknamed Rubber Karl) and his wife Else moved to Hvidsten in 1957 and settled down on
Mariagervej 497 until 1990.

Karl observed some youngsters motor racing in an abandoned quarry. He did not like that, because there was none to look after them, and they did not wear helmets. This was particularly dangerous as they had to ride on the main road to and from the quarry. The youngster began seeing Karl, when their vehicles needed repair, and Karl began to help them. Karl also felt that they needed a proper track to ride on, which he then built with assistance from some local farmers.

The first track located behind the property Mariagervej 492 C was merely a stubble field, which they borrowed until it should be plowed. Then Karl leased a field from the farmer Axel Winther. When Axel Winther sold his property, once again the track had to be moved, because the new owners did not want to renew the leasing agreement.

Karl Hansen on his own JAP bike.

Finally in 1962 Karl had established a proper track with a homemade artificial light installation, so the track could be used also after sundown. He had covered all expenses himself by swapping things until he got what he needed. The rent for the area added up to DKK 600,- per year,

Cars as well as motorcycles utilized the track. Karl is watching.

The track was not supposed to be profitable. It should only balance the expenses, so the fee for riding there was a mere 5 to 10 DKK for a weekend. 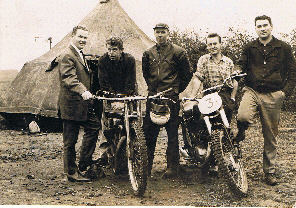 From left: The riders from Randers Gunnar Andersen and Knud Horup.
In the middle Karl Hansen, to the right Hilmer Jensen and John Jensen.
In the tent behind was Karl Hansen’s homemade power plant.

Else and Karl often traveled with the Pirates, among others to Sweden, where the Pirates had a friendship club.
Before Ole Olsen began building his own track at Vojens, he called in at the Hvidsten track to look how I was made, and he also rode on the track.

Aarhus Motor Klub abandoned the track after the 1973 season. After that, the track got demolished.