Grindsted Speedway Club (GSK) was founded in 1984, and in the club’s first years of life until it could open an approved speedway track, it mainly focused  on grass track racing in a field not far from the current location of the speedway..

28 April 1990:
In cooperation with the Danish Grass- and Sand track Association the club  organized  a Danish-Nordic qualification, and  a semifinal in the European grass track sidecar Championship. At that occasion the grass track got approved by the International Union FIM.
The event was sporting a success, but due to misunderstandings in the press about the date, the meeting was moved a day ahead, so the audience was almost disastrously small, only 350 came through the turnstiles.
Others came in vain to the track the following day. An economic loss for the organizers was inevitable.

Speedway was not unknown thereabout. In 1967 there was a pratice track at Nollund which at least on June 10th was used for a double header meeting in the Danish tournament, where the results were that Uldjyderne from Herning won 28 -23 over the Lions from Haderslev, and that the same Lions defeated the Charcoalers from Hillerod 27 – 20
The track was very short-lived and occurs only in MotorBladet’s reports that one year.
Which club organized  the meting is not known.

Grindsted Speedway Club  saw the need for a real speedway track and began to build one on the current location. However, it was extremely difficult to obtain the necessary permits to start using it, but in 1990 they managed to get through the needleeye.
This webmaster should judge the first match on the track, and I had previously received a long list of conditions that DMU’s track inspectors had reservations about approving. It turned out happily on the day, that the club had brought it all in best order.

Some curiosities related to the new track. Among these were the referee’s box, which was a small wooden house with a past as a ticket office for a small ferry line at Horsens Fjord. The sliding door window still existed, as did the painted list of fares for crossing on the window . It has since been improved significantly. Also the pit has been extended and rebuilt and is now a roofed brick building with plenty of space.

A special chapter was the clubhouse and cafeteria, which was located in a discarded green painted English double-decker bus, which stood just off the track’s first corner. On the lower deck beverages,sweets and sausages were sold, and from the seats on the upper deck spectators could enjoy the purchased and the view of the track.
It is now replaced by a spacious wooden building. 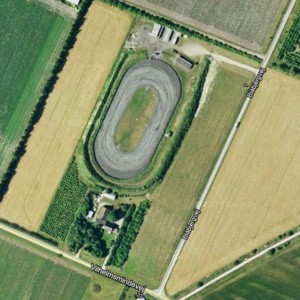 In 1991 Grindsted speedway club entered the speedway 80 cc Danish team tournament’s talent group, an In 1993 the club had a 500 cc team in the Danish tournament’s second division, and it ended honorably in a fifth space. 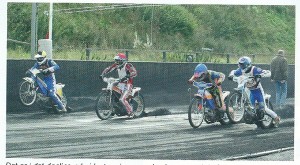 GSK entered into the limelight and into the Danish Speedway League 2007 with the team “Roots and Wings”. The symbolism of the name was that the team had its roots firmly in the Jutland soil, but the wings were wearing the team’s riders out to international business.
The Norwegian Grand Prix rider Rune Holta and Finnish Kaj Laukkanen were top riders in a 11 man squad.
The ambitions were probably larger than the results, but anyway the club managed to hold on in Danish Speedway’s top division in 2008 0g 2009, but then had to step back into the first Division in the 2010 season.

GSK was back in the league in 2011 and ended up in last place, which actually should have meant relegation again, but as there was no other team in the first division that desired promotion, remained the club as league club. Henning Baker, who was league team captain for the first three years, was back again at this post, and the new top name was SGP rider Kenneth Bjerre.

2012 was an “up and down” year for Grindsted. During periods the team rode even with the best, but also spent time in last place, before at the very end they left this sad place to Outrup. But as there were only seven teams in this year’s league, there was no relegation.

In return, the club might be pleased to see great talent Michael Jepsen Jensen unfold. Already as micro rider he won a Danish championship. In his 80 cc. career, both the European and World Championships, and a very promising 500 cc. career has so far given a  World Team Championship and a grand prix victory and 24 GP points achieved on a wild card, before he finalized 2012 with the title U21 World Champion 2012. Since then he is captaining Grindsted’s league squad 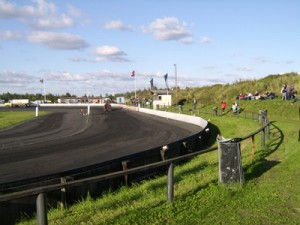 A view over Grindsted speedway, the ref’s box to the right.
In the background the club house and to left the pits. 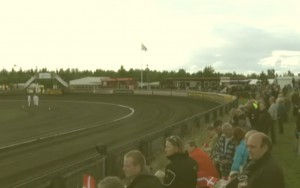