The military airfield got established in 1916 during WW1. It was situated due west of and close to the Westwall which is a part of the ancient fortification of Copenhagen.
Some of the buildings (now under preservation) still can be seen from the old main road to Køge near the Baltic coast. But most of the plant has been buried under the motorway to Amager.
The airfield was used by the Danish marine’s flying corps as base for their land based aeroplanes, but they had been moved to another place, and a part of the area was used as a military training field.

The dirt track rider Morian Hansen who also ran a flying school achieved I 1936 – 37 permission to use the airfield as base for his school.
As Roskilde Road’s dirt track and The Hunters Rest dirt track both were closed Morian lacked a track for practicing, and in 1937 he got permission to build a cinders surfaced dirt track far most away from the buildings.
Through the following couple of years some good races were ridden there attended by at great crowd of fans.
Unfortunately not much has been filed about the results and who rode there.

During WW2 the German Luftwaffe in 1940 occupied the airfield and used the buildings as repair shops for aeroplane engines.

The Avedore dirt track survived the war and was in 1946 – 47 used as practicing track by among others Sv. A. Engstrom prior to his post war come back. This information may be regarded unconfirmed, as in fact Engstrom raced in Bogense already in 1946.

A photo is from a sidecar race there in 1946. The leading
Triumph is ridden by Egon Walther,and behind him
is Svend Jensen riding the BMW with no. 42.

The Sports Motor club Copenhagen organized a dirt track meeting on the airfield with appr. 10.000 spectators.
Albeit a vast number og rookies was listed, no crash occurred, The only dramatic incident was a sidecar pilot who lost his “sandbag” in a bend. The ambulance entered the track, but left it again, when it became clear, that the man escaped unhurt from his flight.
Some issues before the meeting lead to, that the three expert riders from Copenhagen Svend Aa. Engstrom, Orla Knudsen and Aage Andersen declined to participate.
Results:
Rookies:
1. V. Mikkelsen, 2,05,5 min.
2. Uffe Petersen, 2,06,9
3. Axel D. Nielsen, 2,08,9 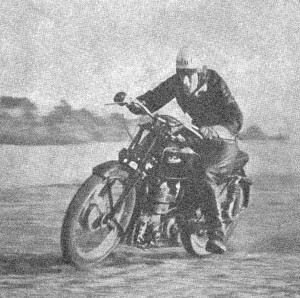 If you posses any informations, stories, pictures or material regarding this track,
you kindly would make available for this website, Please do so by proceeding
to the contact page or by using the e-mail address: sk@speedwaylife.com
Thank you very much in advance.