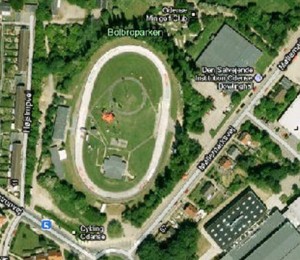 Satellite view of the velodrome in Odense west.

The velodrome in Odense is located in Odense West in a greater sporting area which also holds a football stadium, a large gym, an athletic stadium, skating rinks, a bowling hall and a cricket ground. The velodrome is characterized not only by its concrete surface, but also for moderate banking on the slightly curved straights and the very high banking in the bends, allowing the very high speed a bicycle racer can achieve in pace after a motor cycle.

Sound of motors is not unfamiliar in the history of the velodrome. Many bicycle races have been ridden there with motor pace, mostly behind the special DERNY bikes, either with one pacer to lead the peloton or each rider behind his personal pacer.

July 7.1951
Fyens Motor Sport got permission to organize a meeting for motor cycles on the velodrome. Test rides have proved that considerable speed could be achieved, but also that powerful bikes could be difficult to handle because they tended to pull upwards in the curves and head for the surrounding wooden fence. For safety reasons the size of cylinder volume got limited to 200 cc, which proved to be fast enough for good racing.

The agenda for the day held two track record attempts, a match between the cities Odense and Aarhus in four heats over six laps, The Odense Cup race in three heats likewise over 6 laps, two qualifying heats in pursuit chase with a final. The “Match of the day” over four laps between the two fastest riders, and finally a challenge match with the fastest rider from Aarhus and Odense respectively.

Unfortunately the programme below (which belonged to the DMU delegate and made available by his son) is not filled in. All we know is that the rider Jorgen Paaske was the most successful rider of the meeting on his 197 cc. JAMES bike. 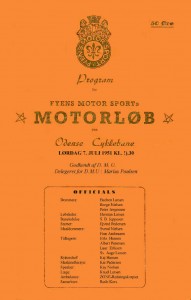 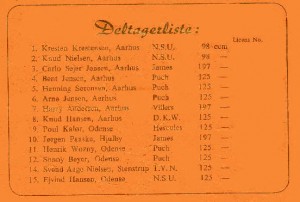 Some may argue that motor racing on concrete and high banking was not speedway as we like it. But alle riders in the list were well known speedway riders from those days, and apparently they all liked it.