The Loevel track hosted through many years the “Store Bededags Race” (see note below), a prestigious race that attracted many international top riders as well as the best of the Danish speedway stars.Further a number of matches in the Danish team tournament series were ridden there. For a period of time in the eighties the track also hosted the Sports Motor club Odin from Odense which after the closing of the Fangel track had become “homeless”

Note: Originally the “Store Bededag” was a religious day by royal decision to unite a vast number of local praying days into one Great Praying Day common for the entire kingdom. Nowadays the majority of the Danes consider it more like a “Bank Holiday”, a Friday well suited for a prolonged week end.

This airview shows the Loevel track on the opening day in 1947.

The track was (is) located in a landscape of beautiful rolling hills west of the village Løvel at the main road A13, 11 km. north of the greater city Viborg. (See map)The access from the A13 as well as the spectator’s over viewing the track from the terraces were ideal.

The map shows the fine access to and parking facilities at the track.
The narrow pathway north of the track is Kirkedalen – (the Church Valley) 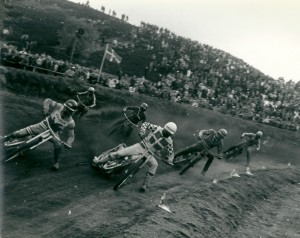 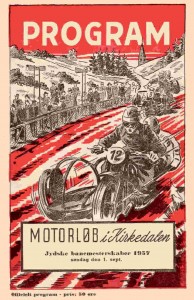 May 18. 1973: International Expert meeting.
Ole Olsen’s meeting with Ivan Mauger and Barry Briggs attracted 10.000 fans to Loevel Speedway, where also some fine national heats in other classes got absolved plus some automobile heats.

May 10. Maj 1974 International Expert meeting & national classes.
8000 spectators felt more and more disappointed as the day progressed. First and most because Ivan Mauger, who was in the programme, did not show up. Secondly because the Austrian Hubert Fischbacher did not either.

Thus the original 6 man expert class crimped to 4, of which the Dutch rider Ab de Groot was no match for Ole Olsen, Anders Michanek from Sweden and Egon Müller from Germany. Although these 3 gave each other a good fight, it was engine failures deciding the result in favor of Michanek.

In Junior special 500 cc class both Steen Rasmussen from North Zealand and Mogens Hermansen from Haderslev retired after crashes, both with collar bone fractures. So also this class got reduced to 4 riders.
Still the Jinx worked overtime. In the third heat of the sidecar class the pair Jens Pedersen/Kjeld Ostergaard hit the earth wall, and Jens Pedersen got taken to hospital to be checked for a possible leg fracture, which to all luck it was not.

April 25.  1975. International Expert meeting & national classes.
10.000 fans witnessed emerging troubles, which the referee in charge Preben Woer had no means to solve, neither by the rule book nor by common sense. Arguments were useless. The reason was, that Egon Müller came with a long track bike, while the other riders in the international expert class came with speedway bikes, as they used to. Actually Müller had a speedway bike in his van, but he insisted to ride on the long track bike.He argued, that Loevel in the international calender was listed as a sand track, which in German vocabulary means a long track, although it with a length of 420 meter came just under the upper length limit for a speedway. The supplementary regulations for the meeting said nothing about bikes, because it was regarded obvious, that the track was a speedway.
Müller rode his LT bike and came second after Ole Olesen in his first heat and won the next. In the third heat out of five the riders showed their own way of solving the problem. Müller outside felt so much squeezed against the earth wall, that he stopped, packed his gear and left the track in anger.

In Front: Ivan Mauger with Ole Olsen inside, behind them
Kristian Praestbro, Bent Norregaard and Peter Collins

May 15. 1992 The last “Store Bededag” meeting:
It was an event with more drama than wanted. Jan O. Pedersen had already won his first two outings, but third time was one of misfortune.The Danish rider Peter Ravn skidded out too much in bend 3 on the over watered track in front of the reigning World Champion who tried to lay his bike down to avoid hitting Ravn.
Unfortunately Jan O. hit the grass covered wall, and split seconds later he got hit in the back by his own bike with severe spinal injuries following.
In a later heat once again things went wrong for Peter Ravn. He collided with the Norwegian rider Lars Gunnestad, and both riders fell. Then they got hit from behind by Hans Nielsen who after a great tumble landed on his left shoulder and broke a collar bone.
Lars Gunnestad needed a search for a broken leg, which luckily showed not to be. More ambulances brought the injured riders to hospital in Viborg, and the prize list lost more of the obvious favorites.

For Jan O. Pedersen the crash brought a premature end to a very promising career, which with the winning of the World Speedway Championship in 1991 had only just begun.

The scheduled Store Bededag’s race for 1993 got cancelled and has never since been scheduled.

In a period mid 80-es the track was a remote home for Sports Motorklubben Odin from Odense, who was homeless after closing of the Fangel track.

Air view 2008: The track is still existing but no longer used for motor cycle speedway.
In mid- 90es it has been extended with a loop in the eastern end and is now being
used for car racing under the authority of DASU. (Danish Automobile Sports Union)