It lasted until 1980 before a motorcycle meeting could be organized on this track, when the Trotting Society invited Ole Olsen and his companion Aage Sondergaard’s company Speed Sport in Vojens to arrange a meeting in cooperation with the motor union of Zealand. 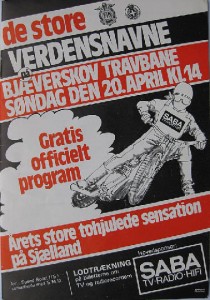 Programme cover from the opening meeting .

Thus a lineup of 18 international top riders plus two substitutes from 7 nations headed by the current World Champion Alois Wisböck and former Champion Ole Olsen gathered at the track on April 20 1980. Further there was a junior class.

Headlines from the race report in Motor Bladet

On the very day everything was chillingly close to go wrong. Heavy storm and rain did every ting to bother the organizers. The ferry Dana Regina lay the entire Sunday in the North Sea with the British rider’s bike onboard, while their owner stood in Bjaeverskov, where they needed to find bikes to borrow. They succeeded but some found it difficult to adapt themselves to other bikes than their own. Best off was Peter Collins when the tuner Hans Zierk offered him a Roth engine. 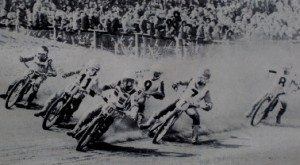 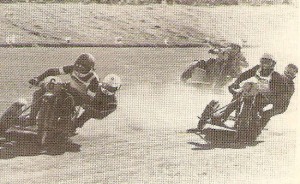 The next meeting was the Nordic Long track Team & Individual Championship on April 18 1982 together with a sidecar class. This time the rain stayed away, but as usual a strong westerly wind blew over the track and 6000 spectators.
The winning Danish team captained by Ole Olsen included Svend A. Schmidt, Lars B. Hansen, Finn Rune Jensen and Skjold Larsen.
Individually Ole Olsen claimed the title ahead of Anders Michanek, Sweden and Veijo Toureniemi, Finland. 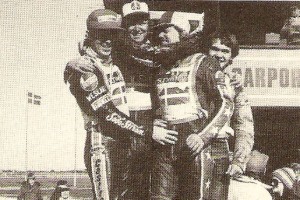 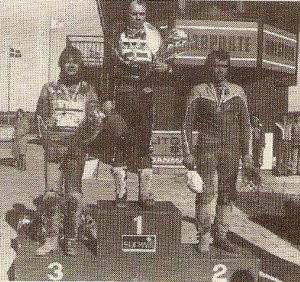 Sidecars:
1. Jan Rasmussen/Per West.
2. Steen Christensen/Villy Hansen,
3. Kaj Schmidt/Anders Knudsen who had to run ¼ lap to the finish line with their vehicle after an engine failure.

The sidecar team Gert Nielsen/Poul Rasmussen suffered a severe crash in the morning practice when their vehicle hit the curb in a bend and catapulted to the sky. Both men fell off and escaped with a knee wound and a concussion, while the bike returned to mother earth as a heap of scrap metal. 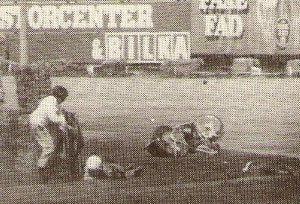 The practice session got organized by the Amager Motorcycle Club on Saturday and Sunday. The session got finalized with a regular race Sunday afternoon, which Norway utilized til select their riders for further qualification to the World Long tack Championship.

If you posses any information, stories, pictures or other material regarding this track,
you kindly would make available for this website, Please do so by proceeding t
o the contact page or by using the e-mail adress: sk@speedwaylife.com
Thank you very much in advance.