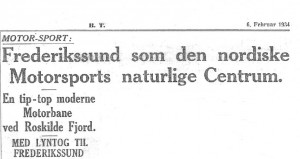 These were the punchlines in the Copenhagen newspaper BT on February 6 1934.
In translation: Frederikssund as the natural centre of Nordic motor sport.
A state of the art motor speedway on the banks of Roskilde Fjord.
With high speed train to Frederikssund from Copenhagen 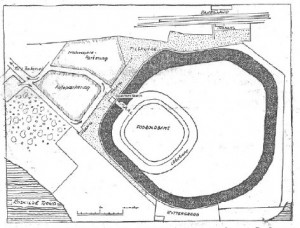 This drawing was depicted in the article. The dark contour is the nearly hexagonal outline of track with its wide open bends. In the infield there af facilities for athletics e. g. a football pitch surrounded by a cinders track. In top of the picture there is a railway station where the stadium has its separate platform directly at the entrance. From Copenhagen Central the travel directly to Frederikssund Stadium lasted a mere 50 minutes. The pit area is marked in the bottom of the drawing.

Another drawing – kindly made available to us by the local historic archive of Frederikssund – shows the western part of Frederikssund, the Roskilde Fjord and partially the banks of the Hornsherred peninsula on the other side. To the right Crown Prince Frederik’s (Frederik IX) road bridge over the fjord. Left: The railway bridge. The railway and the bridge are no longer there, only the curved dam on the opposite side is left.

The location of the motor stadium is marked in red.

In 1933 a project regarding the building of a motor stadium at Frederikssund was brought forward. The principality of the town supported it and took options. The construction work could be a means to reduce the great redundancy, which haunted the town through the thirties.
On August 23 1933 the company “Frederikssund Stadium Ltd” got founded. The initiative was taken by Frederikssund Motor club spearheaded by Richard Erlandsen, Erland Nielsen and Eigil Nielsen. Further two land owners, Theisen-Krestensen and C. F. Lassen joined the company and made an area of ca. 176.000 m2 available for the project.

Sunday August 26 1934 was inauguration day for the stadium and the odd shaped speedway. The track could be used for motorcycling as well as car racing and as it was seen in 1935 also for horse racing. 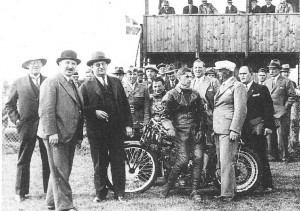 On the picture from left; Editor Mr. Theisen-Krestensen, Solicitor Richard Knudsen and the mayor of Frederikssund Emil Retoft. The rider leaning to his bike is Svend Aage Engstrom. In the background the elevated “open air” referee’s box.

Frederiksborg Amts Avis (The local newspaper) wrote on August 21st in an article ahead of the opening, that the track was the first phase of the entire stadium, ready for inauguration.There would be parking lots for 1000 automobiles, 1500  motorcycles and 5000 bicycles.
The riders for the opening meeting would be:
In the 350 cc class: Ivan Jensen, E. Truelsen, Svend Aage Sørensen, Erik Ohrt, Leif Hirsborg,, Carl Henriksen, Henning Pedersen, Henry Jorgensen and the Swedish brothers Aake and Rud. Jonsson.

The four newspaper clips below refer to a grass track race in 1935 when the Austrian ace Martin Schneeweiss rode on the Frederikssund track.

1935. Martin Schneeweiss ahead of Engstrom and Baltzer Hansen.

1935. Sv. Aa. Engstrom leading. The picture is giving a good
impression of how bumpy and rutted the track was.
It also shows the large width of the bends. 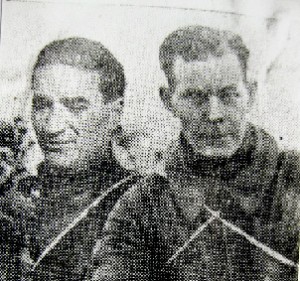 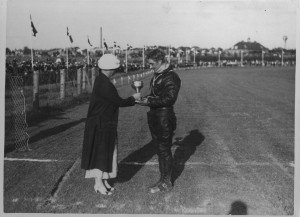 Frederiksund 1936, Engstrom being presented a trophy.

In the presence of 6000 spectators on May 2 1937 the Swedish rider Steen Ednalund won an international meeting with Svend Aa. Engstrom second 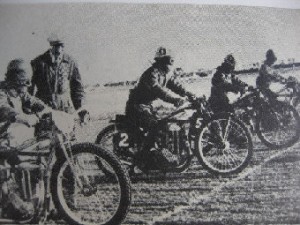 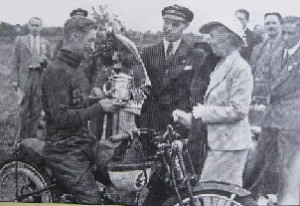 In 1938 the race for the Elektrol Cup was staged at Frederikssund, where Engstrom claimed his first share in the prestigious cup. 11 years had to pass by before he got his second share at Charlottenlund in 1949, but he never won it for good. After 3 wins in a row Arne Pander did so in 1958. (see Charlottenlund)

Also in 1938 the Nordic Championship individually and teams got staged at Frederikssund. Engstrom reclaimed his individual Championship, and together with Baltzer Hansen and Svend Aa. Sorensen the Danes also won the Nations match. The Danish sidecar pilot from Copenhagen David Axelsson won the Championship I his class.

On the Norwegian team among others rode Leif Samsing and Alf Hjort. Afterwards Samsing complained over kidney pain caused by the bumpy track.
The 18 year young Norwegian rising star Leif “Basse” Hveem had his first appearance in Denmark and won the 350 cc class ahead of Bent Jensen, Denmark, Börje Haag, Sweden and Leo Rompanen Finland.

Through its lifetime the track enjoyed great attendance from the public and many fine meetings were successfully held there. Unfortunately the same success did not apply to the economy.
In 1937 a great tax debt caused insolvency. Here as at many other tracks in Denmark in the thirties it is a fair guess that the most hated 60 % tax on the entrance fee might have been the major factor.

As can be read above, in 1938 the Elektrol Cup race as well as the Nordic Championship got ridden on the track. The report from the latter tells about a rutted and bumpy track. Most likely lack of money was the reason for improperly preparation of the track before such an important meeting.

Probably the last meeting on the motor stadium was the 50 km. grass track race, which is shown in the movie clip linked below. It illustrates the ruts and bumps that must have made this race an ordeal for the riders.

We have not found match reports later than 1939.

If you posses any information, stories, pictures or other material regarding this track,
you kindly would make available for this website, Please do so by proceeding
to the contact page or by using the e-mail adress: sk@speedwaylife.com
Thank you very much in advance.