Credit given to Mr. Henning Hansen from Kalundborg for his collection of data from all speedway meetings at Naestved Stadium,

Naestved Motor Klub got founded in 1932 and as such one of the oldest still active motor clubs in Denmark. From 1932 to 1939 the club on behalf of the owner company ran the dirt track at Karrebaeksminde. WW2 and the German occupation of Denmark put an end to that. After the war it took a couple og years to get motor sport rolling again. In many cities speedway got ridden on the cinders surfaced running tracks at the Athletic Stadiums, which had ample length but in many places were somewhat narrow. 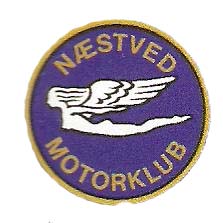 Through the years 1949 to 1955 the Naestved Stadium framed a series of excellent speedway meetings organized by Naestved Motor Klub. All the Danish stars from those days like Orla Olsen, Kiehn Berthelsen, Erhardt Fisker and the veteran “Morian” Hansen rode there together with many of the World stars from abroad and enjoyed attention from fans in numbers up to 21.000. Also Naestved’s own rider Erik Wincentz gained great popularity and achieved fine results.

Around 10.000 spectators were present, when the president of  Danish Motor Union Mr. N. K. Pedersen gave the opening speech.
19 heats for in all 20 riders in the special- and standard classes got absolved.
Most exciting was a challenge match between Kiehn Berthelsen from Ringsted and Erhardt Fisker from Copenhagen.
Fisker lead 3 laps, but got overtaken by Berthelsen, who immediately again had to leave the places to Fisker in the fastest winning time of the day 1,24,9 min. against Berthelsen’s 1,25,4.
Results:
Expert:
1. Erhardt Fisker, Copenhagen,            8 point.
2. Jorgen Petersen, Copenhagen,        5 point.
3. Svend Jensen, Odense,                      4 point. 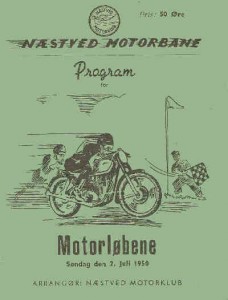 The experienced old people from Naestved knew exactly how important it would be for the junior riders ti be given the opportunity to participate in a real track race.
At first it was Gentofte speedway, who decided to organize such a meeting, but declined for economical reasons. The it was Gladsaxe speedway, but they could not get permission from the union.
Finally the meeting got organized in Naestved, but unfortunately with a very little audience, merely a couple of hundreds.
For the first time also sidecars appeared on the track.
Much drama was shown in the meeting, because many of the young riders’ guts was not  matched with their skills.
Results:
Special 500 cc.;
1. Peter Jacobsen, Copenhagen.
2. J. Crone Jorgensen, Copenhagen. 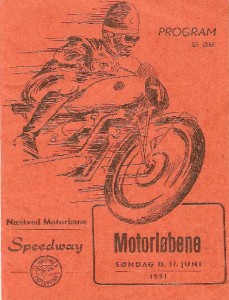 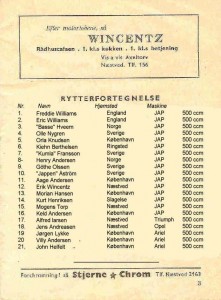 A fine list of riders in the expert class and, and a rare
thing like an Opel bike in the standard class.
A note written by pencil in the programme cover says
that no. 7 “Kumla” Fransson got replaced by
Verner Lorentsen from Norway and Göthe Olsson
got replaced by Edvin Frederiksen, also Norway.

According to advertising in a newspaper was this meeting  ” Match of the Gigants ”. 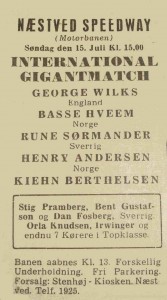 The Nordic short track Championship, as the meeting was called, was attended by riders from Denmark, Norway and Finland. Sweden did not participate.
The championship took the form of a Norwegian tour de force against Denmark, while the Finnish riders got referred to secondary roles.
The race format was rather complicated. After four initial 4 heats from which the winners went straight to the finals,  the rest went to qualifying  heats before the finals, consisting af 3 legs of 2 heats.

The season was coming to an end, and the weather had been chilly. Hence “only” 9000 spectators watched the wolves from Norrköping defeat a mixed Danish select with 56 – 52.
Although haunted by a couple of engine failures Kiehn Berthelsen was Danish top scorer with 14 points of which 2 was bagged while replacing an ill Erik Wincentz.
A standard class was won with 7 point by Johannes Mygind ahead of Robert Rasmussen also 7 point and Alfred Larsen with 3 points. Unfortunately Norton Hansen got his bike wrecked in his first heat and retired from the meeting.
A challenge match between Orla Knudsen and Stig Pramberg got  won by Knudsen.

The World Champion Jack Young should have been there but excused himself for some dubious reason. In his place came Split Waterman, who did not cheat his fans, but took a clean sweep in all his heats. 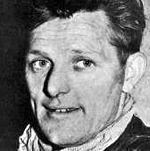 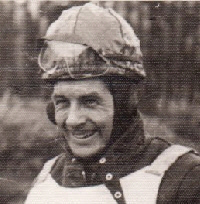 In the 500 cc special class Leif Hirsborg from Copenhagen had a nasty crash and got run over by the rider behind. Luckily both escaped unhurt

The last meeting in the season.

The Season opening meeting got attended by 8000  spectators, who saw the local hero Erik Wincentz get a break through on the great speedway scene.

Albeit a dazzling performance of Erik Wincentz, who bagged 16 points, the Naestved team anyhow saw themselves defeated with 39 point against Gladsaxe’s 44 point.
There were two groups in Senior standard. The first group was won by Norton Hansen from Holbaek ahead of the Silkeborg riders Ernst Osterlund and Jens Nielsen.
In the second group won Ejvind Hansen from Ejlstrup after a hard fight with Christian Schmidt from Holbaek.
Unfortunately a sidecar match faded somewhat out, when the favorite Egon Walther from Copenhagen got his motor ruined in his first heat and withdrew. Then Hans Th. Jacobsen won with 6 point ahead of Niels Andersen with 4 point.
The match of the day between the four fastest rider was won by Orla Knudsen ahead of Erik Wincentz, Bue Jensen and Kaj Larsen.
The day finished with a challenge match between Norton Hansen and Ejvind Hansen. Under the audience’s applause they roared  four laps  shoulder by shoulder with Ejvind Hansen outside.
It got judged “dead race”.

The great issue among the audience after the race was  Erik Wincentz, who got his long  time awaited international break through in a victory in the “match  of the day”, where he replaced a withdrawn Edvin Frederiksen from Norway hvor han indsat , defeated Bill Kitchen, Kiehn Berthelsen and Leif Bech.  He took the lead right from the gate, and under applause from 8000 spectators he finished 3/10 of a second ahead of Kitchen.
A team  match between Naestved and Funen got won by Naestved 42 – 39.  Erik Wincentz scored 15 point.

June 27. June 1954. Team match  England – Sweden –  Denmark:
According to the organizers a weather forecast predicting heavy rain over most of Zealand was the main reason for the attention of “not more” than 10.000 spectators to a meeting which numbered a great part og the world’s finest speedway riders. 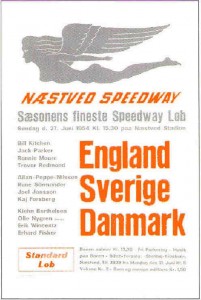 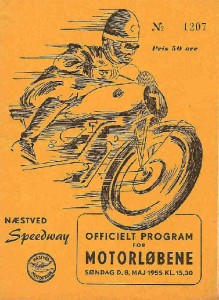 The distribution of the missing points is unknown to us. Can anyone help?

Usually in it’s active period the track staged 4 – 5 meetings per year, but gradually the public interest diminished.
I 1955 the for the time last meeting at Naestved Stadium got absolved. Then the club concentrated around moto cross.
However speedway returned to Naestved Stadium for a short but happy visit. Together with Lions Club Naestved Motor Klub organized the ultimate meeting on the stadium on Thursday July 1st. 1982. .

July 1.  1982  International meeting:
Ole Olsen helped to contract a number of international stars to give the crowd of 7000 super speedway for their money. 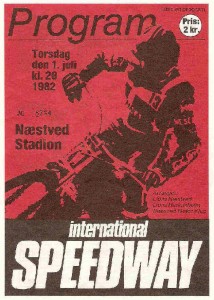 Ole Olsen himself opened the fun with a track record attempt which lowered Rune Sörmander’s record on 75, 4 second in 1955 to 71,1 seconds.

The thrill skyrocketed when after heat 20 4 riders tied on 13 point, and a race-off was needed.

Olsens track record is now and forever history, because the cinders track no longer exists, and King Football is now sovereign of the stadium.