There was more than one trophy named the “Elektrol” trophy. The very first competitions were ran as combined orienteering- and precision rallies on Scandinavian country roads.

As we on this site have chosen to concentrate on meetings on Speedway / Long track  we will deal with a series of meetings ran in the years fro m 1936 to 1958.

The “Elektrol” Trophy was a prestigious silver cup, donated by Alfred Olsen & co. in Copenhagen on behalf of the oil company Elektrol Oil Ltd. (Gulf Oil). A rider should win it  three times to get  it as property.
Every years winner got a silver replica.

The first two meetings was staged on Amager Trotting Track, and both was won by the Swedish star rider Thorsten Sjöberg.

Amager Trotting Track was not available for the meeting in 1938, and therefore the meeting got transferredr to the almost closed track in Frederikssund, where Sv. Aa. Engstrom secured his first share in the trophy. 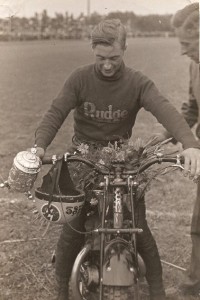 The outbreak of WW2 stopped the motor sport until 1946. After the war the Frederikssund track was closed for good.  Hence the  meetings got transferred to Charlottenlund Trotting Track

The series about the Elektrol Trophy got re-started in 1949. In the meantime Torsten Sjöberg  accidentially sadly had lost his life in a Swedish military motor race during the war.

At  the first meeting Sv. Aa. Engstrom  his second share in the trophy and inherited the dignity as favorite, which was left over from Sjöberg. But that was not to come easy.

The Swede Göte Brester was the stronger man in 1950, and in 1951 and 1952 respectively  Kiehn Berthelsen and Orla Knudsen from Denmark triumphed. Den latter after a thrilling side by side fight with Kiehn Berthelsen in all the final’s laps and half a bike’s length ahead on the finish line. 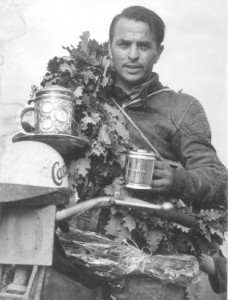 Orla Knudsen in 1952 with both the  trophy and the replica.

Göte Brester returned in 1953 and secured his second share in the trophy. Then both he and Engstrom were favourites to the final victory

The meeting was expected with great intensity, because Brester and Engstrom lined  up against each other, and thus both could secure the trophy for property. But it did happened otherwise.
Göte Brester had to retire, when a valve in the engine broke. Engstrom suffered more technical problems and reached only the intermediate heat.
Danish Irving Irvinger was the fastest man on the track and the day. but in the final heat he got ignition failure, and the tiny Leif Bech pipped  him on the line and won.

Despite he earlier sad he would stop, Engstrom lined op again, ans so did Göte Brester to defend the possibility to win the trophy. Engstrom retired  early with engine failure, while Brester reached the 3. place in the final.
Kiehn Berthelsen, who few days earlier returned from a great meeting in Amsterdam and had spent the latest nights preparing his bike, got despite lack of sleep rewarded by winning the final ahead of the Swede Göran Norlén and beating Irvinger’s track record from 1954.

Kiehn Berthelsen was great favorite. Partly because he was riding a brand new ESO bike, which prove to be the meeting’s fastest, partly because he with the victory the year before already had two shares in the trophy.
But a curse was sticking to the Elektrol Trophy. Obvious favorites never won, And the curse remained unbroken.
Berthelsen gated best and came swiftly through the first bend when the engine backfired. It didn’t stop, but a few seconds manipulation with the throttle before it ran again was enough for both Arne Pander, Jeppe Ussing, Kaj Larsen and Svend Nissen to pass him.
Arne Pander’s victory must be seen in the light of, that he rode on his ordinary speedway bike against the other’s  special long track bikes.

Some spectators expressed their dismay over Arne Pander’s gating in the final. many thought he jump started, but no re-start was judged.
The gating however was not decisive, as he got passed by more competitors before he was through the first bend.
Then he started to catch them one by one, and some og them suffered engine failure in the hard chasing.
At the finish line there was no doubt about Pander’s victory.
Then one could feel it unfair to win on other’s misfortune, but to finish first you have first to finish.

The sympathetic Swedish rider Göte Brester was obviously indefatigable in his attempt  to win the highly wanted trophy to property.
This time it was not the feared engine failures that hindered his success. His material functioned perfectly.
But the invincible obstacle was named Arne Pander.
Both riders gated simultaneously, and Pander came approximately 20 m. ahead, when his rear tyre on the second lap  began to lose air.
Pander kept a narrow lead to the finish line, but shortly after, the  bike stood on the rim.

The curse was still there, but it gor broken by Arne Pander.

The Elektrol Trophy was handed over to property by Gulf Oil’s managing director Mr. Christie.
Mrs. Pander gave her husband a  delicate victory kiss in his oil smeared, sweaty and dusty face, and joined him sitting on the rear mudguard on his lap of honor.

This was the end of the Elektrol Trophy’s era, which with more than 30.000 spectators every year had been a tremendous success. 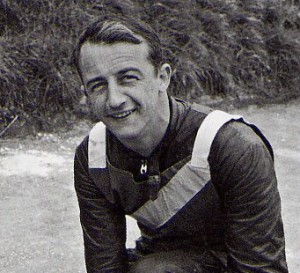