The speedway at Kalundborg was built and run by “Nordvestsjællands Motorklub”, which got founded on October 15. 1946.
In 1947 the Club discussed the building of the largest speedway on Zealand. The dimensions of the track were planned to a length of 650 m. and a width of 15 m. all way round, suitable for cars and motor cycles.
But this project got discarded because some high voltage leads needed re-routing to give way for the track, and the power plant would require the club to lift the expenses.

The Aarby Speedway was located between Melby and Aarby. (The black oval)

Then in 1948 the members of the club began working on another project, building a track north of the road between the small townships Aarby and Melby due south of Kalundborg (see map). The area was made available by Mr. Thorkild Jensen, owner of the Aarby Mill Farm. The cost estimate was 15.000 DKK, and the terraces should accommodate approx. 20.000 spectators.

Air view of the track with Kalundborg town in the background.

The track stood ready in early May 1948 and 6 events were planned. The – as elsewhere mentioned – motor racing ban from the Secretary of Trade came up, and only the opening meeting on May 30 got held. After the meeting the riders unanimously declared that the track was very good.

The entrance to the track 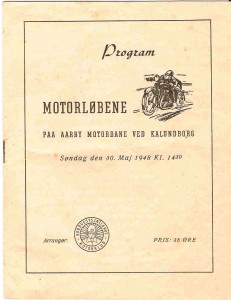 The programme cover from the opening meeting. 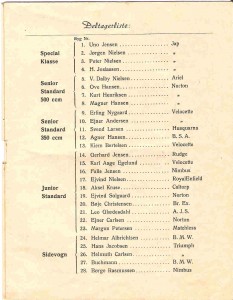 The entry list at the opening. Note in the Junior class no. 16
Falle Jensen with a four cylinder 750 cc Nimbus among the lot
of single cylinder 350 cc and 500 cc British bikes.

The pit area at Aarby.

In order to get some income from the track during the ban, the owners considered horse racing, but met serious objections against the plan. The General Secretary of the Trotting society downright declared that any breeder who let his horses race at Aarby would be banned from the tracks I Copenhagen.
He listed a long row of technical and organizatoric facilities that should be settled before the Trotting society would join in. Therefore the idea got abandoned

The next year five events were scheduled, but only four actually got held. May 1, June 12, July 3 and September 4. Of those the first was solely for Midget cars, and in September three of these were in the programme again. 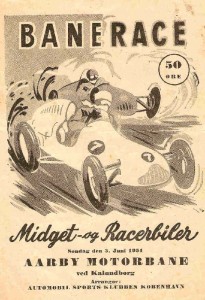 Programme cover from a car meeting at Aarby,
organized by the Automobile Sports Club of Copenhagen.

Sidecar pilot Josef Koch from Copenhagen rode his Nimbus to victory on May 1. 1949

In 1950 only 3 meetings were scheduled.
On May 7 Orla Knudsen succeeded in conquering the track record from Kiehn Berthelsen. He improved on August 28 to 1,33,4, a time which stood until May 14 1951, when Kiehn Berthelsen with the time 1,31,1 regained the dignity as track record holder until the track closed.

Although the entire Danish elite headed by Orla Knudsen, Kiehn Berthelsen and Morian Hansen together with a number of star riders from Norway and Sweden were frequently visitors, you can hardly get around the Aarby track without naming the motorcycle dealer from Holbæk, “Norton” Hansen as the most popular rider there.

The last great meeting at Aarby was held on Saturday September 1 1951 with participation from no less than 54 riders in the classes Special, Standard and two sidecar classes.
A number of moped riders also competed on Diesella, BFC, Bantam and Head mopeds. The trophy In the 500 cc Special class was sponsored by “Motorbogen” (An annual magazine with short biographies of known and unknown riders of the year)

On September 16 the same year a motor rodeo organized by Circus Daris took place on the track. It ended in a scandal. Some of the obstacles collapsed, and several stunts failed. The raging fans rushed to the exits and demanded their money back. Finally the police arrived and secured the cash box.

This ad in a Kalundborg newspaper spelled the sad end
for the Aarby Speedway in September 1951.

After that happening the Aarby speedway, which in its short lifetime displayed excellent motor sport but like many other tracks also suffered from a weak economy, closed.
Sadly it didn’t get a nicer final. It absolutely deserved it.