September 7. 1952, Opening meeting:
In front of 4000 spectators a new speedway  opened in Kolding at Tved road, located neighbor to the Agricultural Fair ground. In the opening programme classes 500 cc special, 500 cc standard, 350 cc sport and sidecars were listed.
In a contemporary report it can be read, that the track had a length of 340 metres and the race distance was 5 laps per heat. That was very unusual as on most tracks – also the former tracks in Kolding – the riders rode only 4 laps.
The same report tells that the rider Lindegaard Petersen in the special class crashed when his bike fell in two parts due to a broken weld. A sidecar passenger fell off and got run over by the following machine, but escaped unhurt.
A crashed special rider got hospitalized with a concussion. 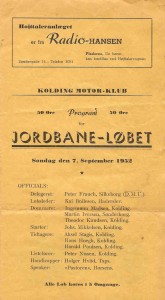 A peculiar race format called Australian pursuit chase was very popular then. A number of riders were evenly distributed around the track at the start. A rider had to retire on the infield when he got overtaken by another rider, and so on until only the winner was left on the track. Hence the racing distance was initially unknown, but because the heavy standard bikes were used, the riders’ physical condition gave an upper limit. 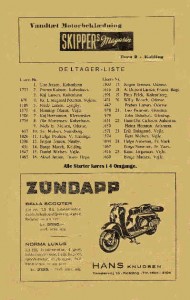 List of riders at the august 22 meeting. Unfortunately
the programme contains no results 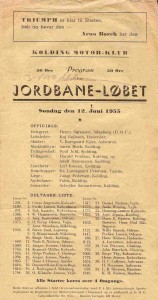 Programme cover from a meeting in 1954, kindly made available
by Kaj Hermansen, Bornholm, who himself
participated in the meeting.

Kaj tells us, that he rode in Kolding in two meetings, one with an acceptable result, and another one with a broken collarbone as result.

Nothing is listed for 1956 or later.
The reason probably lies in an old case from 1947. Back then rider Hans J. Skov crashed at a meeting in Kolding, and due to a double femur fracture declared 60 % disabled. As the motor club had not taken out the statutory accident insurance for the riders, the Directorate of Accident Insurance had to pay a compensation on 38,000 DKK. to Skov.
The Directorate appealed to the High Court against the club to get this money back, which it so long time after still was justified to. However, the club’s board members were not made personally responsible.
But the club got judged to pay the amount, which in 1955 still was a lot of money – which the club did not have.