Behind the foundation of the “Holbaek & Omegns Motor Klub” stood the motorcycle dealer Jens Peter Hansen, generally known as “Norton” Hansen”. An active rider himself since 1932, who had ridden on most of those days’ Danish tracks, a.o. Karrebaeksminde and Frederikssund, where he rode a JAP.

After long negotiations with the municipality of Holbaek the club got permission to arrange speedway meetings on the cinders covered track at the Holbaek Athletic Stadium.

All through the 5 seasons the track was open only 18 meetings got held there. The narrow tracks together with unsatisfactorily conditions for the spectators were the main reasons.
Another reason was a long list of demands for improvement of the safety which would be very difficult and too costly to fulfill. Furthermore the public interest for the meetings had diminished.
The riders too were not happy with the track, which they criticized for being very narrow, bumpy and hard.

Many foreign riders visited the track. In particular Wembley captain Bill Kitchen very often rode in Denmark in that period, besides Holbaek also on Aarby, Gladsaxe, Amager and Gentofte tracks.

A special kind of popularity among the youngsters on the terraces was achieved by Morian Hansen, who got hailed with hurrahs no matter if he won a heat or – what occasionally happened – came puffing as last man over the finish line.

The programme cover from the opening meeting 1950. T
hrough the years only few changes were made to the layout.
E.g. red colors and Speedway instead of Motorbane.

On the opening day Orla Knudsen from Copenhagen rode a track record over four laps with flying start in 1,18,4 minute. He said afterwards that he considered the track to be one of the fastest in Denmark.
In the “Holbaek race” which was to be decided by fastest winning time Orla Knudsen won the first heat in 1,20,8, and the final heat in 1,23,0 ahead of Irving Irvinger, Uno Jensen and Erhard Fisker.
Furthermore he also won Expertmatch A with 9 points ahead of Uno Jensen 5 points, Irvinger 3 points and Kiehn Berthelsen 1 point.
Erhard Fisker won Expertmatch B with 7 points, Leif Bech 6 points, Jorgen Petersen 5 points and Aage Andersen 2 points.
A race for standard bikes saw Leif Hirsborg as winner with 9 points ahead of John Helfelt 5 points and Agner Hansen 4 points.

The winner of the Standard class Robert Rasmussen passing
Alfred Larsen outside at Holbaek Stadium.

A number of crashes happened that day.

The entire 1951 season was not at all a lucky one for Norton Hansen who tasted the cinders no less than 5 times.
In an attempt to overtake Aage Iversen and Robert Rasmussen in the narrow bend he hit the fence so hard, that his bike bent one of the heavy iron poles supporting the safety fence. The bike got wrecked, Hansen himself escaped from a flight over the fence with minor bruises, but the crash made him consider to stop his career and devote his time to his family and his motorcycle shop.
Oliver Hart went down too. He slided 4 – 5 meters on his back with his bike on top, but managed to get up and finished 12, 1 second after the heat winner.
A couple of engine failures occurred. Dan Forsberg and Lennart Aaström both got a blown engine. Bits from Forsberg’s blown engine penetrated his gas tank. Really a dramatic day to be remembered.

September 30. 1951
At the last meeting in 1951 the British rider Split Waterman lowered the track record with flying start to 1,15,0.
He too got a feeling of the narrow track when he had a painful contact with the safety fence.

4. Maj 1952
Norton Hansen, who the year before considered stopping his career, was in the starting list, but rode anonymously and ended without points. Split Watermark made a new attack on the track record but failed by 2 seconds.

June 15.1952
The British rider Wally Green, who rode first time on the track,  characterized it as deadly dangerous with its narrow bends that left no space for four riders abreast.
But that did not keep the good Mr. Green away from beating both the Norwegian Basse Hveem and the Dane Kiehn Berthelsen, in his own words, only because he was a very fast gater.
Wally Green came in on short notice as substitute for Tommy Price, who was in the programme, but got hindered.
And what a good substitute he was.
Basse Hveem made a successful attack on the track record in the fine time 1,13,5.
Leif Bech won a crack race ahead of Reidar Kristoffersen, Norway and Kiehn Berthelsen.

July 19. 1952, Junior meeting:
This was one of the very few occasions for Junior riders to make themselves known to the public. The showed excellent riding, but not for a greater crowd of fans. Oluf Elsberg won ahead of Robert Kastebo and Ole K. Hansen.
All three got a chance to ride in the international meeting on August 10..

August 10. 1952. International Expert meeting:
British and Swedish star riders came to meet to meet the Danish stars, spearheaded by Kiehn Berthelsen.
Irving Irvinger should have come, but after some disagreements between him and the Danish Motor Union, the latter had banned him for a period of time. In his place Orla Knudsen got called in.
8000 fans attended the meeting.

September 28.1952
The final meeting in 1952 included a very interesting Expert match to which the club signed the two old English stars Jack Parker and Bill Kitchen to meet the young rising stars from Sweden Dan Forsberg and Olle Nygren.
Unfortunately our programme is not filled in with the result. Any help here shall be much appreciated. Dan Forsberg made an attempt on the track record, but with no success. Basse Hveem’s record kept standing.. 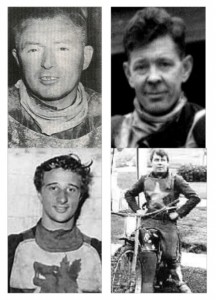 July 19. 1953
3000 spectators saw the car driver Henning Clemmensen make a test drive in a Midget car. In the first attempt the car spun around and penetrated the safety fence with the rear end.
The track was too soft, and its lack of width made it unsuitable for car racing as well as for sidecars. No further attempt was made
The day’s programme contained a team match between the cities Holbaek and Naestved. Holbaek won comfortably 48 – 25, which mainly was owed to Holbaek’s use of Irving Irvinger, Leif Hirsborg, Erhard Fisker and Aage Andersen as guest riders.
Norton Hansen had regained the “joy of racing” and won all 3 heats in the Standard class..

April 25. 1954
Only 2 meetings were scheduled in 1954. The first was on April 25 and was mostly characterized by being Bill Kitchen’s “Farewell race” after a 25 years long glorious career in which he 7 times as captain led the Wembley team to victory in the British league.

His fellow citizen Tommy Price made an attack on the track record, but failed with 1,16,1. Hence the Norwegian Basse Hveem’s track record kept standing forever.

September 19. 1954, Danish Speedway Championship final:
The main and last event in 1954 was the Danish Speedway Championship Final Sunday.
The tiny rider Leif Bech from Copenhagen took the full advantage 15 point from a series of brilliant gating.
After the race he said: ” – This could only be done at Holbaek, – here they couldn’t pass me from behind. – Had it been on the Amager track I only could have hoped for being runner up after Kiehn Berthelsen.”
Kiehn Berthelsen took the silver medal with 14 points and Erhard Fisker Bronze with 12 points.

The programme cover from the very last
meeting at Holbaek Speedway

After the closing in 1954 the club among other activities tried moto cross. 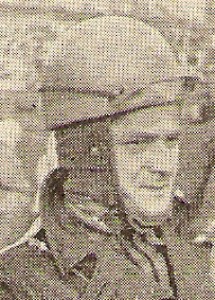 But before that the popular Norton Hansen aged 39 in the fall of 1953 sadly lost his life in a traffic accident.