The idea of establishing an international long track emerged in Randers Motor Sports club in 1946. Soon it became evident, that the task was too big for a single club. Therefore all the clubs from Northern Jutland got invited to a meeting to discuss the project. That meeting did not lead to a result.

Two men from Hobro Motor Sport, Bachmann Pedersen and Westergaard, however continued the work and bought an area at Valsgaard 3 miles north east of Hobro.

At a new meeting held on April 19 the following clubs Randers Motor Sport, Hobro Motor Sport, Djursland Motor Sport, Als Motor Sport and Northern Jutland’s Motor Sport formed a general partnership (I/S), accepted the buying of the area and decided the construction of a 1000 meters long track suitable for automobiles and motorcycles. The opening “Jydsk Motorbane I/S followed only 3 months later on the 20th of July 1947. 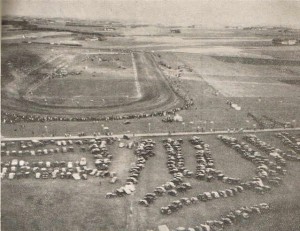 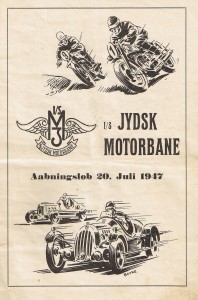 Programme cover from the opening meeting 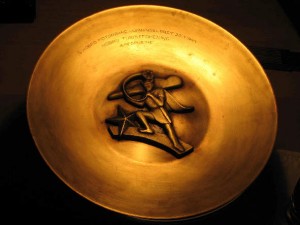 At the opening meeting this brass plate was won by the sidecar pilot
Thorkild Sorensen, and 60 years later found in an attic in Horsens

All track officials on infield duty should carry such admittance card.

“For once I really don’t know where to begin. The history of ”Jydsk Motorbane I/S” has been a difficult one to research. It is 61 years since it all began, and most people from then are gone. Pictures are lacking simply because not many were taken, nowadays we have new and highly effective digital cameras making it all much easier.

Anyway I have collected much stuff about the old track, and I find that is good.
Sometimes I nearly feel I was there from the beginning, because the history of the track is now stored in my brain cells. I have got a complete picture of the old track – in fact I have lived with the track more or less for a year. From time to time I even feel I have ridden on the track , despite I wasn’t born at the time for the opening.
Obviously you can work so much with a matter that you somehow become a part of it. One day when I sat deeply buried in the matter I was asked how it all began. For a short moment I was speechless but made a mentally rewind and came up with an answer.

I’d been back in time approximately 60 years and found, that among others Robert Nellemann from Randers had been in several races with his cars. A track that frequently popped up was the ”Jydsk Motorbane I/S” , so I needed to take a closer look on it.

I began in a smaller scale by asking here and there, browsing through old books and magazines. I searched like a mad in local historic archives and tried to find still living persons who could tell something about the old track. I heard bits and pieces and got encouraged.
In September 2007 I contacted the newspaper in Hobro, who wrote an article about me and my project. With a journalist I went to the place where the track was, and a photographer took picture of the remains of the track. Not very much was left. Most of it has with the years grown to a forest. 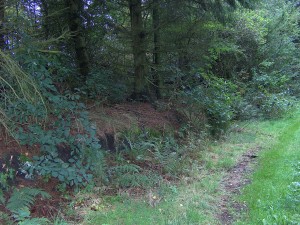 Anyway I noticed that the pathway in the forest in fact was the old straight of the track and I could recognize the remains of the old wall.
I’ll have to say that before that day, in August 2007 I had already been on the spot as the track got opened on Sunday the 20th of August 1947.
Thus it was precisely 60 years ago which had to be celebrated. Of course I had to go there exactly on the 20th of July at 1 pm sharp, and I was eager to see if possibly others would be there – maybe some people from the motor clubs who then were a part of the track. But no – I was alone out there.

From early morning I was excited and could hardly wait to drive off. I approached in my car and parked outside, possibly where the shed with the ticket counter once was. I brought the old race programme with me – the one which was sold outside the track for a neat sum of 50 ore, (= 5 P).

I followed the path – the old track straight into the forest. It was all quiet, no other person present, I had it all for myself. The sun was shining; I looked up and saw the beautiful blue sky above. The time was 1 pm and I almost stopped breathing. Imagine it all began here exactly 60 years ago, I saw everything before me: The 1000 meter track, the primitive referee’s box, the noisy loudspeakers and the flagpoles with the Danish flags waving.
I sensed the 25.000 spectators, I saw the boy selling ice cream and the girls selling programmes, I could almost feel the pits behind the referee’s box and hear the roar from Robert Nellemann’s Ford V8, the midget racers and the many motor cycles. 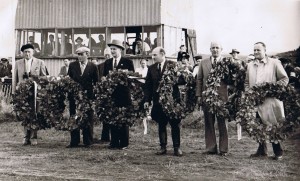 The referee’s box was a simple wooden shed
slightly elevated from the ground.

I woke up and realized that I stood in a forest all by my own and regretted that I didn’t bring a bottle of good red wine so I could have brought a toast to all enthusiast from then in 1947.
Well –  I couldn’t keep standing there forever, so I headed homewards, but before I reached home, I took the decision that the track’s history should meet daylight regardless of the costs.” 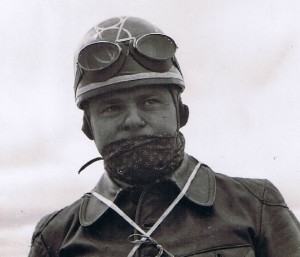 A popular person at the Hobro track (and many other places) Robert Nellemann from Randers. Motor dealer and importer. Born April 15. 1917. A universal motor sportsman having participated in all sorts of motoring; trials and track racing on motorcycles (BSA), car racing in more classes; Cooper 500 Midget, Ford V8 and Allard J2,Furthermore joining car rallies all over Europe including multiple Monte Carlo rallies. 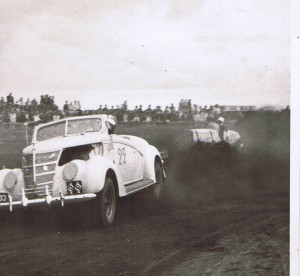 Robert Nellemanns powerful Ford V8 literally drowns his opponents
in a spray of mud and dust from the rear wheels. 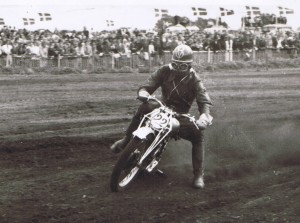 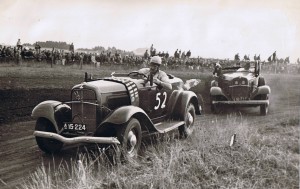 Both license plates an leather strap with plaquettes
over the bonnet belonged to the equipment.

Unfortunately the track got hit by a couple of fatal accidents. In 1949 the mechanic Hans Skovbo was testing an MG car for his driver, when the car rolled over, and he did not use the seat belt.
At a meeting on the 23. May 1954 the sidecar pilot Rasmus Kornum aged 37 lost his life in a terrible crash that in total involved 3 sidecar teams.

These accidents caused the authorities to strengthen the demands to the track’s safety precautions, which increased the stress on the weak economy. Further that caused the partners to pull out, and in 1955 Hobro Motor Sports club was left alone with the track, which in the meantime had been converted to a limited company. 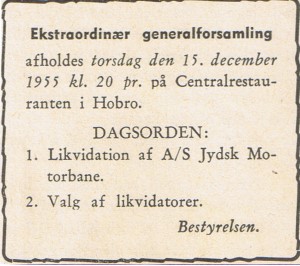 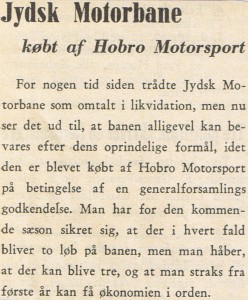 In 1957 a 500 m. speedway got established simply by halving the track with a bend crossing over the infield. Until 1960 the economy still worsened. In vain some attempts was made to keep the track alive, among others by different sorts of show events for cars. Also some horses racing were held without success. The track closed finally in 1961. 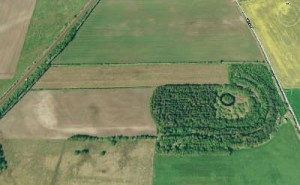 The track never got erased from the map. On a satellite view in 2008 the outlines
still can be seen. The speedway is overgrown with trees but traces of the long track are visible. 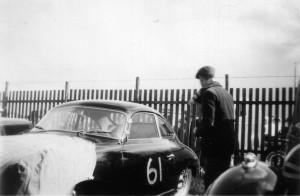 A Porsche was also to find on the Hobro track 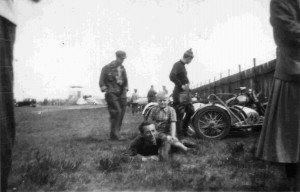 A nice break in the pits. 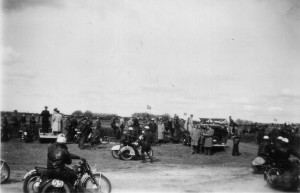 The sidecars arrive at the track. 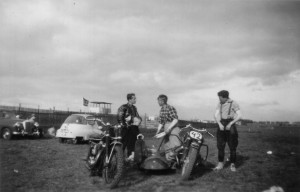 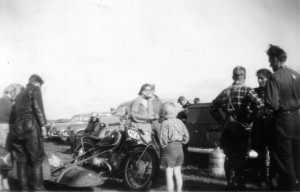 After the meeting the results are dicussed.
The boy on the picture is Hans J. Pedersen,
who now lives in Australia and
who sent us the pictures above.

May 23, 1954:
12.000 spectators gathered on the Hobro track unfortunately witnessed a horrifying accident in the sidecar class.
The reputed sidecar pilot Rasmus Kornum took the front from start, but at the entrance to bend two, his front wheel collapsed. He and his brother and passenger Herman Kornum tumbled around with the machine. While Herman tried to help his brother, both got hit from behind by two other machines.
They got rushed to hospital,
Herman with a broken leg, Rasmus with concussion, leg fracture and internal bleeding. He sadly died same evening, leaving his wife and a little daughter.
Results:
Junior 350 cc.:
!. Mogens Kjaer Hansen,      Hvidsten,           3,18,1 min.
2. Christian Christensen,      Aalborg,            3,18,2 min.
3. Bent Quist Frandsen,        Laurbjerg,         3,21,6 min.