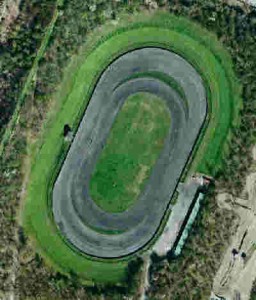 Satellite view of the speedway on Amager Common.

The old Amager Speedway in the infield of Amager Trotting track closed on June 27. 1963.
After that day all important speedway meetings in Denmark got staged outside Copenhagen, some on Selskov Speedway at Hilleroed or Fredericia Stadium, after 1975 also at Vojens. One annual Long track meeting (the Gold Bar races) got staged on Charlottenlund raceway until 1976 and in 1983 and 1984. But a real speedway stadium did not exist in Copenhagen

The City council of Copenhagen made an area available in the southern part of Amager Common near the locks of Copenhagen’s south port. In the past the area had served as a city dump. The aim was to build a motor sports center less than 6 miles away from the center of Copenhagen. The area was administrated by Copenhagen Youth Center (KUC) from 1986 to 2001 and later by the Culture- & Leisure administration of Copenhagen.

Amager Motor Cycle Club (AMCK) opened a moto cross trail there in 1977 and a speedway in 1978. Around the speedway a 10 m. high noise abating wall got erected. The inside built in terraces to provide standings for the spectators, who had a fine view all over the track.

The quality of the track surface did not match that of the old Amager track. It could be very rutted and slick too. From time to time reminders of the old dump penetrated the surface.

At the general assembly 1988 Amager Motor Cycle Club decided to change name to Amager Moto cross Club, keeping the initials AMCK, to emphasize that the club’s sole interest was – and still is – moto cross.

Running of the speedway had to find new frames. A new club named “Københavns Speedway Klub” (Copenhagen Speedway Club took over headed by the well known rider and motor cycle dealer Jens Munkedal. The team in the Danish tournament continued under the name of “København”

The attention from the public and the riders diminished. The club ran into financial troubles and closed. Between 1994 and 2001 Copenhagen Speedway does not figure neither in the lists of official results nor the meeting calendars.

A new club named ”Københavns Speedway KBH” got formed late in 1999 and took over with Micro Speedway in 2000, later with 80 cc when the club hosted the Championship of Sjaelland in 2002 and 500 cc where the club participated in 2. Division of he Danish Tournament. But it never reached the former level of activity.

A new semi-roofed pit area got inaugurated in the Easter of 2003 when the club held a well attended training School for 80 cc. and 500 cc. riders with Danish, Swedish and Polish international riders as teachers. The training school got repeated in 2004

An increasing number of riders from Copenhagen and vicinity turned towards Slangerup Speedway where conditions were better.

An increasing number of riders from Copenhagen and vicinity turned towards Slangerup Speedway where conditions were better.

Following a development plan for Amager Common from 2003 residential areas came closer and closer to the Motor Sports centre, and calculations proved that reducing the noise level by 10 to 20 dB was impossible, there was no option but in 2008 to close the area, where AMCK since 1977 has had its moto cross trail and the speedway since 1978. The latter abandoned already in 2007 and converted to a BMX piste.

That spelled the obituary of permanent speedway tracks in Copenhagen.

September 12. 1982. International sidecar best pairs:
12 pairs each put together of a senior team and a junior team. 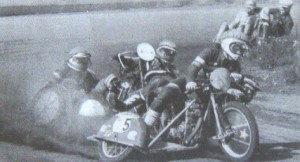 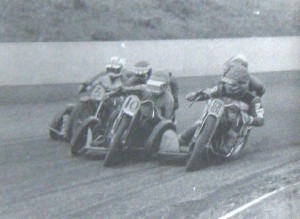 Close race. Team no. 10, Niels Munk Nielsen/ Finn Schmidt
came out the better from this fight. 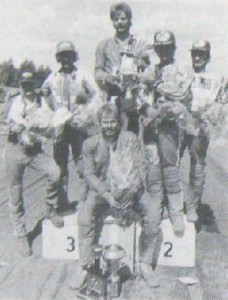 On the podium: No. 1. Jan Rasmussen and Remi Kruse,
No. 2. Oscar Lagoni and Kenneth Nyström,
No. 3: Örnulf Aasen and Erik Bentzen 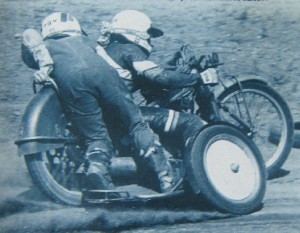 Jan Rasmussen and Remi Kruse in action on the low riding ”Banana sidecar”. 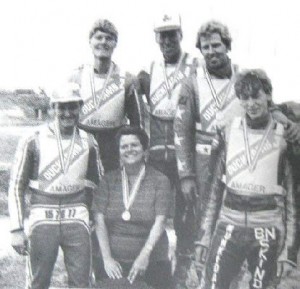 September 14. 1986. International sidecar meeting.
Cancelled due to heavy rain and not later re-staged.

1986 was a year when the silence on the track got broken only by the team’s practice meetings and home matches. The team finished second last in 1. Division.

1987
Two scheduled sidecar meetings both got cancelled by decision of the club management.

Danish top scorer was Henrik Kristensen from Esbjerg.
The day after a second match in Slangerup was won by Hungary. 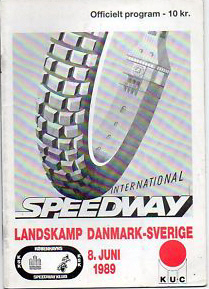 1992
The speedway team from Copenhagen did not ride in the 1992 tournament after 5 years in the 1. Division.

September 30. 1992: Promotion meeting.
After a summer with almost no activity an the speedway a promotion meeting got staged with participation from 80 cc and 500 cc speedway riders together with moto cross riders and cross carts.
It was a special experience for some to ride the heavier moto cross bikes around a speedway, but after a short practice it went OK. After the meeting a broad stream of prizes got distributed, but no prize list has ever been issued.

7 riders proceeded to the finals in Randers and Fjelsted, while Brian Andersen and Jan Andersen had to settle with the reserve berths.