Herning is the major town in an area of mid Jutland, where the main business is textile industry.
Earlier it was known for breeding of sheeps in the mooreland and production of wool. Therefore the population got known as “the wool traders” (in Danish: Uldjyderne), when they walked from door to door, selling home made knitwear.

The motor sports club for Herning and vicinity got founded on October 6th 1937. Its first speedway team was named “Uldjyderne”, (The Jutland woolers) 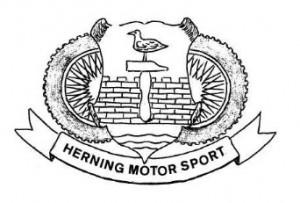 The club had its first track in 1947 located in an area owned by the manor house “Herningholm”, which today is a museum and a park almost surrounded by Herning city.

From 1956 to 1965 the club succesfully ran the speedway at the village Sinding, not far from Herning.

In 1962 HMS was appointed organizer of the Danish Long track Championship on the trotting track in Skive. The same meeting included a Denmark v Sweden nations match for sidecars..

Late in the 1960-es a large area of moorland at Uhre near Karup (civil and military airfield) was acquired for establishing of a moto cross track, and shortly after a speedway got added to the plant. The latter got officially inaugurated in 1971.