Esbjerg Motor Sports club acquired in the early spring of 1946 an area 7,5 mile east of Esbjerg at the Korskro (an old road inn – now abandoned) to build a motorcycle race track, which was to be done by voluntary work from the club’s members.

On Sunday July 7 1946 more than 6000 spectators watched the Mayor of Esbjerg open the Korskro track. The meeting was for motorcycles only, and the riders came from near and far away. Everyone agreed that the track was the best in Denmark.

Near the end of the 40es also car racing was added, but motor cycle racing was still the main activity.

The activities stressed the club’s economy, and in 1953 a substantial loss of money was reported. It didn’t help much that the authorities demanded a higher safety level for the public. Therefore the Speedway meetings got moved to the cinders track at Esbjerg Athletic Stadium.

In 1955 the track got expanded. Once again by voluntary manpower from the members, and a new management got hold on the economy. Trough the 1960-es with more than 10.000 fans attending every meeting things. The deficit got converted to a solid plus, which gave considerations over what to do with the tracks

By early 70-es time came for renewal. The dimensions of the track did not suit international meetings. The economy dropped as the number of spectators did, and the wages for hired star riders escalated.

The old track got abandoned, and the work with building the greatest motor stadium in Northern Europe, suitable for international events began – still by the members’ voluntary work. 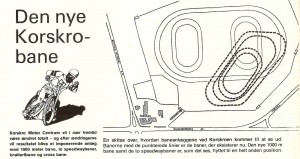 May 1. 1977:
The new track – now called Esbjerg Motor Center opened  With 2 speedway tracks, 1 long track and 1 moped track it swiftly was named as the best track in Northern Europe. The dotted lines show the old track. 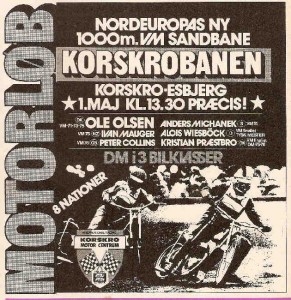 Programme cover from the opening of the re-built long track

Internationally the response came already in 1979, when the track got selected for the World Long track Championship semifinal. See programme cover below. 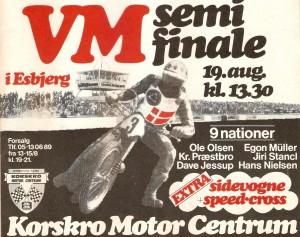 Note the elegant and spacious referee’s tower lifted over the terraces, 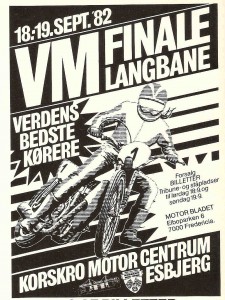 A climax in the track’s history was the World Long track Championship final in 1982. Likewise it was a climax  for Esbjerg Motor Sport, who with more than 20.000 spectators enjoyed at great economic success. Not the same could be said about the Danish riders, of which Ole Olsen came out the best with 7th place,

Besides having performed brilliantly on tracks all over the world, riders from Esbjerg have always been attractive  for other clubs. Riders like Aksel Jepsen, Kristian Praestbro,  Bent N. Jensen, Kent Noer, Lars B. Hansen, Claus Jakobsen, Jesper B. Jensen (Monberg), Rune Holta og Henrik Kristensen all have grown up there.
Not to forget Erik Gundersen, who first rode on the track 15 years old an made himself a career, which before the accident in 1989 brought him 17 World titles and made him the hottest name ever in Esbjerg Motor Sport.

In 1984 a project for further development of Esbjerg Motor Center got submitted. The speedway got rotated 90° in relation to  its position in 1970 and placed in the western end of the long track, which ends got  semi circular shaped. The mini speedway – not shown – got located in the eastern end.
North of the track a moto cross trail was projected. 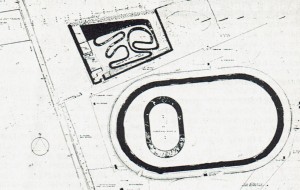 15. September 1985, World Long track Championship Final:
Once again in 1985 the World Long track Championship final got staged at Korskro. The Danish rider, Finn Rune Jensen got selected by the DMU’s sports commission as the only Dane to participate. This decision got heavily argued in the press before the meeting. The opinion was split in 3. Many- possibly the majority – said that Hans Nielsen should have been selected. Others said head shaking that the sports commission acted unprofessionally and untrustworthy. Further some reacted silently by simply not attend the meeting.
Hence both the organizer and Finn Rune Jensen innocently fell victims for the great pressure, which from outside was imposed on him and lead to a disappointingly low number of spectators

18. May 1986. Opening of a new mini speedway:
A new and very modern track for mini speedway – now 80 cc – opened in May 1986. Due to its qualities for the riders as well as for fans and officials it soon got nicknamed “Little Wembley”.

Later an even shorter track suited for micro speedway opened. 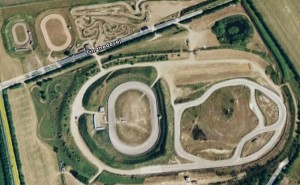 On the satellite photo from 2008 the outlines lines of the abandoned long track – now a part of the auto cross track – can be seen. The speedway track is surrounded by very high noise abating walls. With some eye effort the outlines of the old moped track can barely be seen in the right side. North of the entrance road the micro speedway, the 80 cc speedway and the Moto cross trail are visible.

Development of the track has not ceased, The speedway has been turned 180 degrees, and a sky box for the referee has been erected at the western straight, Floodlight is installed, and lately the riders’ safety is strongly improved  with air fence in the bends. 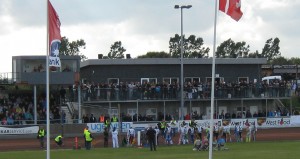 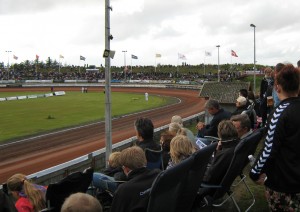 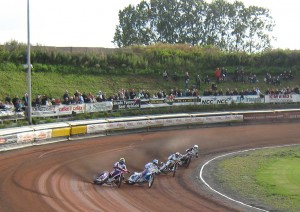 The pictures above is taken at the Danish Championship Final in 2011.
(Photo: Speedwaylife)