Svendborg is the second largest city on the island Funen, It is more than 750 years old, and has through all years been connected with shipping.
In 1904 Captain Peter Maersk Moller and his son bought a second hand steamship and founded the MAERSK company, which since has developed to one of the world’s largest shipping companies. Beautifully located on the southern banks of Funen Svendborg is the gate to the archipelagos with many small islands. 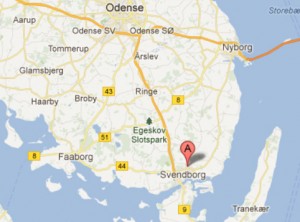 Shortly after WW2 the Danish motor clubs’ hunger for getting  their own track grew almost unrestrained.
1946 – with the exception of a few minor attempts in 1945 – was the real revival year for motorcycle sport, when at least 15 new  circular (oval) tracks, or in new terms,  speedways got opened.

The trend was “Every club its own track”.

Some of these tracks were quite primitive earth tracks, where the grass was scraped away, and the ground approximately leveled. The fence to keep the audience safely away from the riders was merely a wire mesh fence hung on wooden poles around the track.

Such a track was, what the Motorcycle Club Svendborg opened in the village Tved due north of Svendborg city. The terrain formed natural spectator stands with good visibility, but after few heats the track could dust off dramatically when the riders opened the throttle.

15. September 1948:
And again full throttle was largely given in the special class both by the local riders Aage Jacobsen, the veteran Egon Rasmussen, Robert Vedsted Hansen and record holder Carl Otto Jensen from Ejby.

Also in the standard class with among others the popular Niels E. Nielsen from Bogense, Poul Kalor and Kaj Holck Mogensen from Odense, the throttle was not restrained.
Among sidecar riders also Knud E. Mogensen and Johannes Hansen from Odense together with the more than 50-year-old David Axelsson from Copenhagen – still going strong – on his DANIA bike with JAP engine, were seen.

However the great optimism did not last long. There were many riders, but few had quality enough to be the big audience magnets, which would raise profit for the club after the tax was paid.
And the competition between the organizers to hire just such riders was tough.

So after only two years in operation in Svendborg, the Tved track got closed after the 1948 season.

The Motorcycle Club Svendborg is still active, now in moto cross on a site near the motor way to Odense.