In the beautifully highland lake district between the towns Skanderborg and Silkeborg the small peninsula Hem Odde protrudes from the southern bank of Lake Mosso some 5 miles west of Skanderborg. Here was the location of Hem Odde speedway. (See the map).

The village Hem who has given name to Hem Odde is merely a cluster of very few houses. There also was a small hotel owned and run by the married couple J.A. and Dagmar Andreasen which during WW2 had been a popular holiday accommodation for many people.
After the war the hotel looked for new ways of increasing the turnover. Dagmar Andreasen came up with the idea of organizing speedway meetings on the peninsula. 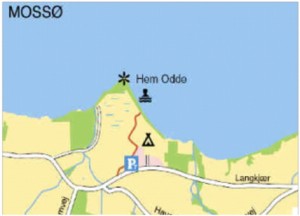 The map shows the peninsula Hem Odde protruding into the lake Mosso,
where the speedway track was from 1946 to 1957.

In co-operation with Aarhus Motor Klub a speedway got built on a flat location between the hill and the shore of the lake. From the slope of the hill there would be an excellent view over the track, so there was no need for a grandstand. Also Motor boat racing an the lake could be watched from there. 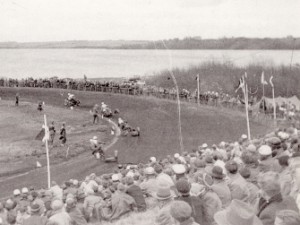 At the opening nearly 10.000 fans came in, and such number
got repeated many times during the track’s lifetime.

The motor club should run the track, and the hotel’s restaurant should serve the expected amount of spectators, thus getting a substantial increase in turnover.
From the very beginning the track competed with the Snoghøj track to be the most beautifully located track in Denmark. After the closing of Snoghøj in 1950, Hem Odde held that position until its closing day. 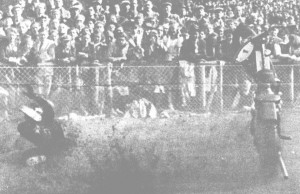 In 1947 Svend Aa. Sorensen from Copenhagen took a close up look at the Hem Odde track 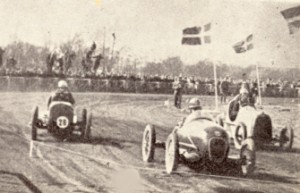 On May 11. 1947 the track was the first in Denmark to introduce the small
midget car racers, driven by a 500 cc motor cycle engine.
Robert Nellemann from Randers is leading the pack. 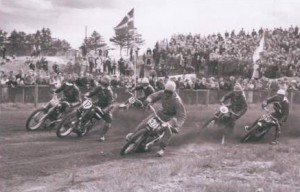 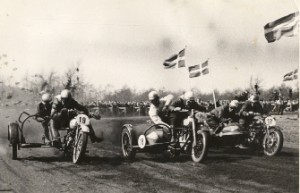 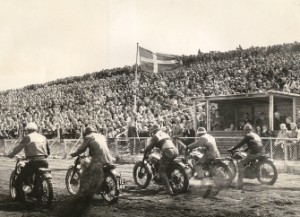 The Standard bikes at the gates. Note, one of the bikes with a license plate. 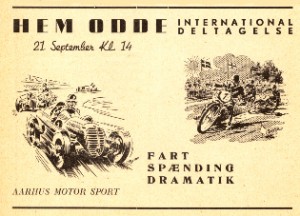 In 1951 Aarhus Motor Klub withdrew from the meetings at Hem Odde. Subsequently and until the closing day the meetings got organized by the new Hem Odde Motor Klub, which together with the track turned into history at the closing, 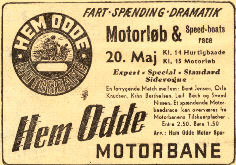 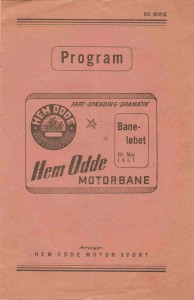 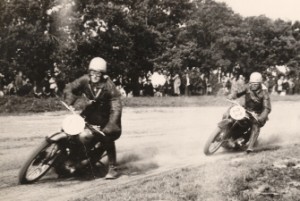 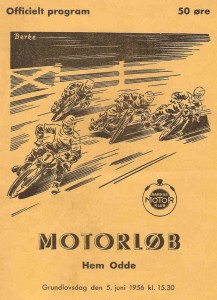 After closing of the track the site got converted to a camping site, and no visible signs of the track are left.

The hotel and the speedway were none of Dagmar Andreasen’s main interrests.
In 1951 she moved back to Funen where she was born. There she joined her mother’s plant for pressing apple juice, known under the name “Rynkeby Mosteri”. She took over in 1953 and developed it from a small family enterprise to a modern large scale industry for apple- and orange juice.
Then she went into politics and got elected member of the Danish Parliament (1968 – 1975). At the same time she wrote several books.
As a special pastime she in a period owned and sailed a single seated mini submarine.
Aged 85 she passed away in 2006.