Motor racing on the velodrome

Sources: “From Th. Ellegaard to Palle Lykke “by Ib Vagn Hansen, 1958
“Ten years behind the wheel” by Alfred Nervoe 1917

This velodrome, which opened on 27th May 1894 was a 340 m long earth track, built and paid for by Funen Bicycling Union, was located in Odense SW directly opposite the railway station along the railway line, Odense – Svendborg. 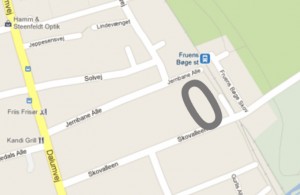 The oval symbol indicates approximately the location of the velodrome.
Dim’s not to scale.

The bends was banked approx. 6 feet. = Approx. 1.9 meters from the infield and out. The width is not recorded, but was probably about 7 meters. The following year the track got concrete surfaced. At the same time it was widened, and the banking of the bends was increased to 7 feet = approx. 2.1 meters. By the re-opening on June 3rd 1895 it was referred to as “The finest track in Denmark” 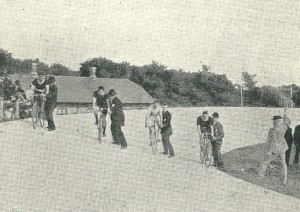 The picture gives an impression of the track width and the banking.
The house in the background is the railway station.

Some of the greatest bicycling names those days were the brothers Thorvald and Peter Ellegaard. (Thorvald’s career brought him multiple World Championships in bicycle sprint).
They were born on the farm “Ellegaard” in the village FANGEL 6 miles southwest of Odense. Thorvald was a bricklayer apprentice.
When their father for health reasons sold the farm, the family built, mostly with Thorvald’s labor, a living house close to the velodrome. From there the father could assist at the meetings and do some maintenance work.

By 1905 interest in bicycle racing with motor pace emerged. An exciting and potentially dangerous sport originating from Germany, where a cyclist riding behind the very upright motorcyclist – the so-called “Stayer” – could achieve great speeds over several laps.
The driving force behind this initiative was Rasmus J. Rasmussen, son of factory owner J. Rasmussen from the famous clog factory and shoe shop “Fremad Ekspress” in Odense. 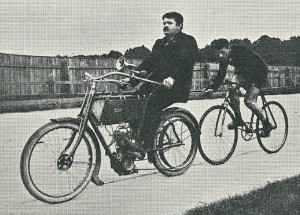 Stayers riding on the track approx. 1905

In 1907 the motor sport in Denmark was not yet very well organized, but several clubs arranged reliability tests. E.g. the Danish Motor Club’s 100 km. event “Tour of Zealand” and a similar tour of Lolland Falster.
Funen  Motor Club arranged on August 18th a 128 km. long reliability test in the morning followed by 10 laps time trials on the velodrome in the afternoon. This event was attended by 46 motorcycle riders and 14 automobile drivers.

The Presidium of the event was headed by Baron Bille Brahe Selby. Several thousand spectators flocked to the track.

In 1917 the famous journalist, air pilot and all round motor sports man Alfred Nervoe wrote in his book “Ten years behind the wheel” about the race, in which he took part himself, that the velodrome was not particularly well suited for motor racing, because the bends were too flat, so the bikes could not keep high speed, and bends were abrasive to the tires. In addition, the track was so narrow that the cars could only run one at the time.

The motorcycle class was won by the riders Johannes Andersen and Suhr Westi on “Peugeot”. The time for 10 laps is not recorded.
Commander Richelieu won the car class with an 18 hp “Darracq” in the time 4,48,5 min. equivalent to 44 km. / h. , which however in 1907,  was quite respectable.

Another meeting was staged on the velodrome on July 26th 1908. We do not know any results. Further motor meeting are not unlikely, but we have not found any records hereof.

The gates in front of the referees’ tower in the infield.
The track surface appears to be wet.

The economy got still poorer, and the company behind the velodrome liquidated in 1910. The track got demolished. The site got sold and developed to residential houses. The only thing left was a water tap that stood in the infield. It remained standing for many years after as the only visible reminder of what once was.

In 1907 a meeting was held in Odense between the Danish Motor Club, Elleham Club, Lolland-Falster Motor Club and Funen Motor Club to discuss formation of a Danish Motor Union. It lasted until 1914 before it became a reality.