The old road inn ”Jægerkroen” (Hunter’s rest) was located a few miles outside Copenhagen in a small village named Ishoej at the old road – now route 151 – leading from Copenhagen along the coastline of the Koege Bay to the town Koege.
Nowadays Ishoej has grown substantially and is a part of the Greater Copenhagen Municipality.

The Landlord of the Hunter’s rest, Mr. Kay Sorensen, took in 1930 the initiative to build a dirt track adjacent to the inn.

The dirt track at Roskilde way in Copenhagen had since 1928 been running for full and enjoyed great attention from thousands of dirt track fans, but an estimate found the public big enough for a reasonable income for another track.

An advertising for the track declared that with its location near the seaside and with many grass covered spots around the track it was well suited for family picnics for those, who would come early and have some nice, cosy hours before the races.

Not without ambitions the new track was given the name COPENHAGEN SPEEDWAY, obviously as challenge to the track at Roskilde way. The meetings would be organized in cooperation with Copenhagen Motor Club who also used the inn as a meeting room and get-together place.

According to the schedule the track should have been opened on the Danish Constitution day, June 5th, but lack of the final permissions caused the opening postponed to June 15th.
On Wednesday before the opening a practice session was held after which the riders said, that the track was very fast and easy to ride through the bends, but dusty and would need a lot of water before the Sunday meeting. 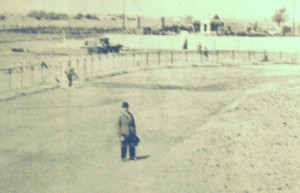 This picture is taken shortly before opening of the track.

The landlord’s two sons, who rode in Germany, came home for the opening and brought with them two German riders, Werner Gunz and Karl Binder – Sam. From Copenhagen came Morian Hansen, Ejnar Knudsen, Knud Hornung, Ingemann Rasmussen and Ejnar Hansen together with Helge Jensen from Korsoer. Unfortunately we neither have the programme nor the results.

On August 30. 1931 the track hosted various show events like balloon hunting on motorcycle, football games likewise on motorcycle, according to reports not entirely following the rule book. Further there was a skeet shooting contest and a parade of police dogs plus a 1200 m. horse race. Finally a dirt track handicap race which, as far as could be seen for dust, was won by the popular Ferdinand Olsen, ended the day. Not much more happened on the track in 1931. Corporate gatherings played a major role among motor sports people.

The landlord Mr. Sorensen organized annual carnivals at the inn with “beating the cat of the barrel” and funny outfits – all of course motorized. 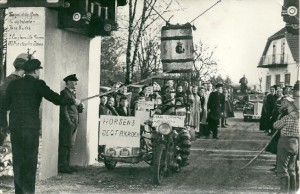 This old private photo shows the arrival to the carnival of the famous s
idecar rider Egon Walther and his passenger disguised as runaway
prisoners from Horsens jailhouse on his motorcycle, equipped with
a barred window and some break-out tools.
(Courtesy: Egon Walter’s daughter Sanne Walther.)

In 1932 the track owners signed a contract with the Dirt track rider’s association for 12 meetings, of which the first got staged on June 12th attended by about 2000 fans. Four races, all split up in more heats were on the agenda.

The biggest issue on the day, even more than the races, was that recuperated after a long period of serious illness, the star rider Svend Aa. Engstrom appeared first time in public, strongly applauded while he rode some laps of honor on a borrowed Harley Davidson with sidecar.

As described elsewhere the Roskilde way dirt track lay idle for the major part of 1932, which was a great opportunity for COPENHAGEN SPEEDWAY. But when in the autumn of 1933 Roskilde way resumed operation.
The competition to contract good riders, who in the meantime had achieved better wages, sharpened. When in 1934 a 60 % tax got imposed on the entrance fee, running of COPENHAGEN SPEEDWAY did no longer pay off.

When the track closed, we don’t exactly know, but 1934 appears to be the last year in regular operation.
The management got troubled by an interjunction case, because of lacking payment to the riders.
The Danish Motor Union intervened and negotiated the case to be withdrawn..