After the end of WW2 the Danish motor sport woke up again i 1945, and in 1946 Bogense Motor Klub decided to build a new 500 m. long  track in an area east of the town, which the club hired from the municipality of Bogense   On June 23. 1946 the track opening was attended by 6000 spectators. Immediately the track got highly praised by the riders, the fans and the press.
The fight i the heats were tough with more crashes, but apart from a broken collarbone everyone escaped unhurt. 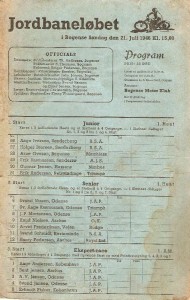 A Finnish team of five riders on their way back home from a great event in Belgium called in at the track on July 21, and an addendum to the programme was swiftly set up with a team match between Finland, Jutland, Sealand and Funen

On August 25 1946. Svend Aa. Engstrom sat a track record 1,45,4, that lasted for many years.
This original picture has been used in many other contexts. Among others the Motor Book
in 1951 used it in an article about the Snoghoj track, to which it had no connection.

Orla Knudsen ahead of – 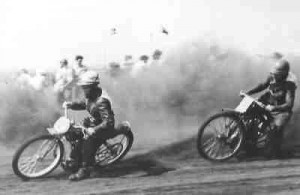 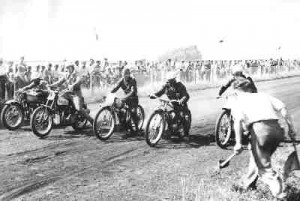 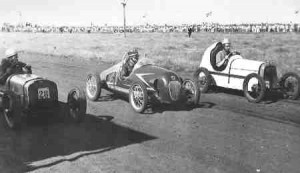 In 1947 a race for midget cars – small selfdesigned and homebuild cars driven by a 500 cc motorcycle engine Jap or Norton – was on the programme. The driver Robert Nellemann from Randers in his elegant little racer “Silver Bird” showed superiority. 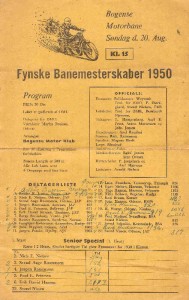 At  this meeting the Swedish rider Arthur Ovesen suffered a pelvis fracture. At the prize ceremony after the race the other riders showed solidarity with their unlucky Swedish comrade by raising funds to pay for his medical treatment

As time went by, the public attention was drawn to the meetings at Odense Athletic Stadium and the Fangel Track. The Entertainment tax on the entrance fee got reduced in 1949 from 60% to 20%, but that didn’t help much.

In 1950 the club considered to close the track, but decided to keep it and downgrade it to a training track.

After a failed attempt to revive the track, in 1954 the sad decision to close the track and sell reusable materials, was taken. In 1955 the track got demolished.