Despite the poor quality of the picture, it still gives an impression of the track.

11. april 1948. Season opening:
Thanks to good weather many good riders and appr. 5000 spectators got a fine day.
It opened with two by two laps, for which the fastest time was ridden of Knud Nielsen, Aarhus in 45.5 seconds. 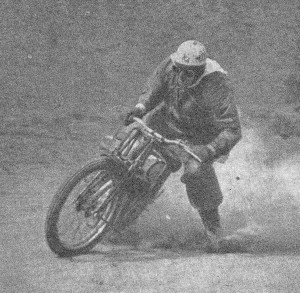 No more meetings are recorded from the track in 1948. Like most of the other Danish tracks it got hit by the Danish secretary of trade, Jens Otto Krag’s foolish and malplaced banning of motor racing. A ban that got lifted in March 1949. 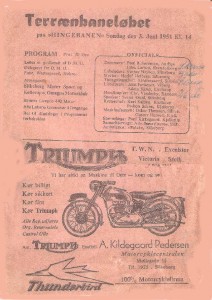 Programme cover from 1951. Confusingly; on the cover it is printed terrain race.
Many would regard that as scramble. It was not. The Hinge track was
an ordinary oval track,with minor height differences from bend to bend. 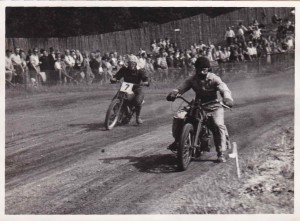 Rider no. 7 is Arly Jensen. Inside is Richard Mathiesen riding a Harley Davidson 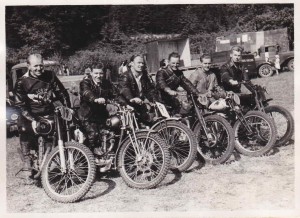 June 2. 1951. Randers riders at Hinge. From left is Henrik Baekgaard on AJS.
E. Jacobsen, Kaj Lykke, the twin brothers Niels and Ove Floor, all on BSA,
and outmost Richard Mathiesen on Harley Davidson.
The picture is likely to be the last one of Niels Floor.

A newspaper from Randers wrote according to this clip, sent to us from a relative to Niels Floor, that he at high speed lost control over his bike, hit the fence, fell and got slung back on the track.  A rider behind him tried to avoid him by laying his bike down. Unfortunately his footrest hit Niels Floor in the head. At arrival to the hospital he got declared dead. The race doctor said that presumably he was dead already on the track.
All flags on the track went on half mast, and the remaining heats on the day got cancelled.

The reason for the closing of this track is said to be a fatal crash on July 1st 1951, where the rider Niels Floor aged 19 sadly lost his life in the beginning of a promising career

.After the accident the authorities demanded increased safety precautions, which neither club due to poor economy were able to fulfill.
After that the authorities banned further usage of the track.

At the Kjellerup club’s general assembly on April 21. 1952 in agreement with the meeting organizer Silkeborg Motor sport it was decided to close the track