Skaerbaek is a minor town located at route A11 in the south western part of Jutland between the larger towns Ribe and Tonder. 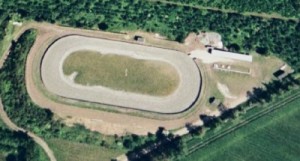 Skaerbaek Motor Klub got founded in 1974 by some young people including a very young Tommy Knudsen, who swiftly grew up to become a star on speedways worldwide. The club produced many fine speedway riders, among others Henning Boysen, Hans ”Jönne” Hansen, Torben Hansen and Hans Clausen.

A young Tommy Knudsen was on the front
page of this programme from 1980.

Through the first many years the club had many excellent leaders of which in particular Mrs. Else Hansen, whose son “Jönne” was one of the leading figures in the club’s moped speedway team, will be remembered.

On to 1990 the club flourished and enjoyed respect both as club and as track and with it’s rider’s performance, of course firstly with Tommy Knudsen’s Danish Championships in moped speedway in 1975 and 1976 and the club’s Danish Team Championship in 1990.

Like other speedway clubs in Denmark also Skaerbaek Motor Klub mid 90-es got hit by a recession which nearly spelled the end of the club.

The webmaster of this site had on June 15. 1993 the pleasure to be referee at the semi finals in the 80 cc Championship of Jutland ridden on the Skaerbaek track. Afterwards I wrote in the magazine “Motor Bladet” about a not encouraging job. (In extract below):

”Sad thoughts emerged already at my arrival to the track, where entrance to the referee’s hut had to be forced by means of a crowbar. Everything had been nailed to avoid thefts and vandalism. Inside on the wall brown and dusty laurels hang in spider webs as a sad reminder of a glorious past. The heydays were over. People in the pits talked about a likely closing of the track. The officials struggled hard to get the track installations to work – luckily successful. Two good semi finals got ridden, only with the riders’ parents to watch. The terraces were empty, and the riders didn’t get the applause they disserved for their fine riding. The reason? – Here as everywhere. Money – money and money together with lack of qualified voluntary leaders.”

Anyhow the club survived, but around the millennium shift the few riders left had to ride for other clubs, if they wanted to ride in the Danish tournament. Then in 2005 the former rider and national coach for the youth Torben Hansen came up with a plan to save the club. An Open House session in the fall of 2005 attracted a great number of children and youngsters aged from 4 to 15 years to come and try riding a speedway bike. Only few new members came, but it created a general attention to the club. Then the track itself got leveled out, and a new safety fence got erected. The pits, the terraces and the referee’s hut got a major overhaul.

A View over the re-newed track, taken from the club’s website.

Denmark’s Motor Union agreed that the FIM Youth Gold Trophy, which in 2006 should be staged in Denmark from July 12th to 15th, would go to the Skaerbaek track. With young riders from 10 nations and with more than 5000 spectators watching Denmark for the 6th year in a row getting an 80 cc World Champion the club and FIM recorded a great success. 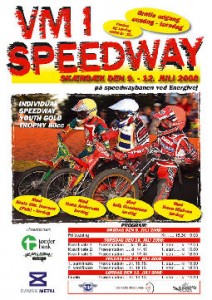 The programme cover from YGT 2006

Afterwards the club organized some new Open House sessions, and out of approx. 120 visitors the club acquired 15 new riders.

In 2007 SMK got a club lodge with toilets, cafeteria, children’s room, a meeting room and a semi-roofed terrace erected. SMK was one of the first in Denmark to get a moped speedway i Denmark and the last one to get a toilet. 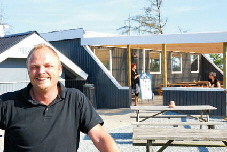 A proud Torben Hansen in front of the new club lodge. 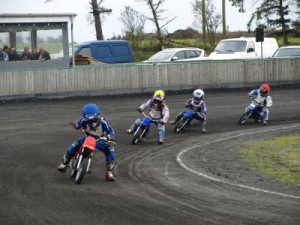 Picture from SMK’s website showing the micro riders in action

The final in the Danish 80cc Championship 2007 was staged on the Skaerbaek track with Mikkel Michelsen from Slangerup as winner.

Once again in 2008 FIM asked DMU and Skaerbaek to organize the YGT semi- and Finals. And once again it was a great success. Mikkel Michelsen took the title back to Denmark after it in 2007 went to Sweden by Anders Mellgren. Not even a one hour delay of the final due to heavy rain could reduce the joy.