The race got named after the former longtime chairman of Aalborg Motorklub and well known rider from the1930-es Mr. N.O. Jensen, and was called “N.O. Jensen memorial “. The objective was that so many different motorcycle classes and age groups as possible should compete in friendly forms.

September 10 2000 “N.O. Jensen memorial ” # 1
The meeting was held with strong support from both riders and spectators. With 7 solo classes, 3 sidecar classes and a quad racing class and a total of 85 participants it encouraged to embark on starting a club, whose purpose was to bring the sport to the masses at low cost.

The founding meeting was held on November 15. same year. Claus Quistgaard was elected President of the club, and only a month later, the club got adopted in the Danish Motor Union.

In 2001 the new club presented a comprehensive seasonal program, which in addition to meetings at Ornedal speedway also included a repetition of “N.O. Jensen memorial ”
In the following years the club developed  “N.O. Jensen memorial ” to a September tradition, each year in cooperation with other local clubs.

The format was fixed with practice on Saturdays and socializing with dinner in a large tent on Saturday night. Before the race on Sunday from early morning there was various entertainment, among others tractor pulling. 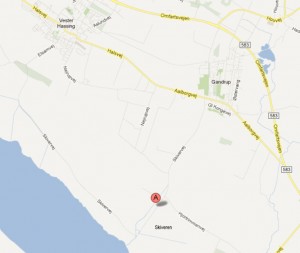 The first three years was the track laid out in various areas south of Gandrup,
but then the following years on the address Skivervej 37, marked A on the map. 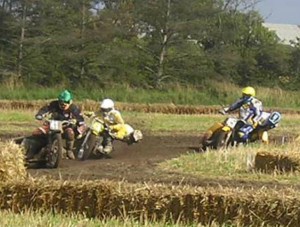 For several years SMG worked to revive the almost forgotten machine class called Sport sidecar, which is petrol-powered sidecar motorcycles of street type, previously an established class on soil tracks until the middle of 70-s.
Many – by now elderly – riders still had such machines left over, which sometimes  were used for showrides during intervals in speedway meetings, or otherwise ridden mostly on the Skovby track near Haderslev.

Claus Quistgaard got in touch with others interested in this class and the Speedway control board, and after a few – sometimes hard – negotiations, it was agreed upon a rule book for the class. DMU would accept a National Championship in this class, only if a minimum of 12 pairs who met the regulations, could come to start.

A 500 cc sports sidecar in action