The German engineer Gottlieb Daimler got in 1883 a combustion engine, in which the movable part were so light, that the number of revs./min. could go up to 800 – 1000, patented.
This made it possible to build a lightweight engine with adequate power to propel a light  vehicle.
Three years later he proved the correctness of the idea by showing the world’s first motorcycle to the public.
Daimler is generally credited as inventor of the motorcycle, but about 20 years of developement work was needed, before the motorcycle as such was suitable for practical use. 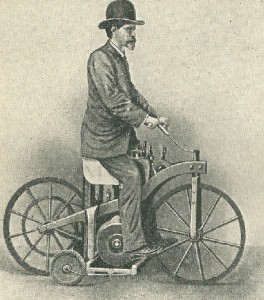 Since the first motorcycles were made usable, the motor sport began spreading in a larger scale in Copenhagen and its vicinities.
Competitions of various sorts got arranged on the road in the outskirts of the city. Mostly it was enthusiastic people from the upper classes in Copenhagen, who offered prize money to those who in the shortest time could cover a route along twisted roads to a target outside the town.

It would not be fair to say fastest. The bikes of the past were not at all fast. In fact they were deeply unreliable, and the macadam surfaced roads were a nuisance for the tires.
More than speed, the big issue was to ride through with lesser punctures and engine failures than the competitors.

A number of mechanics and bicycle fitters attempted to build their own bikes and prove their ability in these events.
One of the best known was I. C. Ellehammer, whose scooter like bike was one of the most reliable.
Ellehammer himself rode in 1904 and 1905 in reliability contests and won prizes both years. Many of those days’ celebrities also rode on Ellehammer’s bikes. Among others were the royal princes Valdemar, Georg and Axel and the famous journalist and air pilot Alfred Nervoe 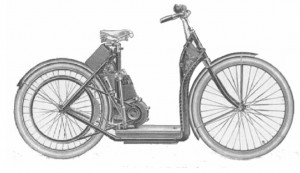 In 1920 the young engineer A. P. Fisker came up with a motor cycle design close to geniality. The Nimbus motor cycle, which with its 4-cylinders in line engine ran almost without vibrations, with its drive shaft concluded the never ending fights against broken chains or drive belts, and with its spring suspended rear wheel gave some comfort for the rider on bumpy roads.
Soon it was given the nickname “The Stovepipe” owing to the large central tube, which also served as gas tank. It gained reputation for a unique reliability which despite modest power gave the make numerous victories and founded the basis for the only full-scale production of Danish motor cycles.

The Motor Sport organized itself:

In the year 1901 “Pioneers having the speed devil in their bloodstream” formed the first Danish motor clubs, of which some profiled motor cars as well as motor cycles.

Unavoidably that created disagreements and led to defectors who in 1904 formed the “Danish Motor Cycle Club”.

Some imported makes like e.g. the Swiss made Motosacoche *) had passed the experimental phase, and formed in 1907 with 10 members the basis for the first make club in Denmark.
Through the following years the club accepted members owning other makes of motorcycles and changed its name to “The Motor Cycle Club of 1907”, which again in 1912 got changed to “Danish Motorcycle Club”. 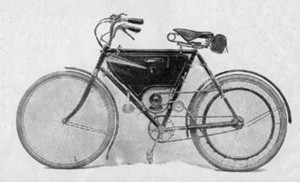 *) The name Motosacoche means ”Motor in a bag” and refers to a small pre-packed engine assembly easily mounted to an ordinary bicycle, sold by the factory.
This club together with four other clubs founded in 1913 ”The Permanent Sports Committee”, which should restrict and control the growing number of races.
The committee changed in 1914 name to ”Dansk Motorcycle Union” , which again changed to ”Danish Motor Union”.
That did not come easy. A great number of clubs could by far see the idea in joining. Anyway the union survived and has in 2014 celebråted its 100 years anniversary under the name “Denmark’s Motor Union”

The very first oval earth track, purposely built for motorcycle racing, in Scandinavia and most likely in Europe opened in Bagsvaerd, a suburb north of Copenhagen in 1920. Two years later followed the opulent motor stadium in Glostrup, wich collapsed financially in 1928, same year as a private compay opened the dirt track on Roskilde road in Copenhagen,
With the conversion in 2008 of Copenhagen Speedway on Amager to a BMX piste a sad end came to the era of permanent speedway tracks in Copenhagen.

As prospects are after the first decade of the 21st century, there is no reason for optimism.
Neither the political nor the economic climate in the former so progressive and active Metropol appears motorsports friendly.