The World’s first dirt track was Danish and located in Bagsvaerd near Copenhagen.

This statement most likely will be argued, but I have some documentation for it.
Speedway historians worldwide generally agree that dirt track as forerunner for nowadays motorcycle speedway emerged in Australia in 1923. According to the British magazine Motor Cycling the first English dirt track meeting got staged on May 7th in 1927 in Camberley, Surrey.

At the opening of the Bagsvaerd track in 1920, it was said to be the first oval earth track in Scandinavia, purposely built for motorcycle racing, and as such also the first in Europe.

By placing the track in a time line with other such tracks in the world with confirmed dates for first presentation of motorcycle racing, we get as below:
(Source: Rennen / Races / Vitesse, Racing circuits factbook)

A motorcycle dirt track is characterized by being flat, oval shaped by two parallel straights connected both ends by semi-circular bends. Start- and finish line is the same, and the track width is clearly marked inside and outside. Track surface shall be loose granulated material like earth, gravel, cinders etc.
The Bagsvaerd earth track surely met all these characteristics.

The bikes however were ordinary street bikes, modified to each rider’s personal liking with flat or down bend handlebars, removed or shortened mudguards.
Special built dirt track bikes did not come until 1926 (Douglas)  For same reasons the bends had to be passed without provoked broadsiding and with a speed balanced between the rider’s skill and courage, which can be read in the achieved winning times. 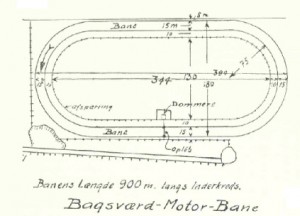 It is noteworthy, that around the outside of the track no room was left for spectators. Instead 10 meters from the inside marking of the track a fence was erected, behind which spectators could stand. That did not give them the best overview of the track,  Also the elevated referee’s box was placed on the infield.

”Dansk Motor Klub” was planning a new motor stadium (see Glostrup) because the Danish government intended to ban all speed competitions on public roads.
A group of 44 persons felt the progress went too slow and gathered in 1920 in a new club called “Motor Sport”. Chairman of the new club was civil engineer Mr. N. T. Beier. 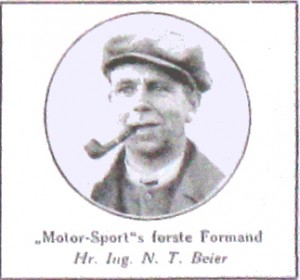 The club had gained access to an area of the ​​farm “Thorasminde”’s  fields about. ½  mile south of Bagsvaerd railway station (the old). It was poor land with much gravel. Here it got the owner’s permission to build the track, which covered three titles.
They are all today built with Novo Nordisk buildings and headquarters. See the map below.

The track position is plotted on the map of Bagsvaerd in
the area between Laurentsvej, Smormosevej and Krogshojsvej.
In 1920 it was an undeveloped area where Laurentsvej
was merely a graveled footpath.

With voluntary manpower from the club’s 44 members in all secrecy a 900 meters long earth surfaced oval track was built.
The opening took place on Sunday October 31. 1920, merely 14 days after the club revealed the news to the public. 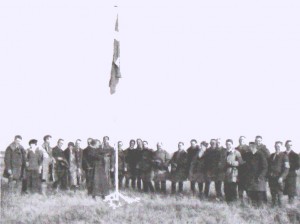 The first raising of the Danish flag over the Bagsvaerd track 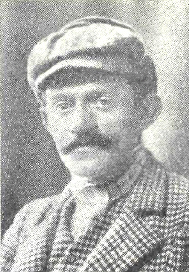 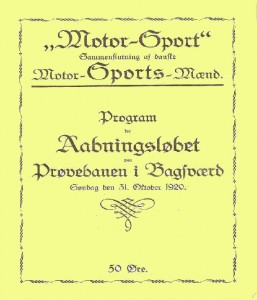 The original programme cover from the opening meeting

The Programme contained 16 heats, all ridden over 4 laps of 900 meters with standing start. The opening meeting was nothing but an unofficial club meeting in rainy weather; nevertheless some thousand people came, including King Christian the 10th, who spent half an hour talking with the riders. 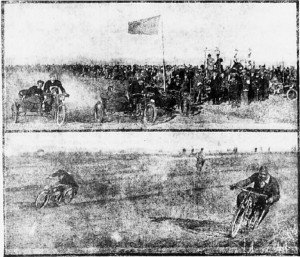 92 years old newspaper photos have lost quite a bit of their quality,
but anyway we bring them,because they show some moments of riding on the track.
Upper photo shows sidecar gating,the lower shows solo riders cornering.
Even without broadsiding the bikes could raise big clouds of dust.

The  Copenhagen newspaper POLITIKEN wrote the day after the meeting. in the report that the track resembled the American “Dirt oval” which can be seen near many American cities. The American was also present in the impressing speed in which the track was built.
Yet it is not flawless, especially in one of the bends. The organizer is aware of the problem, but still do not agree with the land owner how to correct it. 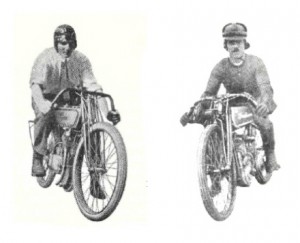 The economy was based on a betting license for 1921. The track history is a short one, mostly owed to the lack of surrounding space. When the track closed in 1922 some members of the board, among them Mr. Beier entered the board at the larger track in Glostrup, which opened the same year.

But nevertheless it must be remembered as the very first permanent oval track built solely for motorcycle racing in Denmark and Scandinavia, and that happened 8 years before British Dirt track got introduced in Denmark.

In the slot below you will find a video clip ffom the opening meeting showing racing, stunt riding and the visit from King Christian X. (He was a very tall man)

If you posses any informations, stories, pictures or other material regarding this track,
you kindly would make available for this website, please do so by proceeding
to the contact page or by using the e-mail adress: sk@speedwaylife.com
Thank you very much in advance.