The “Han Herreds Motor Klub” (HaMK) in Northern Jutland got founded in 1957. The club organized some tours and picnics for its members and their families. On the sporting level, the club  organized some hill climbs and scramble meetings. One winter also an ice racing meeting got staged at  Aggersund on the frozen Limfjord.
Gradually the club lost momentum and came close to a halt.
Inspired by Ole Olsens’s World Championship in 1971 the club decided to adopt speedway in 1973 in the in Northern Jutland.
There was no track, but an area named “Mou Kær” 3 miles north of the small  town Brovst was made available for the club. 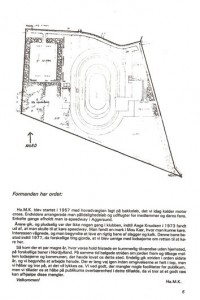 The layout of the Brovst speedway

Soon the work began – almost by hand showelling – to dig out a track on which 50 cc moped speedway could be ridden. The fence was stacks of old car tyres, and the very first race was ridden on homemade moped racers.
Among the very first to ride on this track was a young lad named Hans and his elder brother Jens Henry, both with the family name Nielsen.
Both, but in particular Hans made himself a glorious career, which is excessively well described elsewhere.

The moped boys grew up quickly, and with them the need for track suitable for 500 cc racing.
In 1977 some discrepancies about the right to ride on the track occurred, and the riders had to ride on other tracks. With help from the municipality the problems  got settled.
The new 300 meter long track with international dimensions got built around the moped track, which after removal of the tyre stacks remained on the infield of the new track and is still used for 80cc and 50 cc racing.
A wooden fence got erected all the way round of the new track, and a high banked grasscovered wall was built around partly to reduce noise emission to the surroundings and partly to offer terraces for the fans.

A tiny referees box got placed at the western straight , and opposite a clubhouse and a cloack room with bath got erected. Further the pits got semi roofed. Everything finished and ready for use i 1980. 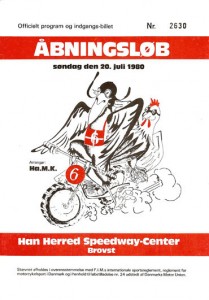 The entire plant was now lifted to a level so i could be appointed as a Team Denmark power centre for training.

In 1992 a new club, Brovst Speedway Club (BSC) got separated from the mother club, which continued under the old name as a Han Herred’s moto cross club HaMK.

The  wooden referee’s shed got demolished, and the gates got moved to the opposite straight besides the pits  Aligned with the start / finish line a new 2- storages brick tower got built with press room on the ground floor and referee’s box on first floor with windows all the way round. ( see picture below)

In 1984  the track hosted the final in the Danish Speedway Championship. Erik Gundersen won after a race off against John Eskildsen. The complete list can be seen below.. 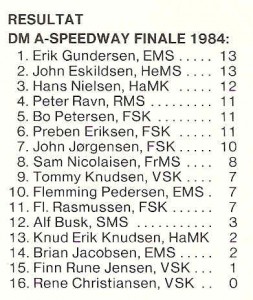 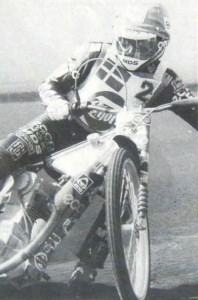 Situation from a league match 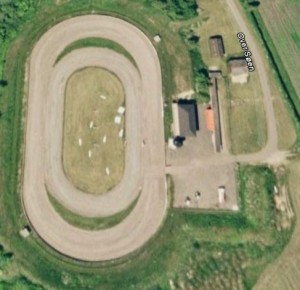