(Credit to John Williams, Aarhus for a comprehensive list of results)

Skive town is located in Jutland at the coast of the Limfjord, which from the North Sea to Kattegat separates the mainland of Jutland from the northern part. Map coordinates are 56° 34? 0? N, 9° 1? 0? E.

July 25. 1948
The North Western Jutland Raceway got inaugurated by the Skive Trotting Society as a 1000 metre long horse trotting track, located at the Southern Boulevard in Skive. 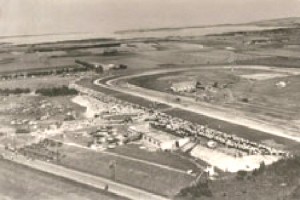 Air view of the track. The buildings were old wooden houses
from an abandoned wartime refugee’s camp.

Through many years from 1948 up to 1972 the track often hosted motor cycle racing. Organizers were the Motor Club for Skive & Vicinity, Holstebro Motor Club, Herning Motor Sport and the Jutland Branch of the Danish Motor Union (JMU).

The first motor cycle meeting at the track was the Jutland LT Championship 1948 with the results below: 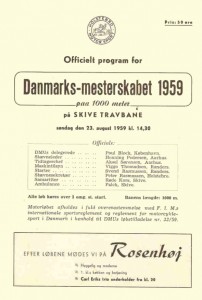 Holstebro Motor Club was organizer. All heats went over 3 laps. It was not entirely flawless. Most likely nerves confused the start marshal, who in the initial heat in 500 cc special class released the start before the defending champion, Poul Hansen, was ready. The heat got stopped, and a restart with all 6 riders was called.
Later in the 500 cc standard sport class, the starter by mistake unfolded the red flag, which was observed by the flag man at the first bend, who also showed his red flag.
The rider Niels Blumensaadt from Randers noticed the flag and stopped as he should. The other riders in the heat saw nothing and continued to the finish line with Soren Juul in front. The heat got declared invalid, and a restart was called. Once again Soren Juul finished first, this time as the real champion.
Despite these minor incidents the meeting was a success which ended in the night with a prize ceremony in the trotting track’s restaurant. 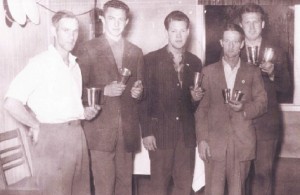 September 4.  1960, Danish Long Track Championships:
Overcast heaven and a single little shower could not keep 8000 away from Skive Trotting track, where Holstebro Motor Klub once again organized this championship meeting. There were no great surprises, apart from the defending champion in the 750 cc sidecar  class, who got knocked out by a defective gearbox. 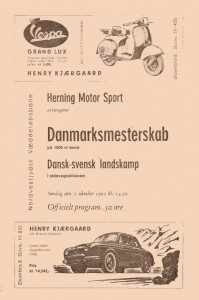 After the success in 1959 Skive Trotting Track once again hosted the Danish LT Championships in 1962. This time organizing of the meeting was laid in the hands of Herning Motor Sport. The championship classes were 500 cc. special, 500 cc. Standard sports and 250 cc sports. There were no championship in the sidecar classes. Instead of championships the sidecars rode a Nations match between Denmark ans Sweden.

May 24. 1964, Nordic-Long Track Championship:
Along with the Nordic Championship in 500 cc also heats in the classes 500 cc. sport, 500 cc senior special and 500 cc sidecar, and some automobile heats.
Results:

September 27.  1964. Danish Long Track Championships:
The Jutland branch of the Danish Motor Union organized this meeting with a well composed programme, which was able to gather 6000 spectators. However three nasty looking crashes took some of the joy away.

The track was moved to the other side of the road and got shortened, which was an advantage for the audience, who better could follow the riders all the way round.
Some of the riders complained over too many loose stones on the surface,what was a nuisance for those who  did not gated first. And because the track had not have time enough to settle properly, a lot of soil and dust got raised and caused some engine stoppages.

Relocation in 1966:
The site of Skive trotting track got expropriated in 1966 to make way for erection of military barracks.
As compensation the trotting society got paid a sum of more than one million DKK.
Some voices spoke for locating of a new track in Herning, but at the end of the day the current location, No. 2 Fly road a few miles south of the former address, got chosen. 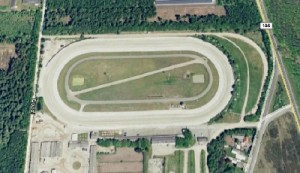 May 28. 1967, European Championship Qualification 1967:
Almost everything that could go wrong did it.
Over night some uninvited guests in white vans had enjoyed themselves by racing wild and ploughing deep ruts in the track surface. Of course  it gave some extra work for the track curator.
Then the entrance controllers came too late, so about 500 fans came though the turnstiles without paying, thus giving an economic loss to the organizing clubs from Herning and Aarhus. The Swede Ove Fundin excused himself for absence.
Ole Olsen came flying from England, but blew his engine during practice and had to start on a borrowed speedway bike on which he despite bravehearted riding could not qualify.
Worst of all. The appointed referee from Sweden Lars von Silfersparre did not show up.

These riders qualified for further participation.

Results:
250 cc. Sport:       Finn Pauli Thomsen            Silkeborg.
500 cc. Sport:       Henning Thomadsen          Randers
500 cc.special:     Kurt W. Petersen                 Ringsted.
500 cc.Sidecar:    Kurt Larsen / Leif Larsen    Odense
September 22. 1968, Danish Long Track Championships:
Preben Moller Christensen from Odense made in this meeting  an unusually big effort by participating in both 500 cc. special and 500 cc. sport and take second place in both classes. In the special class with only 1 point lesser than the winner.
Through several years Kurt W. Petersen almost has had patent to the title, but this year he could only give his engine, which was marginally better than Preben’s, credit for the victory.
Another fine effort was shown in the 500 cc. sport by 52 years old Willy Mathiasen, who with third place proved still being able to compete with the younger boys. 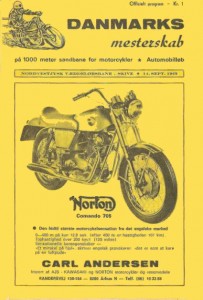 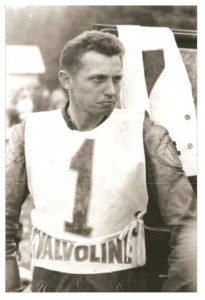 Kurt W. Petersen had hardly a reason to look cross in 1969.

Secondly, the first championship in the 500 cc. special sidecar class, with methanol powered engines got inaugurated. Not surprisingly H. C. Callesen from Aabenraa after many years victories in the sports class also took this title. 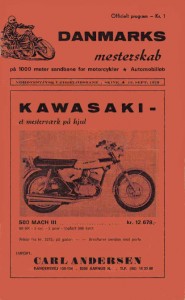 September 12. 1971, Danish Long Track Championships:
The track could welcome a newly crowned Speedway World Champion directly returned home from Nya Ullevi in Gothenburg, where Ole Olsen won the title the night before.
Now the Danish long track title was at stake, which he also secured for himself, but not without a hard fight with the defending champ Bent Norregaard Jensen, who took the lead in the final heat and resisted three attacks before Olsen pipped him on the last lap and bagged maximum 30 points.
Norregaard and Kurt W. tied on 27 points,
By the way, the meting with 4000 spectators was the first without any car class involved. 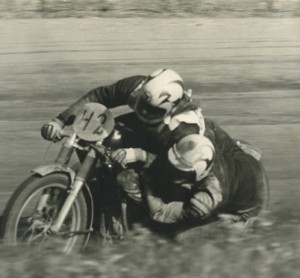 18. Juni 1972: World Long  Track Championship Semifinal:
As the former European Long Track Championship in 1971 by FIM got raised to World Championship, it became extremely important for Denmark to get some Danish riders qualified through the semifinals.
Therefore despite rain and strong wind 4000 spectators appeared at Skive Trotting track, but that more than half of them left early, could not  be blamed to the rain.

The reason was, that Ole Olsen – the greatest hope of Denmark’s – in heat 17 was disqualified for tape touching. It was clear for everybody, that the wet and heavy tape han g low in the middle and lifted unevenly.
The meeting got suspended for 20 minutes, while the race director, the FIM Steward and the referee discussed. The referee stuck to his verdict. The waves went high both on the terraces, the infield and in the pits.
The disqualification meant that Olsen lost a secured place in the final and had to settle with a reserve place.
Later Ole Olsen filed at protest against the Swedish rider Willihart Thomsson’s result. Thomsson got an engine failure 3/4 af a lap to run with his bike to the finish line to get 2 points. Ole argued, that Thomsson did not make it within the 3 minute time limit, and therefore he should not have the points he got.

September 10. 1972, Danish Long Track Championships:
The scandal at the meeting on June 8. is supposed to be the reason for the failing public attention, which gave the organizing club a serious economic loss and caused considerations whether or not it would be feasible to organize the 1973 meeting.
A mere 2500 spectators went through the turnstiles. Was this unsatisfactory,  instead the club could have the joy of welcoming no less than 21 riders in the 500 cc. special class.

In the 500 cc. sidecar class a protest was filed against Erik Bob Jensen, arguing that his engines cylinder volume was too big.
A measurement after the meeting stated that it was not, and hence the victory was OK.

In 1973 The Danish Long track championships got ridden on Aalborg Trotting track.