A year later on September 21. 1946 the club arranged the opening meeting on the track located in a beautifully area at Boeghoved in the northwestern outskirt of Haderslev town. It was planned to have two meetings per year. The tall hillsides surrounding the track offered excellent overview for the public.

The track in 1946. No safety fence surrounded the track.
The fans sat safely high on the hillsides.
Later a fence got erected.

In November the same year in Haderslev a boy child was born who some years later should become a benchmark in Danish Speedway. He was given the christian name Ole Bjarne Olsen.

In the book “License to win” by the Danish journalist Dan Philipsen Ole tells that he together with some other young boys from Haderslev volunteered as helping hands at the preparations of the track areas ahead of the meetings. Among other jobs they had to remove manure from the cows that used to be grazing on the green areas between the meetings. Such efforts usually got paid with free tickets to the meeting. Ole loved to be at the track. No doubt this period of time strongly contributed to maximize his interest in and strong will to his fantastic speedway career which a. o. brought him the first ever speedway World Championship to Denmark, followed by much more.

It was not this track that staged Ole Olsen’s official debut as a speedway rider, but the Lovel track near Viborg.

The terrain where the track was located was and still is quite hilly, and the track was not quite level. On the back straight there was a low hill, by the riders called “the first floor”. A speedy climb could cause the bikes to leap over the peak.

Sidecars fiercely fighting uphill on the back straight. As it can be seen,
clouds of dust were common then.

From the very first days gating was controlled by a flag marshal, later a rubber string was used until finally a real start grind got installed. 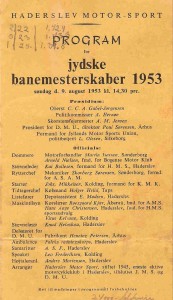 Borge Morch with the laurels

The sidecar pilot Hans Nielsen, Haderslev.
Despite a permanently disabled leg he was a fine rider.. 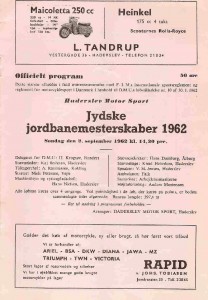 *) In a match report in MotorBladet from October 1962 is Poul Aarup listed as winner of 500 cc. standard, but a filled in programme from the same meeting has Kresten Aarup  as winner, and Poul Aarup is not in the starting list.

In 1966 Kurt W. Petersen from Ringsted won the
20 years jubilee meeting at Boeghoved.

In 1967 Haderslev Motor Sport officially opened the track at Skovby 10 miles southwest of Haderslev. That ended the 21 years long era of the Boeghoved track. The track got demolished. At the same Address today you will find Haderslev Golf Course where green No. 11 is located on the same ”first floor” as mentioned above.

If you posses any informations, stories, pictures or other material regarding this track,
you kindly would make available for this website, Please do so by proceeding
to the contact page or by using the e-mail address: sk@speedwaylife.com
Thank you very much in advance.