See & Hear is in Denmark a well known weekly magazine, that came to the world as a survey over radio- and television programmes.
Swiftly it developed with articles and features about celebrities, often from an angle that could be both controversial and at the same time popular in wider circles.

When Ole Olsen opened Vojens Speedway he was with his World Championship a celebrity himself and a hot name, who fitted well into the See & Hear segment.
Therefore he got closely followed by the magazine’s Jutland editor Christian Askov, and that got developed to a cooperation about a series of meetings on the track i Vojens.
Thanks to the the magazine’s opulent sponsorship, great prize money attracted riders from the world’s speedway elite, and thus also a great number of spectators.

The dates for the meetings got carefully chosen, so every meeting could be some sort of revenge after the respective year’s World Championship final.

In 1997 time came up for one of Denmark’s greatest, but also most unlucky riders, Tommy Knudsen to say goodbye, and the See & Hear meeting should be his farewell meeting.
Almost symptomatic it did not be the success, he had hoped for.

It is said, that it always is raining in Vojens. Despite that only few meetings have been cancelled, but this night i rained as heavy as seldom seen.
After heat 9 heaven and earth was in one and the track soaked in water, No riding was possible.
If mother nature was weeping over Tommy’s farewell to the sport, she might as well have been waiting a few hours. 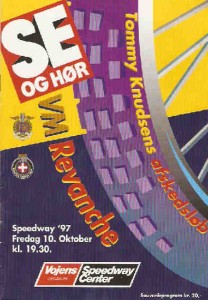