The meeting opened with two attempts for the track record, both successfully. The Swede Evert “Kumla” Fransson’s record on 1,19,5 got lowered first by Aage Andersen’s time 1,19,1 and finally Orla Knudsen rode in 1,17,0 and became record holder. 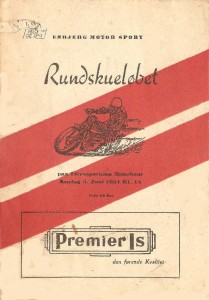 A cover from one of the earlier programmes
(not the first) from Esbjerg Stadium.
Sunday June 5.1951.

24. April 1955:
The weather was not with Esbjerg in the days before the meeting, and definitely not on the day either.
So the track was wet and heavy, but nevertheless the meeting got absolved. 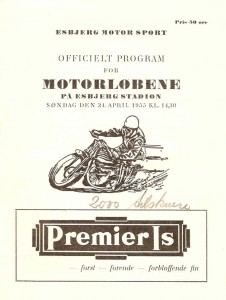 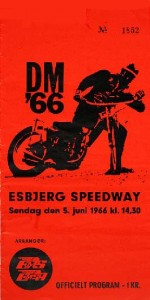 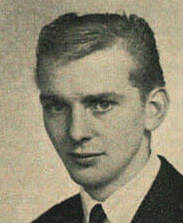 The Danish team tournaments began after a break again in 1967, and the years final was ridden at the Stadium, where the home team – The Vikings -won the first Team Championship.
At the samme meeting the Danish Junior Championship was staged.
Bent Norregaard Jensen won the first individual title for Esbjerg Motor Sport

Bent Norregaard Jensen and Kristian Praestbro were those day’s hot names in EMS , and the club’s riders rode successfully all over Europe. 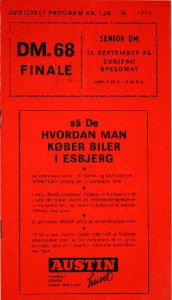 From early morning the rain poured heavily down and a cancellation was imminent. Anyhow a gigantic effort with pumps, shovels and anything able to soak water solved most of the problems. A weather improvement and a fresh wind along the track helped enough to allow the meeting to begin, and by and by the track got still better.

Godtfred Andreasen passing Erik Groen and
and Jorn Mogensen outside in heat 17. 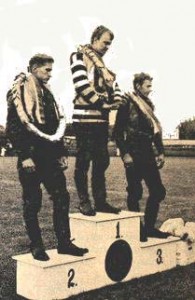 Ole Olsen on the podium between
Bent N. Jensen and Kurt Boegh.

After re-building of the Korskro finished in 1969 the speedway meetings returned to there.