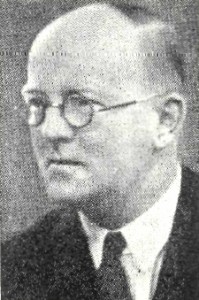 The dominant field of interest was road motoring, but a law from 1932 banned such competitions on public roads.
Co-founder of the club and chairman from 1938 to 1950 was Niels Kristian Pedersen from Hilleröd town. From 1919 he had been an active rider himself. Later he took up organization work, a career he finalized as president of the Danish Motor Union. 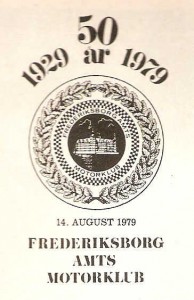 FAM vividly supported more kinds of motorcycle and car competitions. In speedway the main activity from 1954 to 1985 were the meetings on Selskov Stadium in Hilleröd. The club organized the Gold Bar races on Charlottenlund Trotting track from 1959 to 1976 and in 1977 on Selskov. Further together with boxing promoter Mogens Palle the club arranged an extra Gold Bar race at Charlottenlund in 1983. Also an ice race on the frozen lake at Frederiksborg Castle got added to the list.

At Selskov those days’ best national and international meetings displayed a brilliant image for the club, but behind the facade problems lurked. FAM had several members riding in the national tournaments. Some of the matches got staged at Selskov, but strict limitation in riding hours there made the need for more practice time imminent.

The solution was found near the smaller town Slangerup in a damp area adjacent to the Graese creek, where a practice track could be built. The track opened early in the 70-es and was from 1976 home track for FAM’s speedway teams, ”Kulsvierne” (the Charcoalers), ”Drabanterne” (The Guardsmen) and ”Skovtroldene” (The Forest Trolls). Like many other tracks this track had a safety fence made of discarded car tyres. Later a wooden safety fence got erected, which few years ago got replaced by an impact absorbing fence.

Unfortunately, on Saturday October 2. the speedway rider Stig Larsson lost his life in an accident while practicing on the track.

A moped speedway track got added and opened on May 22. 1977. The team ”Gasserne” joined the moped speedway tournament, and made it in 1978 to a second place in group 1, but lost the semi final and missed the year’s final. 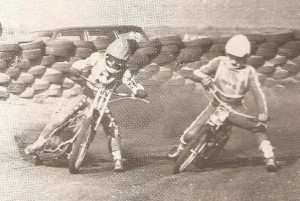 On the moped track 1979, René Mortensen (FAM)
outside is passing Per Jensen (FMK).. 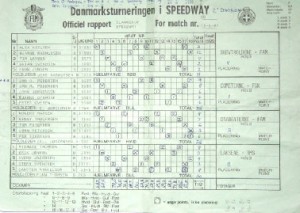 May 2. 1982  DK-S Team meeting FAM – Gnistorna Malmoe
The club from Malmoe, Sweden ”Tändstiftet” ( Swedish for spark plug) visited Slangerup with their 500 cc. team named ”Gnistorna” (Swedish for sparks) for a friendly match against a FAM team mixed riders from Kulsvierne and Drabanterne occasionally named ”Kuldrabantsvierne ” (the Charguardsmencoalers). The Dane Per Pedersen, living in Sweden, scored 14 points for his team, and a young Swedish girl, Lennie Ivarsson, with only one year of speedway experience rode very well. For FAM Kurt Hansen and Per Sorensen both scored 13points.
Result: 1. Slangerup 60 points. 2. Malmoe 36 points. 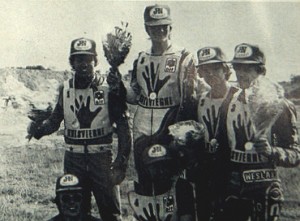 The team Champions with their gold medals.

1983 also was the year when FAM opened an Old boys branch with a set of rules, which without being today’s rulebook, still is a basic part of it.

August 6. 1983. Mini speedway Championship of Zealand.
This championship , run first time on Slangerup Speedway left no doubt about, which club would boast of the champion after the meeting. In fact only riders from FAM participated. Anyway the boys had a tough fight, from which young Henrik H. Hansen came out the best. 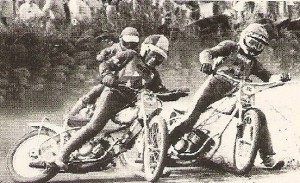 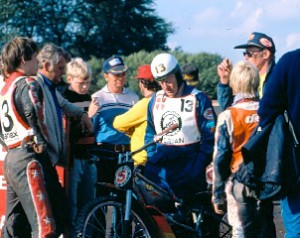 79 years old Morian Hansen rode a few show laps
with the famous No. 13, and after the final heat he
presented the medals to the winners. 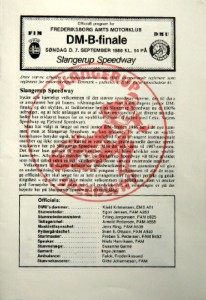 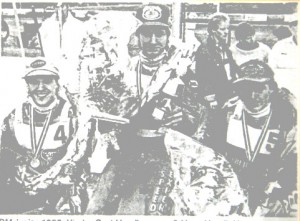 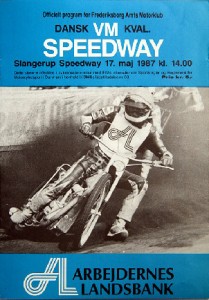 *) Jan Jacobsen replaced injured Jan O. Petersen, who subsequently got nominated on the last of the 7 places available for Denmark.

Danish top scorers were Henrik Kristensen, Esbjerg and Per Sørensen, FAM, both 11points. A final superheat with 6 riders was won by the Hungarian Lazlo Bodi. The day before a similar meeting at Amager Speedway was won by Denmark 1.

Lazlo Bodi leads the pack in the super 6-man heat. 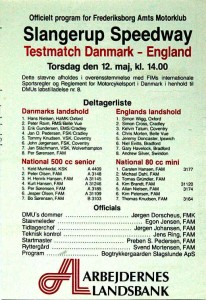 1989
Before season opening 1989 the FAM team was on tour in England riding in friendly meetings against Hackney, Arena Essex, Eastbourne and Poole. The team lost every match but got most valuable practice.

1 to 8 further to next round in Mariestad, Sweden, no. 9 reserve. 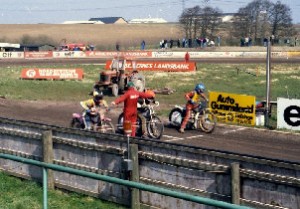 The riders in the race-off for 8th place ready at the gates.

August 2. 1989. 500 cc Danish Championship final:
This meeting also celebrated FAM’s 60 years anniversary. Heavy rain lasted up to the opening, but the track was so well prepared that Erik Gundersen with 59, 7 seconds rode a new track record in heat 2. Although it was an ordinary workday’s evening, a crowd of 4000 fans attended the meeting.

This was the first day of a 2-days meeting. Second day was next day on Amager (see Amager CPH)

1991. On FAM’s general assembly the sectioneering in the club organization got discarded. The former speedway section re-emerged as a separate club named Slangerup Speedway Klub. The club’s teams continued as usual, now under the club initials SSK. 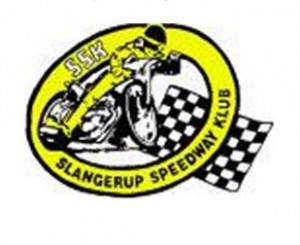 The league team announced having signed a contract with American Sam Ermolenko as captain. 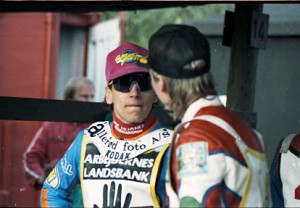 Sam Ermolenko and Greg Hancock having a chat in the pit.

2002:
SSK received a ban warning from Frederiksborg County, ordering that for environmental reasons the pits should be re-built. This initiated a major construction task resulting in a new building with pits for both tracks under roof.

Slangerup speedway with the new pit and a yellow safety fence. 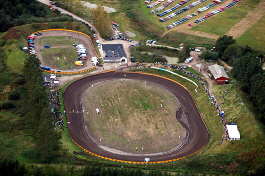 Slangerup Speedway from another angle

Slangerup in the Danish Speedway League. 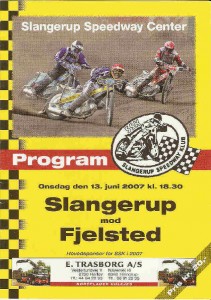 FAM/SSK is the only Danish team having participated uninterruptedly in all years Danish Speedway League.

See video from the meeting. 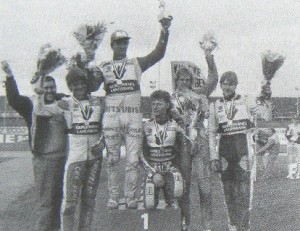 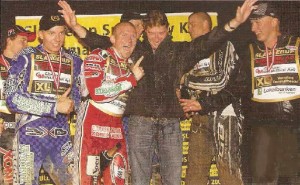 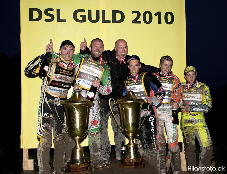