Haderslev Motor Sport got founded on June 7th 1945 with Kaj Boilesen as chairman.
The objective was to organize racing meetings for motorcycles, cars and speedway bikes.
The club opened in 1946 the Boeghoved track (see this) and ran it until the closing in 1967.
Then the decision was taken to build a new track at Skovby 8 miles south west of the greater town Haderslev.
Some years before the club had produced plans for this project, but the permissions required had not been given until 1966. The work began in 1967 and the track was ready for opening on April 13.1969.

The track is a part of a greater Motorcycle sports complex also including trails for micro cross and for adults. 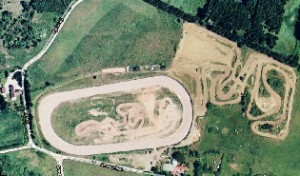 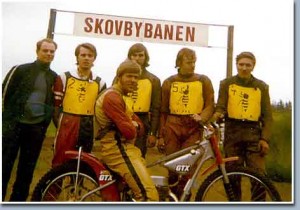 A team of riders in front of the entrance

April 13.1969. opening meeting:
Despite cold weather many spectators came to see a fine selection of international riders spearheaded by the world champion Ivan Mauger from New Zealand, Hans Zierk from Germany and Uno Andersson from Sweden.
The local riders were Ole Olsen, Bent Norregard Jensen and Preben Moller Christensen.
Ole Olsen sat the first track record, but it was Preben Moller Christensen who won the class.
The Junior special class was won by Erik Tillgaard from Haderslev ahead of Frank Jahn from Herning.

The sidecarclass was after a fierce fight won by Kurt & Leif Larsen in front of H. C. Callesen & Erik Skovshoved with Günther Bommé & Lauritz Wind in third place. 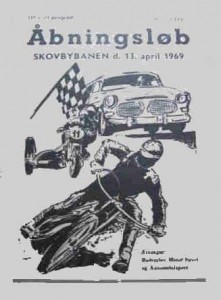 Programme from the opening meeting.

The track has had a turbulent life. It has been closed a few times, and its appearance has been changed. The recent track appears as an old fashioned soil track with its length, surface and safety fence built with old earth filled car tires very similar to the – since many years closed  – Fangel track. 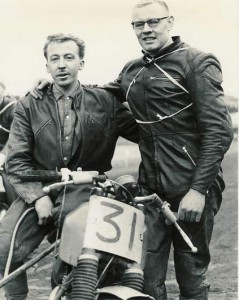 The club suffered a loss of members early in the 70-es and seized its activities for a period of time, but came back in 1975 organizing the international “SPETRA Ltd” meeting attended by approx. 13.000 fans watching Ole Olsen, who until then was undefeated at Skovby, being defeated by the World Champion Egon Müller from Germany .

October 10. 1971. International meeting.
After Ole Olsen’s Speedway World Champions brought home from Wembley it was obvious that Haderslev Motor Sport would give their fellow citizen a presentation on home ground at Skovby.
Realizing that Olsen most likely would be too strong for most of the Danish riders, they rushed to engage some riders, who were able to yield qualified resistence.
They manged to collect an expert class with the 1000 m. World Champion Ivan Mauger from New Zealand, Willihardt Thomsson from Sweden and the best Danes, among them Preben Moller Christensen, Bjarne Nygaard and Arne Andreasen to meet Ole.
Late as it was in the year, the track was wet and slippery, but that didn’t affect great champions.
Ole Olsen and Ivan Mauger fought far ahead of the others so close side by side, that the aggregate times for four heats ridden differed by only 0,2 second.
After the last heat both could display almost clean leather suits in contrast to all the others i who were much covered with mud.
In the sidecar class a  nasty crash  sent both the pilot Peter Skovby and passenger Per Jorgensen to hospital with injuries.

April 15. & 16.  1972, “Fuglsang meeting”
Fuglsang (Birds singing) is the name of the local brewery in Haderslev, sponsoring  the meeting.
There was a lot more engine noise than birds singing on the Skovby track, where tid meeting got staged with several classes for both motor cycles and cars.
However the latter was, seen with the eyes of the motor cycle riders, not the brightest idea, even it attracted a lot of spectators. The cars simply churned the surface up, so it got more suited for moto cross than for speedway.
That caused some extra crashes and very long time for extra intensive track service.
Alone Ole Olsen was not affected by the track condition and sat with 1,35,8 a new track record for four laps.

April 14. & 15. april 1973, “Fuglsang Meeting”
Caused by last year’s criticism of the track Haderslev Motor Sport had done an immense piece of work to give the track a new base to stabilize it. Unfortunately the top dressing had not have time enough to settle and still was somewhat loose. 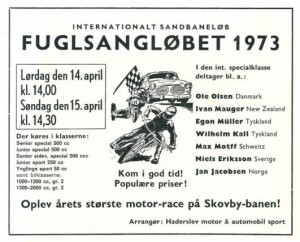 As can be seen from the above advertising, the club had engaged some really strong riders in the expert class and got rewarded with about 10.000 spectators of which several came from Germany in tourist coaches.

April 21. 1974. International Meeting, “Spetra Meeting:
Earlier years criticism of the track was totally muted. About 200 tons cinders had stabilized the track so much, that the foregoing years many crash got saved.
Once again had a crowd of 10.000 fans found their way to the track to witness that Ole Olsen still was unbeatable despite the strong international competition.
The German sidecar pair Wolfgang Marx and Schütt contributed to the entertainment, when the latter fell of the sidecar. Marx turned quickly around and picked him up again and finished, unfortunately only to be disqualified for illegally crossing the infield line during the turn. 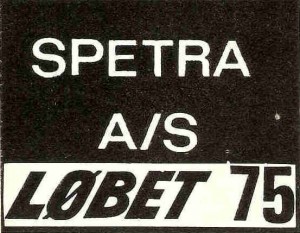 A crowd of about 13.000 watched Ole Olsen, until then undefeated on Skovby, being defeated by the World Champion Egon Müller. 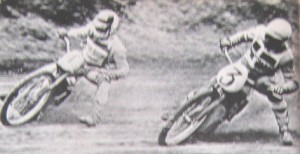 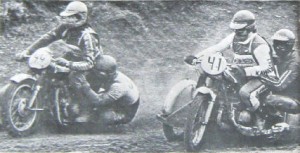 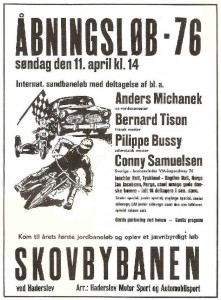 The Seasons opening meeting 1976 had an excellent line up headed by former World Champion Anders Michanek from Sweden, followed by his fellow citizen the new bronze medal winner Conny Samuelson, the French Champion Bernard Tison and Swiss Champion Philippe Bussy. Further came Joachim Kall from Germany and the Norwegians Dagfinn Dall and Jan Jacobsen.
A mini speedway class was included in the programme. see below. 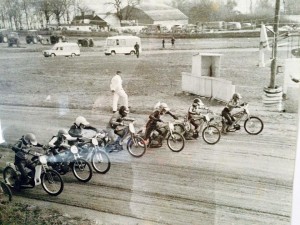 At the gates, from inside Tommy Knudsen, Per Roth,
Peter Christensen and Erik Holm, Unfortunately
we don’t have the names on the rest af the field.

Also a qualification for the Danish Championship in junior sidecar 500 cc. was in the programme, and here an accident occurred which threw a dark shadow over the meeting.

In heat 11 a sidecar vehicle came too close to the safety fence. In the correction attempt it came across the track and got hit by 3 following machines. In a split second 4 motorcycles and 8 men tumbled around. When the dust settled 7 of them stood on the track, but the sidecar passenger Niels Thornoe lay unconscious on the track. He got rushed to hospital in Haderslev where he died shortly after arrival.
When the sad news came to the track, all flags went on half mast, 2 minutes silence got observed and the spectators silently left the track.
The achieved points in the class got cancelled. 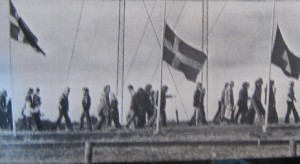 Silently the spectators left the track after the accident.

Then the track lay idle for 2 years until June 11. 1978 when a meeting solely for Danish riders in the classes 500 cc. special, 500 cc junior and senior sidecars got staged. (No results are listed).

The track got in 1982 converted to a grass track and a great meeting got scheduled for June 12. 1983. However this got cancelled, and a practice session got organized to compensate.Later the track returned to the original soil surface. However nothing essential happened before 1985

April 13. & 14. 1985, 2-days international Practice session:
There was participation from Norway, Sweden, Germany and of course Denmark. The track was wet and slippery on Saturday, but dried up and got very fine for the Sunday’s final race.

Then the track lay idle until August 16. 1987, where a greater meeting was announced, but got cancelled.
The same happened to a meeting scheduled for August 12. 1988.
In the weekend April 1st and 2nd. 1990 a long track Practice meeting got absolved with many riders  in various categories.

These two long track championships  are the very last to find on the list of official Danish Championships. As no Championship got absolved in 1990, the above clearly describes the deroute of the long track sport, as well with the number of active riders,  as well as the Skovby track being the only long track available.

8.& 9. June 1996, international meeting:
Riders from 6 nations Denmark inclusive gathered and rode in the classes solo, sidecars and quad racers.
Saturday was saved for practice and qualifying for the finals on Sunday.

Up to the Millennium not much happened on the track, but still there was good activity in moto cross.

Early in the 2000-s several attempts were made to revive the old track. The safety conditions got improved, however the old wall with soil-filled car tires still was kept. Also a new referee’s tower was erected.

August 10. 2003:
After a longer break a newly inspected and accepted the Skovby track once again invited to a greater meeting for long track- and speedway riders. In short, good old fashioned motor racing with room for everybody.

April 2. & 3. 2005:
Again the club invited to a great practice session in  various classes, but no results have been published.

21.august 2005, Meeting for Oldies:
We have borrowed a couple of pictures from Motorbladet

The sidecars are gating 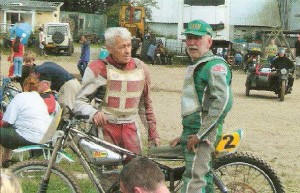 Oldies but goodies: Peder Jensen (left) in a chat with Norwegian
Jan Johansen in a break in the pits.

Many times the Skovby long track has been declared closed and gone, but this has never been true.
It is still there and regularly used for practice sessions for the few remaining long track riders and  Classic sidecars.
Its future is uncertain, especially in view of new regulations and stricter requirements for facilities and equipment.
In an attempt to modernize track, the old tire wall is recently discarded and a new wooden safety fence erected. 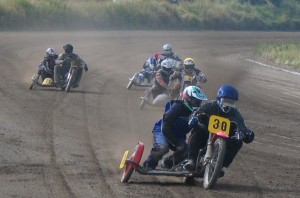 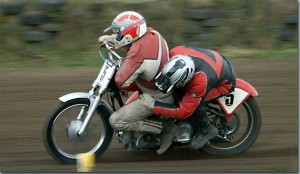 A fine series of pictures from the Skovby track.
How long will it still exist?