The town Loegstoer is located on the coast of the Limfjord west of the Aalborg, where the narrow fjord widens to a large pool. It was first described around 1500 as a homestead for sailors and fishermen. Today the town has a population of 4.300, and is known for sea food production like mussels and oisters and an industry producing tubes for district heating.
Early in the 1950-es a motor club was active and in 1957 opened a speedway at route 567 east of the town where the arrow points on the map above.

A satellite view of the main Road to Aalborg, route 567  between Loegstoer
and the village Kornum. The oval symbol represents the location of the speedway,
of which no trace is left. The area is now utilised for maize cultivation.

July 28. 1957, Opening meeting:
A Motor magazine wrote in the September 1957 issue. that the new Motorklub of Loegstoer and vicinity’s sholud be admired for with very few members in a short time having built this beautifully situated track, which had been a lot of work. As a newly laid track it obviously was quite soft, and  towards the end of the meeting became very rutted resulting in a few crashes which, among others hit  Soren Juul and Niels Moller from Viborg. 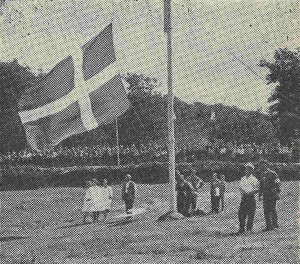 Loegstoer Municipality’s big flag being hoisted over the track at the opening. 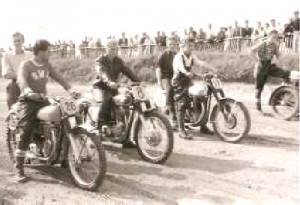 2500 spectators expected a good meeting with exciting heats and fine riders. Unfortunately, the track surface was not prepared to deliver its part of the show. It simply  too soon got plowed up  and required from solo riders more brinkmanship than speed.

It was in particular the sidecar bikes that made the track rutted, and the track service did not have the means to solve the problem. After all, the meeting got finished with some engine failures and a few crashes, one of which hit the only local rider, Johannes Nielsen, who despite a fine performance as the day’s fastest rider lost his winning chance. 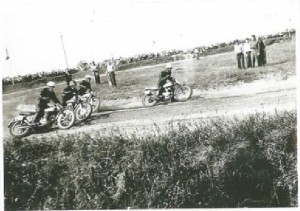 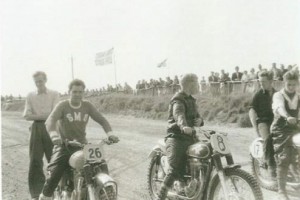 Riders are from left; No. 26 Preben Bollerup, Silkeborg.
No. 8 Henning Christensen, Frederikshavn and No. 17
Peder Soby from Randers.

August 31. 1958
A planned meeting according to this year’s speedway calendar.
Unfortunately, it has not been possible to find a list of results from there.
From local sources we have been told, that the track did not get a long life, We have searched calendars and result lists from 1958, 1959 and 1960 without being able to find anything that would indicate later meetings on Loegstoer  speedway, and must assume that above meeting was the last.