Re-written in September 2016, based on info from Frank Larsen, Aalborg.

Located in the North Jutland region, Thisted town at the northern coast of the Limfjord has been a human settlement since the stoneage, where hunters and fishermen could live, protected from the North Sea.
Already around year 600 the place got named after the asagod Tyr or Tir (Thyrstadt).
It got its borrough rights from King Christian 2. In 1866 the first Coop in Denmark emerged in Thisted.
Now Thisted mainly earns its income from various Nutrition industries and their support industries, but also has a harbour for coaster traffic and is a popular holiday resort. 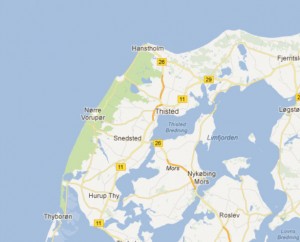 The club Thy Motor Sport ran from approximately 1947 -53 a speedway located 2,5 miles west of Thisted in the same area as the cattle show ground. The track appears not to have been a permanent one, but has been laid for occasional meetings with length varying from 400 to 475 meters.

Opening meeting 1947:
(Date is not remembered.)
Despite heavy rain that made the track very slippery and difficult på ride, Thy Motor Sport got a fine debut.
A few crashes occurred, but no person got injured.
Results: Solo under 350 cc:
1. Peter Jacobsen,          Aalborg
2. Victor Simonsen,         Aalborg

June 13. 1948, Evening meeting:
There was an audience of about 6000 to an evening meeting with 50 riders from Thy Motor Sport, Skive, North Jutland Motor Sport (NMS) i Aalborg, Herning og Hjorring.
A sidecar crashed in a test ride. The pilot hit his head and got unconscious. He got taken to the local hospital.
The meeting got delayed until the ambulance returned to the track.
Because some riders did not make it to the track in due time, because they earlier on the day had ridden in a meeting in Skive, some changes in the programme were needed.
Results:
Rookies:
1. Hans Sondergaard,    Thy.
2. Hans Chr. Juhler,        Thy.
3. Peter Vangsgaard,      Thy.

We have no record of track meetings in 1949.
But we have info of a well attended hill climb the club organized on the Island Mors with 30 riders in various classes.

September 10th. 1950:
The members of the club had made an excellent piece of work with the  track, and the 39 riders, who were present, were happy with it.
And so were also 5000 spectators, who also were satisfied with the organization and the well ridden heats.
Almost compulsory it rained in the morning, but the track was dry during the meeting and improved along the day.
The only incident was a crash that hit the senior rider Christian Dahl from Randers, who came under his bike.
He escaped with a few scratches, but was too shaken to continue.
According to the Motor Book from 1951 Aksel Jensen from Aalborg rode a track record in this meeting, but the time is not given.

September 2nd. 1951:
Obviously it always rained when Thy Motor Klub had meetings, so also this day.
But the audience had fun, when the riders “sailed” through the bends and from time to time tumbled around at the safety fence or simply slipped amid the track.
But nobody got hurt.
Despite the rain more than 4000 people came through the turnstiles, so Thy Motor Sport was happy with the entrance fee.
Results:
Rookies:
1. Hans Gaarn Poulsen, Silkeborg.
2. Knud Norgaard,           Thy Motor Sport.

August 3rd. 1952:
Sunday morning came with a monsoon like rain as habit is in Thisted.
But after few hours the weather cleared up, and at 2 pm the track was good, and near the end it began dusting.
An audience of 4000 watched a good meeting with only 3 crashes and no one got hurt.
Results:
Rookies:
1. Anders Hangaard,      Thy Motor Sport.

August 23rd. 1953:
An audience of 3000 and 38 participants was not enough to save the organizer a healthy economic plus.
However the meeting showed good sport and many fine heats, although the track was somewhat challenging for the riders after rain in the morning and caused a few crashes, of which one hit Svend Larsen from Stenlose so hard, that he could not ride in the final heat.
The weather kept dry during the meeting.
Results:
Rookies:
1. Gunnar Pleth,              Thy Motor Sport.
2. Anders Hangaard,      Thy Motor Sport.
3. Vagn Stevnhoved,      Aarhus.

There are no reports found from the track in 1954, so we must assume, that 1953 was the last season 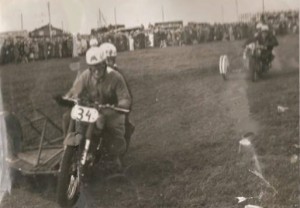 From the last meeting in Thisted. In front sidecar No. 34 with Harry Pedersen and
Gunnar Williams from Aarhus, behind Henrik Pedersen and John Lindeberg from Holstebro.
The track looks almost like a grass track.
(Picture recieved from John Williams).