Sources:
Sport i Verdensformat by Allan Terndrup,
Illustreret Motor revy.
Herning Folkeblad 12/8 1946
John Williams, Aarhus.
Motorsportens Mænd 1947.
The Manor Herningholm which has it’s origin around 1580 and a re-build in 1757 is nowadays a part of Herning Museum. The restored main building now frames a collection left by the late author Steen Steensen Blicher. Apart from the park all land around the manor has been developed to residential areas, but in the years shortly after WW2 still many acres of farm land surrounded the manor house. Here Herning Motor Sport (founded 1937) had a 500 m. long grass/earth track for motor cycle racing.

The very first meeting in Herning was organized by Herning Motor Sport with 65 participants and an audience of nearly 10.000 spectators.
There was many dramatic incidents,  but only one with injury. The rider Svend Larsen from Roskilde crashed in front of In the senior class in front of  Ove Pedersen from Aalborg, who could not avoid to hit him and crashed too. Behind themcame Jeppe Ussing from Vejle, who avoided an imminent collison by clashing his bike down.
Svend Larsen got hopitalized with a broken leg.
Results:
Rookies solo:
1.  O. Kristensen, Kolding:
2. Kaj Jacobsen, Aalborg,
3. Aage F. Andersen, Horsens.

In the book “Sport I Verdensformat” (Worldwide sports) is written, that a number of meetings were held on this track. But only one meeting – the Jutland’s Championship on August 31st 1947 – has been reported.

40 riders competed in more solo- and sidecar classes. Like many other contemporary tracks the surface of this track was nothing but soil from which the grass was scraped away.
The pictures show that it got rutted and bumpy and caused some dramatic incidents and falls, but no one got seriously hurt.
In the 500 cc Standard class both Knud Nielsen from Aarhus and Borge Morch from Kolding crashed, more annoying for the latter who in his first heat rode a record time of 2,05,6 minutes, making him the greatest favorite.

The sidecar pilot Jens Nielsen from Silkeborg in a collision with a competitor took a flying salto mortale. Without rider and passenger his vehicle landed on the wheels and with the engine still roaring continued over the infield until it ran into a hole.

A great surprise was the rookie J. P. Nielsen from Herning, who  took second place in the sidecar class under 600 cc.

Very close racing in most of the classes got clearly expressed through the winning times who mostly got separated only by fractions of seconds. 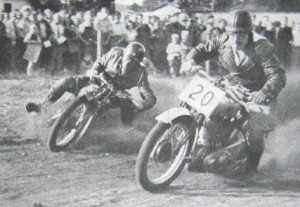 Borge Petersen in trouble attempting to pass Kurt Lauritsen on the outside. 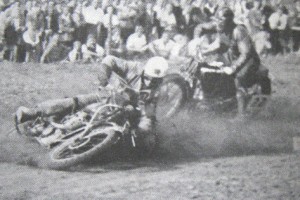 Sorensen falling off in front of Borge Petersen, who escapes him by a whisker. 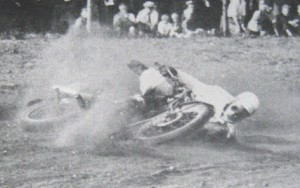 Erik Bach from Vejle also had to go down. 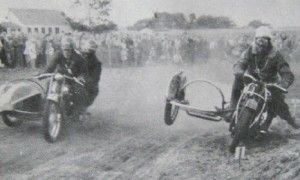 The Sidecars provided drama. Here Orla Nielsen too close to the infield. 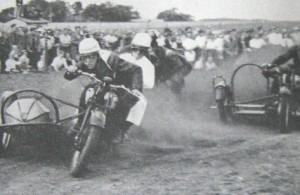 Kresten Kristensen from Aarhus with a firm grip in
the handlebar entering a bend at full throttle. 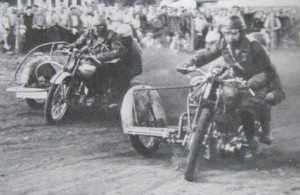 Rasmus Kornum in an attempt to outside overtaking. 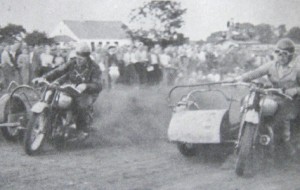 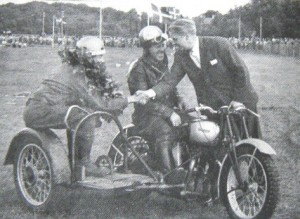