The closing of the Fangel track left the Sports Motor club Odin homeless. The municipality of Odense had great troubles in finding an area, where a speedway track could be allowed without violating the environmental regulations with respect to the adjacent residential areas.

However the club was not only a motor club, but also a club for youngsters from socially threatened areas particularly in the eastern part of the city. Therefore the municipality had an interest in accommodating the club and finally succeeded in finding a site along the Lindved stream in an industrial zone in the eastern outskirt of the Korslokke district, from which the track has taken its name.

Air view of the Korslokke track.

On the site the municipality built a modern speedway stadium, however limited in size by the triangular area between the Lindved stream, the Nyborgvej and Teglverksvej. In accordance with the city council’s interest in the social work done by the club, the dimensions were well suited for a speedway track for 50 cc. and 85 cc, and as such the track has proven excellent.

Actually the track is wide enough both on straights and bends to make 500 cc riding possible, but there has never been given permission for that.

Although the track is placed in an industrial zone, complaints over the noise have been lodged anyway. That is remedied by the building of an 8 meter high noise screen surrounding most of the track. Somewhat ironically members of the club are joking, that now the noise from trains passing by on the railway just opposite the street will not bother the riders.

Besides the scheduled matches in the Danish tournaments a number of interesting meetings have been staged on the track.
Here just a couple to mention.

11/7 1987  Danish – Swedish Nations match for 80 cc teams.
The weather was – with a light understatement – wet. It rained cats and dogs all the day. But the track stayed firm and the surface gave sufficient grip for racing. The Swedish team felt like fish in water, while the Danes disliked riding behind with goggles filled with water. In fact the Danes didn’t even get a heat win in a re-run after the two Swedes both fell in a collision.
The next day things improved substantially for the Danes, but that was on the Vejlby track at Fredericia in dry weather.
The meeting was the third leg of four, two in Sweden and two in Denmark

August 18. 1996, Danish 80 cc Championship final:
A brilliantly organized meeting with won  by Henning Bager with 14 points ahead of Peter Ole Andersen and Michael Christensen with 12 points each after race off.

In 2011 the old pit got demolished and a new spacious one got built. At the same time a steel bridge got built allowing spectators to reach the terraces at the back straight.witout having to cross the lane between pit and track and the service way for tractors and water tanker. A substantial safety improvement for riders as well as for the public.

The track got re-inaugurated at the first micro speedway meeting in 2011 by the Mayor of Odense, Mr. Anker Boye. 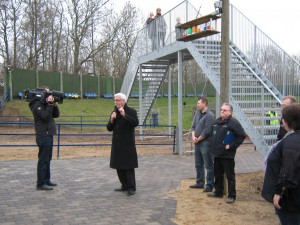 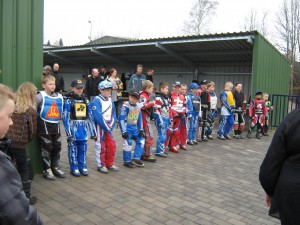 The Micro riders and their parents listening to the Mayor in the new pit. 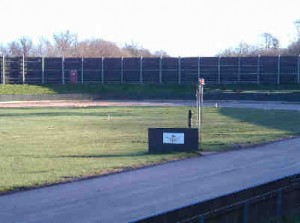 The referee’s box. Note the tall noise wall behind- 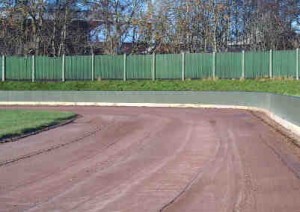 The wide straights and bends invite to overtakings

The club house with terrace and a playground for younger children.

Through many years, back from the days with the Fangel track, SMO were lodged in a brick house in downtown Odense. This was not ideally when having the  new track distant and regular practice evenings there twice per week. Instead the municipality acquired the house for a soccer club, and a new wooden club house with kitchen, cafeteria, toilets and locker room got erected at trackside, so the club could collect all its activities in one place.