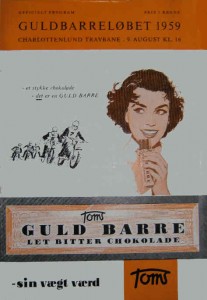 On August 9. 1959 the series “The Gold bar meetings” sponsored by the Chocolate company TOM’s Factories Ltd.  had its first meeting on Charlottenlund Trotting Track.

The prize, that should be won three times to become property, was a genuine gold bar with a value of DKK 85.000, shaped as a model of the chocolate bar, which gave the meetings it name.

in 1965 the company also donated the below pictured coffee set with a value of 10.000 DKK to the Associated Motor Clubs’s Track Foundation.
The set, that was designed by Sigvard Bernadotte and made by Georg Jensen’s silver forge in Copenhagen, should likewise be won in the 500 cc. Expert class three times to become the winner’s property. First time in 1966.
It caused some knife sharp fights between Kurt W. Petersen and the Swedish rider Björn Knutsson, before the set in 1970 finally got won by Kurt W. Petersen.

The Gold bar meetings stayed in Charlottenlund until 1976, and got in 1977 transferred to Selskov Speedway. In 1978 it got absolved on the Korskro track by Esbjerg.

There was no Gold bar meeting in 1979, but from 1980 to 2000 the meetings became a firm annual tradition on Vojens Speedway.

In 1983 and 1984 the Gold bar meetings returned to Charlottenlund.
In 1983 the Boxing promoter Mogens Palle embarked in a cooperation with Amager Motor cycle club, Frederiksborg Amts Motor club og Mid Zealand’s Motor club about the meeting, that got absolved as an evening race in floodlight.

Prior to this there was great discussion in the newspapers about, how a boxing promoter at all could be accepted as organizer of a motor race. Maybe the negative attitude in the discussion was the reason why the number of spectators did not exceed 2.500.

Mogens Palle tried again in 1984, This time with Amager Motor cycle club as organizer. To strengthen the interest, the Gold bar race was run parallel with a team competition between 6 nation’s teams and a selected team.

These meetings were extras, as the ordinary Gold bar meetings also were held.
There was no further attempt with meetings in Charlottenlund.

The race format has sometimes been changed. From 1959 to 1976 it was a long track race with initial heats, intermediate- and repercharge heats up to a final with  8 riders.

In 1977 the meeting on Selskov Speedway was a traditional speedway race with 16 riders and a winner on points after 20 heat.
On Korskro in 1978 the long track format was used.
In Vojens again the 20 heat format was in use with the addition, that a final over 6 laps with 6 or 8 riders was deciding.
Once the final got cancelled due to rain, and once the meeting got postponed a few days for the same reason.