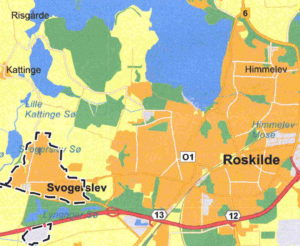 Roskilde & Vicinity Motor Club (ROM) opened a grass track at a location named Svogerslev near Roskilde  (se the map) on 9 July 1933 in fantastic summer weather, which was almost too good, because sun and heat attracted people to the beach instead of going to the motor race.
The total audience rate was only around 2000.

The club had collected a nice number of the country’s best riders, and had secured the assistance of experienced people from the Sports Motor Club to complete the race.

In the first race, one of ROM’s own riders Gunnar Nielsen from Lejre was unskilled enough to win in front of Holm Madsen and Leif Hirsborg.

Third race was a junior race for 500 cc bikes, won by Brinkmann Jorgensen in front of Svend Nielsen and Ivan Nielsen.

In the expert class for 500 cc. was Svend Aage Engstrom favorite but he got engine failure, and then the race was won by Henry Jorgensen with Sejr Dybbro and Agner Hansen in the next places.

A handicap heat was won by Gunnar Nielsen in front of Ferdinand Olsen and Leif Hirsborg.

A sidecar race had only two participants. But then one, Oluf Hansen got a puncture, so the other, Th. Bengtsen got an easy game.

The meeting ended with a car race, which H. O. Rasmussen won in front of Arnold Jensen and Knud Tholstrup.

This is the only meeting from which we have been able to find a report, and hence we conclude, that the track got closed again  same year.

If you posses any information, stories, pictures or other material regarding this track, you kindly would make available for this website, Please do so by proceeding to the contact page or by using the e-mail address: sk@speedwaylife.com
Thank you very much in advance.