Fredericia Motor Klub opened  in 1958 a new speedway for 500 cc. named Vejlby Speedway and used it until 1971 as home track for the Fredericia team in the Danish tournaments and for practicing.
From 1971 the track lay idle a couple of years until it got re-built, shortened and re-opened in 1974 as a track for moped-  or mini speedway as 50 cc speedway also was named. That changed to 80 cc speedway in 1983, and from 1994 Micro speedway entered the same track. 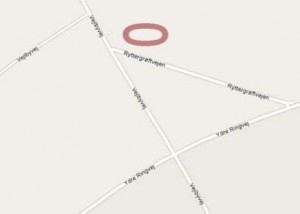 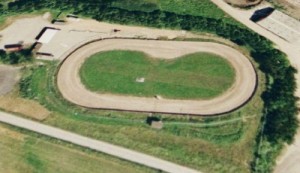 Satellite view from the same place

From the satellite a part of the outline of the earlier 500 cc track can be recognized as a curved line in the terrain from the pit area left though the referee’s box into the trees to the right.

By and by the track got improved with a wooden safety fence and a fence for the public, and in 1984 it got approved by the Danish Motor Union as a public track.
With various modernizing like semi roofing of the pits and in 1993 the erection of a spacious club lodge with toilets, cloak room and cafeteria, it is still the same track hosting both 80cc speedway and microspeedway.

Vejlby Speedway as it looks today, viewed from the pits.

The team ”Landsoldaterne” (The Land Soldiers) emerged first time in the Danish tournament for 50 cc speedway in 1977 and finalized in second place in 2. Divison group B. This however was not enough to reach the B-final in second
division, which got ridden on Vejlby speedway on September 24th with the result below.

Landsoldaterne continued in 1978 in the Danish tournament group 5, while a new team named “Vejlbydrengene” (the Vejlby Boys) entered group 4, and another new team named “6. Juli drengene” (The Boys of July 6th) rode in group 6. This was a substantial progress in only one year.
Landsoldaterne won the team championship that year, and got the first team in 50 cc speedway, to be uniformly dressed in riding suits by a sponsor for the following year’s tournament.

Further in 1979 the team”Brodrengene” (The Bridge Boys), which despite its male name included the female Anette Munkholm, joined.
The Land Soldiers, The Vejlby Boys and The Boys of July 6th continued. Fredericia Motor Klub got two teams Danish Championship final, which got ridden at Munkebo speedway, but the land soldiers had to leave the glory to Fjelsted and settle with silver medals. The Vejlby boys got left on the “first to nothing” fourth place.

Once again in 1981 The Danish Team Championship went to Fredericia. Furthermore Per Lykke Nielsen from The land soldiers could enjoy the glory on top of the ranking list with an impressing average of 11, 56.

Thereafter it lasted until 1987 before the sweet taste of victory reached the fortress town again.

Again a long period of time until year 2000 passed before the next Danish Team Championship went that way, and the again a break until 2004, which gave gold medals in 1. Division and silver in 2. division. Further two Fredericia teams placed themselves respectively as no. 1 and no. 9 in 3. Division. 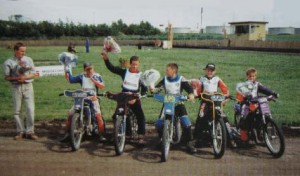 The Land soldiers getting hailed on the Vejlby track for
the Danish 80 cc team Championship 2000.

July 12. 1987. Denmark – Sweden 80 cc Nations match:
This meeting was a part of a nations meeting over 4-days, of which the first 2 was held in Sweden respectively in Mariestad on July 4th and in Västervik on July 5th. Then the following weekend the two last meetings got staged in Denmark. On Saturday July 11, on Korslokke Speedway in Odense the Swedish team took their only win in the series in heavy rain.
Then on Sunday the weather was sunny and Vejlby Speedway showed the very best of itself, at least for the Danish team. The Swedish team got hit by engine failures, falls and exclusions and faced a hopeless defeat.
The municipality of Fredericia presented gifts to all riders in the meeting, and the winners got beautiful cups. 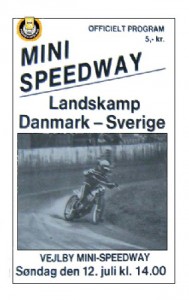 With Danish wins in 3 out of 4 meetings the aggregate score was 231 points to the Danes and 186 point to the Swedes.

August 20. 1995, Danish 80 cc Speedway Championship Final:
In recognition of Fredericia Motor Klub’s 50 years jubilee the Danish Motor Union gave the Final to be staged on Vejlby Speedway. The Club made a fine day of the meeting with a lot of flag on the road to the track and many flower decorations on the track. 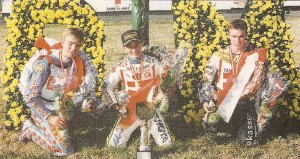 Hans Andersen between Carsten Lauridsen (left) and Thomas Blom-Poulsen
*)If anyone has a better picture, we would be happy for a copy. 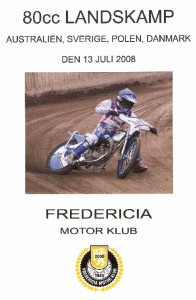 The FIM Championship for young speedway riders aged 12 to 16 years – called Youth Gold Trophy – was staged on Skaerbaek Speedway in Southern Jutland through the week up to Sunday July 13th. An initiative taken by the Danish National youth coach Erik Gundersen made it possible on short notice to arrange a team test match on Vejlby Speedway, while many international riders still stayed in Denmark.

It was good news to see Finland – after through many years having limped behind – being able to participate. Likewise it was exciting to watch the Australian team with the multi talent on motor cycle Arthur Sissis. Unfortunately for Australian speedway he prefers road racing even his speedway riding lacked absolutely nothing. 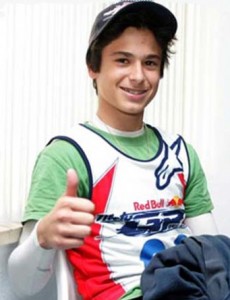 If one should talk about anybody not living up to expectations, it had to be the Poles. Polish speedway has stormed forward on all fronts, except Vejlby. Furthermore they have topped the team with guest rider Kasper Lykke Nielsen from Fredericia. (Son of Per Lykke Nielsen- see 1981) 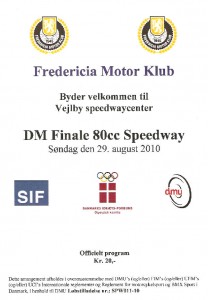