Aabenraa Speedway Club got founded in 1975. The initiator and first chairman was Gert Jensen, owner of Aabenraa Motor Centrum. The following year the Club opened a new speedway located at Kokkelund in Krusaa, close to the Danish – German border.

The 300 meter long bane was designed for 500 cc speedway, not for moped speedway, which usually will be ridden on 200 m. short tracks. However the control board accepted moped speedway on the track provided visitor teams would be allowed practice on the track one hour before every meeting. 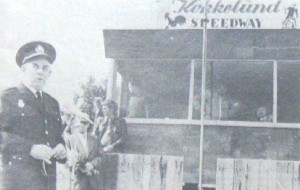 The opening meeting was joined by Billy Sanders, Australia and Hans G. Wilde from Western Germany in the 500 cc special class. Further a class for youngsters on 50 cc mini speedway bikes, all coming from the organizing club rode 4 heats, Afterwards the meeting got described as a sporting success, but a crowd of 2000 fans was not enough to save the economy. 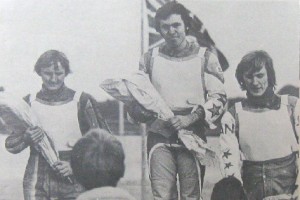 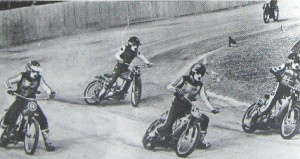 From left. Jens Enemark, Tim Kröger, Palle Stensbjerg and Per Jensen.
The rider in the background is not identified.

An article about the club’s 500 cc rider John Rosenkrantz in ”Motor Bladet” November 1977 tells, that he achieved place 4 at the Danish Long track Championship at Korskro, and that he in the winter 77-78 participated in ice racing. 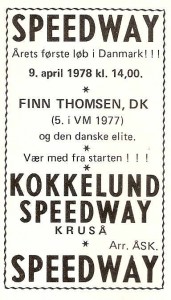 Advertising the opening meeting in 1978. In a report from the
club’s general assembly we found, that it was unable
to absolve the above advertised meeting. 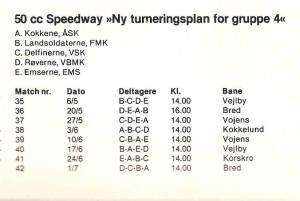 The tournament table for 1978 gave the mini team only one meeting at home..

The team ”Kokkene” (the cooks) joined the moped speedway tournaments in the 2nd division in 1977 og 1978. The team also was on the preliminary list for 1979, but is not to find in the ranking lists for that year.

Besides the mini team the club had a 500 cc team named “Makrellerne” (The mackerels) which in 1978 finished fourth in their group, and last in 1979.

The scheduled opening meeting on April 8. 1979 at Kokkelund got cancelled.

After the closing of Kokkelund speedway the club from the municipality of Aabenraa town got permission to build a new track in an abandoned quarry 6 miles south of the town and half a mile away from the high road.
It has been said that  track, which by the local people was called ”Kiskelund”, in early 1980 was used for a few meetings in 2. division 500 cc. and as a traffic scool for mopeds, besides general sport activities.
When i got abandoned we do not know, but info this regarding shall be most welcome..