In the newspaper Bornholm’s Tidende of the 16th of August 1939 could be read that Bornholm’s Motor Sport intended to organize a grass racing meeting on a stump mark on Braendesgaard’s site in Ibsker. The board of directors had been in Kolberg Germany to negotiate the participation of German riders in the Bornholm grass meeting.
However, the time was too short to have it arranged, but it might be possible the following year.

In view of subsequent events, the Germans are likely to have thought on other matters than a grass racing meeting on Bornholm. 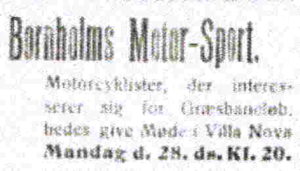 The organizers’ bustle is illustrated by an advertisement published in the Bornholm’s Tidende on 25 August. searching for interested motorcyclists to join.

Minutes from Bornholm’s Tidende d, 4/9 1939,
cropped and edited and by Soeren Kjaer.

The first race was run at 250 cc. machines over 6 laps at 600 meters. Orla Johansen won 4,08,1, strongly pressed by Ole Holm in 4.11,0.
Second race was for 500 cc. machines over 4 laps. Poul Larsen immediately lead for 3 laps, when Borge Andersen’s bike suddenly woke up to deceit, and in furious speed tailed the leading Larsen, who had the advantage of the inside in last bend and won 1 second ahead of Andersen. The third competitor of the race retired after 1 lap with engine failure.
Third race was for rookies up to 750 cc. It was not very exciting. Ole Holm rode outside competitions and excited the audience with his fun performance. Konrad Petersen won in 2.50.0.
Fourth and fifth races both went over 6 laps. The excitement was gone when the winners led from start to finish.
Sv. Aa. Andersen won fourth race in the fastest time of the day 3.13.0 min. Ole Holm won fifth race, where the favorite Poul Hansen suffered a minor engine failure, and thus the glory of the race was gone.

During the break, while handicap was calculated, music was played from the loudspeaker, from which the race results were also served.

First handicap race went dramatically. In the second lap three riders lay side by side in a bend. Konrad Petersen, who was last in the group, wanted to overtake them, but got too much speed. The bike skidded out and slided far in the grass. Poul Larsen tried to pass outside, but his bike got a rise, and the two bikes collided in a huge cloud of dust and smoke. Suddenly Larsen came flying out of the cloud and landed head first 20 meters away. The race got stopped and judged void.
Apart from minor bruises on Petersen’s one leg no one got injured. But both bikes got wrecked.
Second handicap race was won by Robert Elmkjær in the time 3.45.5, and the third was won by Poul Moller in the time 3.19.0.

After the race there was a party and prize-giving ceremony in Braendesgaardshaven.

This meeting was the very last meeting before WWII stopped all motorsports events in Denmark.

Nowadays Braendesgaardshaven is known as a hotel and restaurant with a great fun park. (Wikipedia)

If you posses any information, stories, pictures or other material regarding this track, you kindly would make available for this website, Please do so by proceeding to the contact page
or by using the e-mail adress: sk@speedwaylife.com
Thank you very much in advance.