in 1924 the “Farris Society” donated an approximately 20 inches tall cup made of forged silver to the club “Motorsport”. It should be given in property to the rider in the middle motorcycle class *), who on the great raceway in Glostrup west og Copenhagen could win it three times in total.

*) the middle motorcycle class was equal to what later got called Standard 500 cc.

The Glostrup raceway was in its time a gigantic prestige project, and obviously there should be international prestige in winning this great and very costly piece of silver. It should be difficult to win it, and the race distance was set to 20 km., equivalent to 12 laps on the 1666 meter long oval.

The first winner of the trophy was the Danish rider Georg Hansen, and he repeated this in 1925. 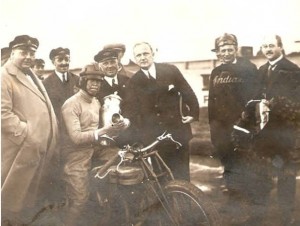 Then tings went wrong for the Glostrup Track, which due to financial trouble was unable to absolve meetings in 1926 and 1927.

In 1928 some money got raised, so a meeting could be held. Those days most famous Swedish rider Gunner Kahlén won a share in the trophy in a boring race with only seven riders.
The poor number should no way diminish his performance, as he rode the 20 km. with an average speed of 104 km/h.

Then the Glostrup track closed, and the club “Motorport” got dissolved. The Trophy was handed over to
“The Sports Motor Club”, who after some negotiation got a meeting placed on Amager Trotting Track.

September 22. 1929.
The race distance was still 20 km. equal to 16 laps of 1250 m. Further besides the final there were other classes riding over 5 laps. All together it was something, that strengthened to public  interest in the meeting.
Gunnar Kalén’s friend and hardest competitor, the Swede Ivar Skeppsted, nicknamed ”Skepparn” secured his first share in the trophy.

The Norwegian Rider Paul Sande is registered as winner in 1930

A step was taken away from the standard bikes, as the methanol powered engines from J.A.P. was adopted, among others on motor cycle makes  like British Excelsior and Suecia. 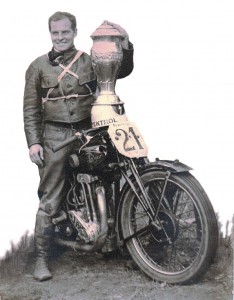 Aage Wagner with the trophy in 1932

Amager Trotting track was not available for Farris meeting in 1933. Therefore The Sports Motor Club, after in vain having applied for permission to use Charlottenlund Trotting Track, decided to allocate the meeting to the Dirt track at the new motor sports resort at Ganlose.

The defending holder of the trophy Aage Wagner filed a written protest against the decision, feeling that the somewhat primitive dirt track by no means could be regarded a decent venue for this prestige filled race.

He deposed the trophy until the protest could be dealt with, which could not be done before the meeting had to be absolved.
However the showed good sportsmanship by signing in to the meeting in Ganlose. 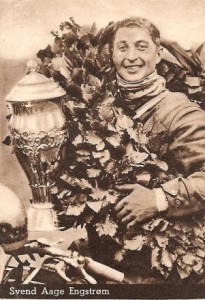 Svend Aage Engstrom with the Farris tropy in1931 (left) and in1933 with the Ganlose cup.
The similarity between the the two cups is clear, only small differences in the ornamentation.

The Sports Motor Club acted swiftly and secured a copy of the Farris trophy, which of course got named the ”Ganlose Cup”. Svend Aage Engstrom won, while the Farris trophy had to wait another year.
Wagner retired early from the meeting after a crash.

Then the meeting returned to Amager Trotting track in 1934 and 1935, where Ivar Skeppsted won both and secured the Trophy to his property.