The Motor Sports resort at Ganloese opened in 1932 as a consequence of a law that banned all kinds of endurance and cross country motor competitions on Danish roads. It closed in 1939 at the outbreak of WW2 and never got re-opened after the war, Since then the area has been declared under environmental preservation.

Satellite view of the Ganlose resort, 2008 The sharp bend on
Hesselvej (Hessel road) and the lake are clearly seen,
but no signs of the tracks are left.

In the hilly area at the sharp bend of Hesselvej ( the Hessel Road) between the villages Ganloese and Slagslunde 20 km northwest of Copenhagen, a scramble trail was laid, and a track for car racing surrounded a lake, and a dirt track got erected. The hills were well suited for trial sections.
The number of spectators often reached 8000.

A scramble race in 1934. The riders on the picture cannot be identified,
but it gives a good impression of  the height difference, which was 43 meters.

A view from the public’s stand. (newspaper clip)

It is uncertain when the dirt track opened. Officially it was on Sunday September 5. 1937, but there are evidence that Baltzer Hansen won a dirt track race there on May 25 1935, and Svend Aage Engstrom won the Ganlose Cup in 1934.
An undated newspaper clip tells that Morian Hansen was denied entry in a scramble race, because his JAP bike had no brakes. Instead he rode on the dirt track, where he won ahead of Svend Aa. Sorensen.

As an all round driver Morian Hansen also drove in car races at many occasions in his Ford 1932 model. 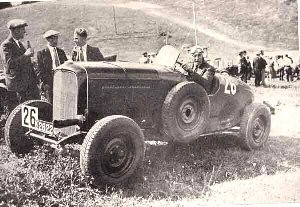 Always insisting to ride with number 13 on his bike and race jacket.
On his car he had number 26 = double 13.

Another of the champions from those days, Svend Aa. Engstrom enjoyed success on the Ganloese dirt track too, as can be seen on the picture below from 1934.

If you think the Ganlose Cup looks like the Farris Cup, it is correct.
The cups were identical.

The local hero Ejnar Knudsen  often equaled the best of the guests on the dirt track.

Chr. Christiansen on his Ariel bike at Ganlose 1935.

Engstrom in action at Ganlose

Near the end of the 30-es things appeared to go wrong for the track. DMU’s magazine Motor Bladet wrote that on September 11 1938, the referee cancelled a dirt track meeting due to poor track condition making riding too dangerous.