Randers Motor Klub celebrated on April 11 1987 its 50 years anniversary. Earlier there was a club with the same name in the town, but that closed already in 1932, when competitive motoring on public roads got prohibited by law.

The new club had the majority of activities in the open landscapes like hill climps, scrambles and moto cross. Track racing like long track and speedway got adopted in 1947 when the club got a part ownership in the “Jydsk Motorbane” Ltd near Hobro, until the track got abandoned and sold in 1956.

Meanwhile in 1954 the club acquired a site 4 miles south east of Randers town near the Fladbro Inn and the river Guden. Same year on August 8 the speedway opened in the presence of a huge crowd of fans. On his JAP bike Aksel Müller rode the first track record in 81,6 seconds. The latest track record by Claus Vissing on 65, 5 second clearly illustrates the immense development the track, the bikes and the riders have been through since then. 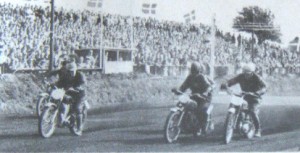 Picture from the opening in 1954. Note the huge crowd on the terraces

The webmaster of this site has good memories from the track where in 1982 I passed my test for an official A-license, and where I absolved my referee job no. 100.

The Speedway league on Fladbro.
Randers Motor Sport joined the Danish Speedway League in 1991 with Fladbro Speedway as home track, and finished 6th.

The only change in the 1993 team was Mogens Hansen being replaced by Jan Staechmann. After two years finishing 6th this year the team finished 7th.

Hans Nielsen was the top gun in the 1994 team, which also included Henka Gustafsson from Sweden and Ejnar Kyllingstad from Norway. This team won bronze medals.

The 1995 team kept mainly the same riders from 1994. Unfortunately financial problems came up for the club, who could not afford to pay for the most expensive rides like Nielsen and Gustafsson. In a number of meetings the club was forced to use guest riders or riders from 2. Division. It was doomed to go wrong, and it did. The team got relegated from the league.

In 1996 the speedway section got separated from Randers Motor Sport, which continued as a moto cross club.

Kronjyllands Speedway Club (KSC)
A new club named Kronjyllands*) Speedway Club got founded with Fladbro Speedway as home track. The team rode in 2. Division in the Danish tournament, and the revived the tradition with the annual St. Johns meetings
*) Kronjylland = Crown Jutland.

Kronjyllands Speedway Club re-entered the Danish Speedway League in 1997 and brought league meeting back to Fladbro with 3 home matches. The team however was without any star rider. The only foreigner was the pole Robert Dados. Unfortunately the team got no match points at all and finished once again on the relegation place.

The speedway league was in 2001 an open league joined by a team from Sweden (Gothenburg) and one from Germany (Güstrow). I 2002 it returned to be a purely Danish league, to which KSC returned with GP rider Brian Andersen as captain and forever young Jens Peter Nielsen as team manager. Sadly the team again finished last, however now without relegation. ½ Hence KSC once again joined the 2003 league with a new team and the same team manager, and once again the same sad story happened.

Still not discouraged KSC joined the 2004 league with the Russian Roman Provaszny to reinforce the team. Despite two wins at the end of the season the team finished last.

That concluded Fladbro Speedway’s status as a league stadium at least for the time being. KSC has not ridden in the league since 2004. But still there is full activity in the various divisions for 500 cc, 80 cc and 50 cc, not to forget the annual St. Johns meetings

A record, not likely to be beaten.
An unbroken row of more than 55 years has never been surpassed, and the track is still active – not always on the highest level, but the track never lay idle.
The jubilee year 2004 got through a number of happenings, used to commemorate the many events on and around the track. 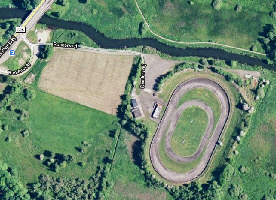 A satellite view of the Fladbro track. A few yards from bend 1 and 2  the smaller stream
Norre aa is merging with river Guden just outside the right edge of the picture.
In the top left corner, the Randers Road is crossing over the stream
on a flat bridge named Fladbro (= Flat Bridge).

From the introduction in 1973 og moped speedway and on to 1977 the meetings according to a dispensation given by the control board got ridden on the 370 meter long track, but then a 210 meter long track with a straight width of 9 m. and a bend width of 12 m. got built on the infield for this purpose. A. o. the 80 cc. Danish Championship Final 1992 got staged there with Anders Martiny from Fjelsted as winner.

The old referee’s box – a tiny wooden shed – which stood since the opening day got replaced by a two-storey cylindrical tower. Actually it is a modified agricultural steel silo with a press room in the ground floor and the referee’s box on top, overlooking the track much better than the old shed did. 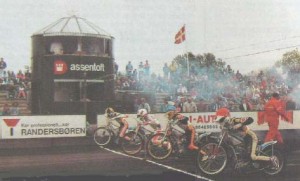 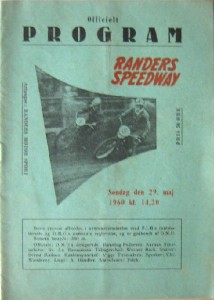 From mid-fifties on to approx. 1960 the programme covers looked like this.
Only the color changed. 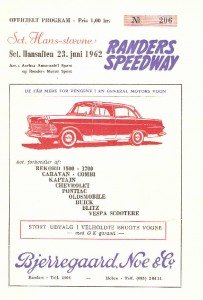 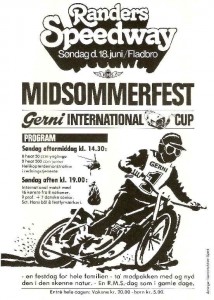 Celebration of midsummer around St. John’s night has been
traditional through many years at Fladbro

June 22. 1975 St. John’s meeting
A match between a Danish select headed by Ole Olsen and a British team from Hull. 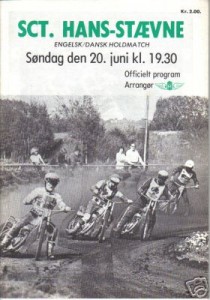 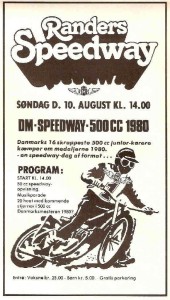 These 6 qualified for the Nordic final on June 22 in Brovst, with Jan Jacobsen as reserve. Later the same year Jan O. reached the ultimate top at Nya Ullevi i Gothenburg 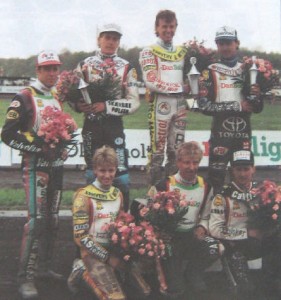 The qualifiers for the Nordic final on June 22. in Brovst, with Jan Jacobsen as reserve.
Later this year, as well known Jan O. reached the top at Nya Ullevi, Gothenburg

All in all 1991 was a busy year on the Fladbro track. The qualification above besides a semifinal in the Danish Junior Championship, 3 meetings in the league and a 80cc meeting with 3 groups. 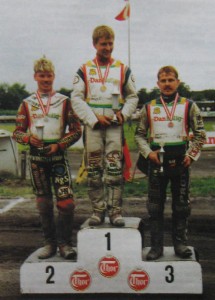 Final 2 on May 31 in Fjelsted. Hans Nielsen champion on aggregate points. 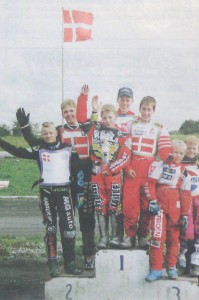 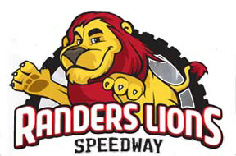