Updated in cooperation with the Norresundby / Sundby-Hvorup local historic society.
Frank Larsen, Aalborg, has contributed to this page with articles. 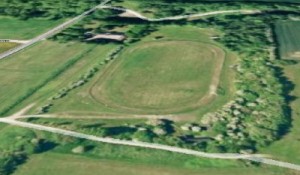 Satellite view of the Lindholm track 2008.The tall bankings to the right,
now fully overgrown, gave spectators an excellent view over the track 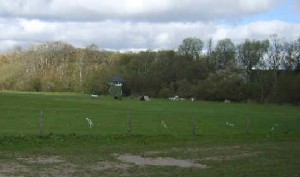 Eyelevel picture of the Lindholm track with the agility obstacles.
(photo 2010: Per Thomsen – Sundholmeren)

15000 spectators flocked to the opening meeting at the Voerbjerg speedway, where North Jutland Motorsport organized the season’s first and largest meeting with over 30 participants in different classes. The riders expressed great satisfaction with the track, and the only drawback was actually after the event, where the large audience went off. Hundreds of cars and motorcycles raised huge clouds of dust on the road, so people were exposed to more dirt and dust than during the meeting itself.

Results: All starts over 4 laps.

Under the headline below the newspaper Aalborg Stiftstidende on brought a report from the Lindholm meeting the day before.

Translation: A fine motor day on an almost dust free track. Track record by Nellemann and many exciting races.

Behind this statement lay an action which nowadays would be regarded criminal. To prevent dust the organizers had sprayed 45 tons of waste oil over the track surface. It might have been legally those days. Had it been today the spill of 1 liter oil would require the race to stop until the polluted soil had been scraped away and disposed off in a secured way. Indeed times have changed!

While the fans could enjoy not to get their hair and clothes dusted, they could watch Robert Nellemann from Randers improve Knud Nielsen’s one year old track record, from 1, 42,3 minute to 1,28,0. The junior class gave a result seldom seen when Ove Floor from Randers and Johannes Jensen from Silkeborg simultaneously passed the finish line and got judges “dead run”. Home rider Jens Nielsen came third.
The standard 500 cc class had so many riders signed on, that it got necessary to split in two groups.
The first group was won by Ernst Osterlund from Silkeborg ahead of Aksel Jensen from Aalborg and Leif Hirsborg from Copenhagen.
The second group went to Viggo Thomadsen from Randers with 21 years old Kjeld Jensen from Silkeborg and Lykke Sorensen from Randers.
N. O. Jensen from the home club won the 350 cc class in front of Svend Larsen, Copenhagen and Aksel Vorre, Viborg. Finally the sidecar Champion of Jutland Rasmus Kornum won his class with the Nimbus rider Josef Koch from Copenhagen in second place.

Aalborg Stiftstidende announced the meeting on May 3rd 1951 on the Lindholm track.
Note they still used to call the race Dirt track, even the modern name
Speedway gradually had been adopted all over.

The report in the same newspaper the day after the meeting had the headline above.
In translation it says: Colorless motor racing in colorful surroundings.

The reporter would give the readers an impression of the big crowd of 12.000 spectators in their multi colored spring clothings covering the bankings. But the heats were colorless because the difference in the rider’s strength caused lack of tension and excitement.

46 years old Morian Hansen had a successful attempt on the Norwegian Reidar Jensen’s track record on 1,32,9 minute. Despite Morian did not ride exceptionally well that day he manage to cut 2,9 seconds of the Reidar Jensen’s record. 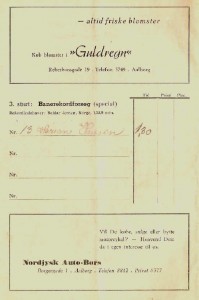 Here is the evidence of Morian’s track record,
(Contemporary programme filled in by Orla Knudsen)

Aalborg Stiftstidende wrote that Morian was 54 years old. If this had been true it really would have underlined his achievement. It was 8 years too much, but a fine effort anyway. Two years later, aged 48 Morian stopped his career by a farewell race at Gladsaxe Speedway

In 1951 the track got closed, allegedly due to insufficient safety fences.
No one had however thought that it would take five years before it was re-opened . But it actually happened so.
The reason is said to be that the Police Super Indendant of Northern Sundby was an enemy of Motor sport and delayed answering applications in eternity, or left the answers to a deputy with no authority to decide anything. 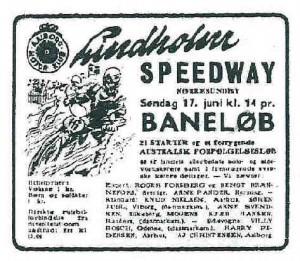 Nearly 7000 spectators flocked to the track where Aalborg Motorklub arranged the re-inauguration meeting with a variety of strong riders in different classes. The track got renamed Lindholm Speedway and had been changed in the bends which had become slightly narrower and sharper. A disposition which got criticized in the Motor Bladet’s report .
The riders however had only praise for the track, and so had DMU’s delegate Henry Sørensen from Silkeborg. Sundby – Hvorups municipality was represented by parish council chairman Aage Andreasen, who declared the track reopened, and the city council expressed regret of the closure in 1951. .

Apart from motor cycle racing Lindholm Speedway also staged that particular form for automotive racing called “Demolition Derby”. Meetings for reinforced scrap cars with the purpose of putting so many contenders as possible out of the competion by hitting then, turning them upside down or around. A kind of automotive free style wrestling, which also other tracks included in their programmes to help the diminishing number of spectators
The fun for the fans could be great, but the sporting value was not. 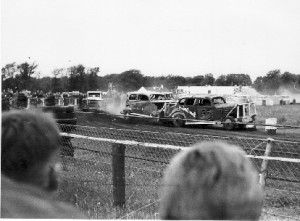 A mere 2000 fans attended the meeting on a rainy day and witnessed a lot of falls, all without personal injuries, on a very slippery track. From a sporty point of view the day was of low value, and the organizers saw their possible earnings washed away in rain and mud. 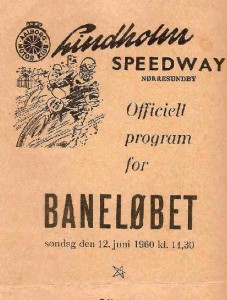 A newspaper report from this meeting said that the number of spectators was disappointing. Only 9000 attended the race.
Which club today wouldn’t be over the moon with such number. More heats had 7 or 8 riders on the track, which explains the high scores. 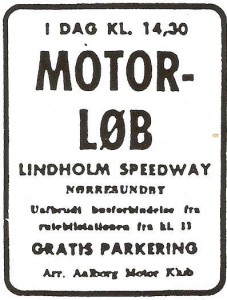 This modest 1 column advertising for the meeting on June 12, 1960
did not catch many fans. 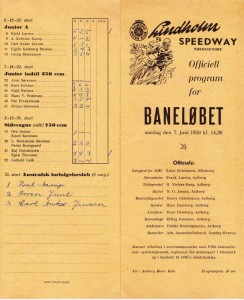 The newspaper headline focused on the number of spectators,
and a Jubilee rider being hit by engine failure

Aalborg Stiftstidende reported from this meeting that the track was too dry and a mere 4000 fans attended. Christian Christensen from Aalborg made an attempt on Soren Juul’s one year old track record but failed by 0, 9 second.

The JAP rider from Odense, Hans Otto Riis came to celebrate his 50th meeting in the special 500 cc class.
After his first 3 heats things looked well for him, but while riding out for his fourth heat, the engine sprocket worked loose and his engine revved up too high and damaged the valves. Disappointed he had to retire and settle for second place after Ole Thygesen Dahm.

After the closing of Lindholm Speedway plans got forwarded to erect a Stadium for the Lindholm Athletic society, but preservation plans excluded the building of a large club house. Hence these plans got discarded. In 1972.  The Jutland Greyhound Club got the opportunity to build a track for dog racing, and there was room for other sorts of dog training as well